Where in the world is the Balcony Garden?

Jodi of Bloomingwriter set everyone some geography homework - a post on the place where you live. The homework was to be ready for the end of February - and guess who had to ask for an extension? Well, it was a short month, wasn't it? Not fair.

But this morning, with the excuse that I had to go to the Consulate and get my passport renewed, I zapped round town taking photos. So here goes ...
Milan is in the north of Italy, in the Region of Lombardy. Go north and after about a forty minute drive, you're at Lake Como (drop in and say hello to George Clooney while you're there)and the border with Switzerland. Well, forty minutes if the motorway isn't blocked with traffic, that is.
It's an industrial area, with fashion and design (especially furniture design and production) playing an important role in the economy. There was tradionally a lot of heavy industry, but like in much of the rest of the Europe, this is no longer an option. In its place, the local government is trying to promote the area as a centre for bio-technology and the service sector.
The climate is appalling - cold and foggy all winter and hot and humid all summer. Spring and autumn are definitely the best periods. 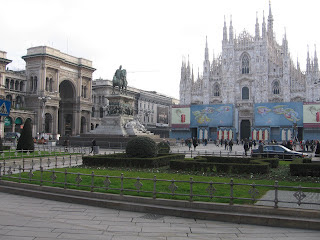 If you look at your guidebook, you'll probably see that it advises you to spend half a day in Milan - but only if you happen to be passing through on your way to somewhere more interesting. Milan is the commercial centre of Italy and has little in the way of tourist attractions. The exceptions are Da Vinci's The Last Supper (recently restored, well worth seeing, but you have to book months in advance) and the cathedral, one of the most amazing pieces of Gothic architecture in the world. It's nothing special inside, but go up on the roof and wander around looking at the hundreds of carved gargoyles and other features which make it, in my experience at least, unique. 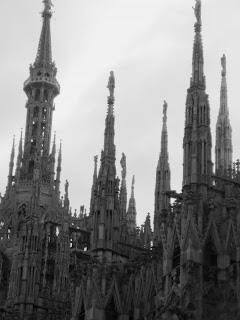 See the arch on the left of the Cathedral Square? That's the famous 19th century Galleria Vittorio Emanuele II. Lined with classy shops, restaurants and cafés (oh, and a McDonalds, which provoked considerable public consternation when it opened a few years ago) the Gallery is perhaps the real centre of Milan, and a place to see and be seen. When in Rome, do as the Romans do – when in Milan, sit and have a coffee in the Galleria. But only if you have an extremely healthy bank balance. 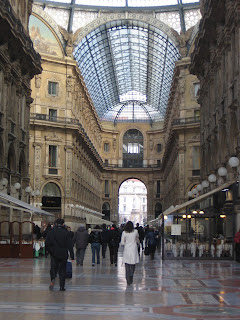 Built between 1865 and 1877, the Gallery is built in the form of a cross. The centre is covered by a 164 ft high glass dome, from which the architect, Giuseppe Mengoni, fell to his death only two days before the gallery was officially opened by the King, Vittorio Emanuele II. 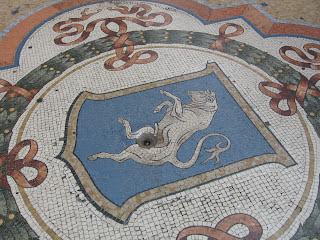 Just to one side of the centre, you’ll notice a mosaic of a bull in the marble floor. Look closely and you’ll see that a certain part of his anatomy has been worn away – and you’ll probably see a little crowd of people queuing up to stand there on one leg and twizzle around three times. Try it - it’s supposed to bring you luck. (Perhaps someone should have told that to Mengoni). 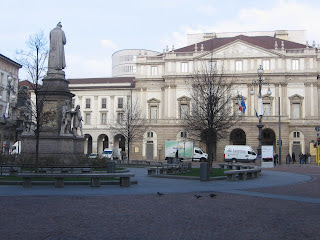 At the other end of the Galleria you'll find yourself in Piazza della Scala, looking at the opera house - this time far more impressive inside than out. The gentlemen on the left of the photo with a pigeon on his head is Da Vinci. 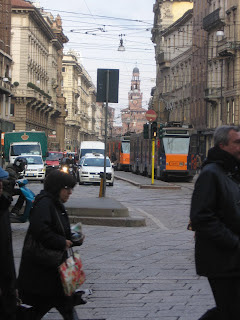 Still in the centre you might want to nip up to the castle (that's it at the end of the road) or walk along the pedestrian shopping area of Corso Vittorio Emanuele to Piazza San Babila, where you'll notice an odd pineapple looking thing, a fountain and a few bushes topiarised into humps. You've got it haven't you? It's a representation of Lombardy - the mountains, the lakes and the hills. 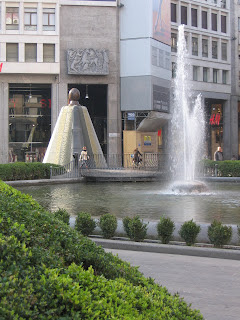 And from there it's only a short walk to the shopping streets of Via Montenapoleone and Via della Spiga. I know, I know - it's hard to choose between Valentino, Prada and Armani, but remember ... you've only got half a day, and there's still the old area of the Brera to visit. There you'll find the main art gallery of Milan, the Pinacoteca di Brera, which is home to several paintings well worth seeing, including Mantegna's Lamentation... 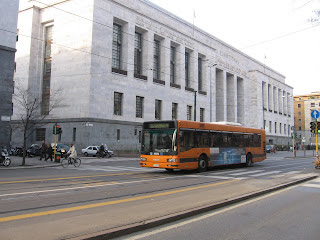 Wandering around, you will see some interesting architecture - like the Central Station or the Law Courts (above) both typical of the Fascist period. But mainly Milan is a city of apartment and office blocks, mostly ugly ones. There are 7,000 inhabitants for every square kilometre, and about 1.3m in all. Which means building piled upon building, chaotic traffic, almost no green spaces and dreadful pollution. In theory you can see the Alps from Milan. In practice it only happens a few times a year, when there's been a particularly strong wind. 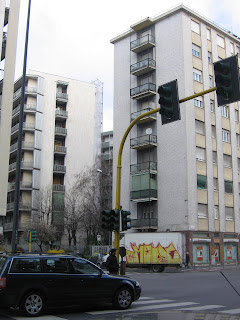 We're lucky - we do at least have a strip of garden between us and the next block .... 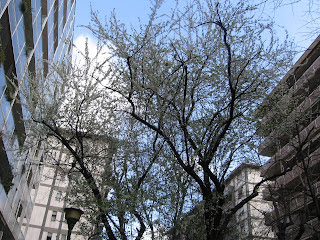 ... other people have to be more creative. This garden is eight storeys up. 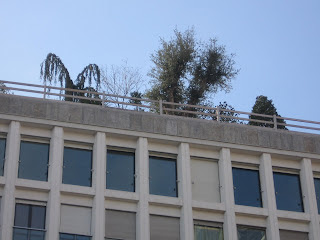 Milan doesn't have a river, so there's not even that to break up the monotony. There are some canals, though most have now been covered up, and I'm lucky enough to live right by one of them - the Martesana. Along the Martesana is one of the few cycle paths in the city, and it takes you right out into the country.
So what's good about Milan? Not a lot.. The health service is excellent, and the transport system works extremely well, but that's about all I can think of. Not, of course, that the average Milanese would dream of leaving their car at home and taking the bus. But with four metro lines and an overground system of buses and trams, it's very easy, and very cheap, to get around. The trams come in various shapes and sizes from the old ones - which are slow, rattly boneshakers, freezing cold in winter and stifling in summer but with loads of character - to the new ones - supposedly high-speed, but actually not as they're always stuck behind the old ones. Not much character at all, though they have sweet little noses, but they do have heating and air-conditioning. 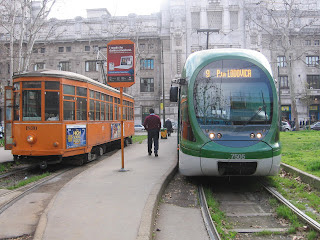 In case you haven't worked it out yet, I don't like the place. But then I don't like cities. Full stop. Unfortunately, my husband does ...
OK, that's enough. My homework was late Jodi, but I wrote more to make up. Can I have an "A" please ? :)

I've been to Milan a few times. You've summed it up pretty well - a nice place to visit, but...

I did love walking on the roof of the Duomo. It's a memory I'll have forever. And the Galleria is a great place to wander through. High-end shopping isn't me, but here's plenty of OTHER shopping to be done and plenty of deals. And we've had some VERY memorable meals in Milanese restaurants.

Milan does feel a bit more industrial than "big city" cosmopolitan Rome, but, hey, it's still Italy – the art, architecture, history, food and people are spectacular!

What a post! Sue, your wry and honest look at the city where you live was both informative and fun to read. But for equality's sake, I hope you get to enjoy some country life one of these days.

I've seen a lot of bronze statues with one shiny area that's been rubbed for luck - spinning for luck looks even weirder!

I'm sorry that you don't enjoy where you live. Wow, that bull sure has deteriorated in 10 years (the last time I was in Milan). Yes, it lacks the history of Rome, the charm of Firenze, the livability of Lucca. But Lake Como is such a close weekend spot that it might make Milan bearable for those who long for grass, trees & flowers. Its climate is no where near as extreme as Northern Illinois. (I hope that makes you feel better.) But I agree with you, I'd rather not live in a city (been there, done that).

Wry and honest indeed! Sue, this was fun, especially to see that remarkable Gothic architecture vs the Fascist period stuff. I'm glad I gave an extension, that you found time to do this, and you definitely get an "A" Bravo!

Jim - yes, you can eat well. If anyone is coming to Milan let me know and I'll give you a list of my favourite restaurants!

Mr M's Daughter - the local Council fill the hole in every couple of years. I suspect they use fairly soft cement though, because the whole attraction is seeing it wear away!

Jodi - thank you! I shall treasure my "A" - and the blue poppy award!

Hello Sue. Your GBGP brought back memories for me! I spent a summer teaching in Lugano. We took a weekend trip to Italy with our students and we spent a day in Milan. I went kicking and screaming because I had to chaperon a gaggle of 12-13 year old girls. Everything that could possibly go wrong did. Now I can look back and laugh--it was a very long time ago.

I was in Milan 2 years ago but only for an hour or so waiting at the airport for my flight to Florence. Haven't missed much I see except for that gothic dream! :-)

Hi Sue,
what a nice post about Milan. I like that city - I used to go there quite often when I worked in the fashion business - you know the fashion fairs... Great times!
/Katarina at Roses and stuff

So I can scratch Milan off my list of places to visit, then? When the spouse decides he really does want to retire we'll be too old and feeble to travel anyway [only half-joking here].

Thanks for the tour!

Sue: I'm so glad you took photos of the magnificent architecture in your city. Beautiful buildings and exciting history.

It is too bad you aren't a big fan of where you live... just to say the word Milan sounds romantic ... but isn't that always the way?

This was a great post to read and I'm glad you made it under the deadline.

You haven't put Milan on my list of must-see cities, that's for sure. But I certainly enjoyed seeing it through your eyes. Your descriptions are almost as good as being there. Well, in this case, maybe better.

What a great post, Sue. I don't blame you for wanting something a bit more "country," but your feelings for the city came straight through. :)

I would, by the way, visit Valentino, and then Prada (but I may walk right back out again if they were in a "bad Prada" phase versus a "good Prada" one, as my friend Jess and I assess) and then Armani. But of course I wouldn't be able to afford anything in any of the three! lol.

A very interesting post Sue! I was thinking, like Meems, that Milan conjures up ideas of romance..perhaps just because it's in Italy.
In spite of the fact that you'd rather be in the country (amen to that!), you've shown us that there are some fascinating aspects to the city. There's beauty everywhere if we look for it, isn't there?
That poor bull! :)