Form and Colour, Colour and Form 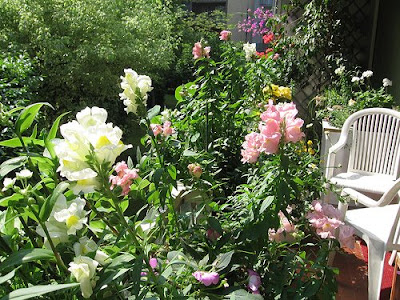 Whoops - how to lose friends and alienate people. I didn't mean to, honest, but some of you obviously thought that my last post was intended as a rant. It really wasn't and I've tried to explain why in the comments, but I'm sorry if I offended anyone. For the record, I have absolutely nothing against the people who created those balconies or against anyone who has the same attitude to balcony gardening. They're wonderful, and certainly contribute more to making the community attractive than mine does. 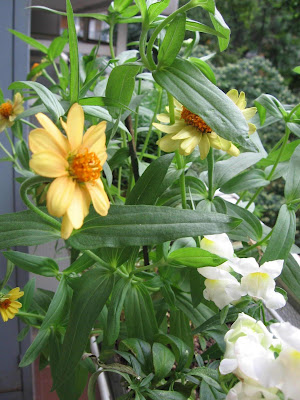 But as an attempt to redeem myself, I thought I'd talk about how I do try and create visual impact with containers, while at the same time growing as wide a variety of plants as possible. All my containers are different, but within each container I try and achieve an effect either by combining different colours and/or different forms. 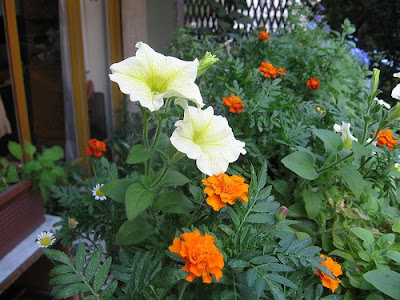 Here's an example from a couple of years back. Very simple - marigolds and yellow surfinias -but it worked wonderfully. The stark browney-gold of the marigolds both contrasted with and complemented the lemony yellow of the surfinias, as did the different forms of both the flowers and the leaves. And they're both set off by the little white daisies peeking out from behind. 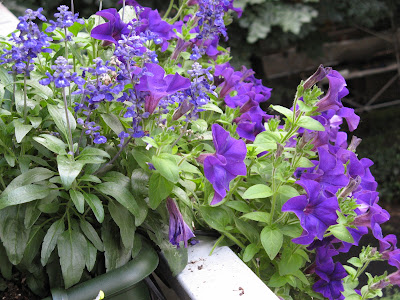 This year my most successful container had flowers of one colour only - but with completely different forms : surfinia again and sage (though I'm ashamed to say I've forgotten which one). The photo doesn't really do it justice - the purple spikes of the sage towered above the trailing surfinia, and it looked superb, both from below the balcony and from behind. 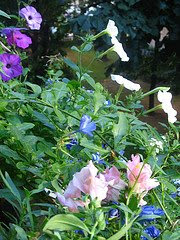 I love purple and have a lot of it on my balcony. In this photo from last year, purple and white surfinia mix with pink antirrhinums and blue plumbago (all grown from seed except the plumbago) - again creating harmony and contrast of colour and form.

Purple is one of the few colours I really like using together with pink - especially dark pink. This photo was taken early after planting - imagine them when they'd grown and filled out the spaces. 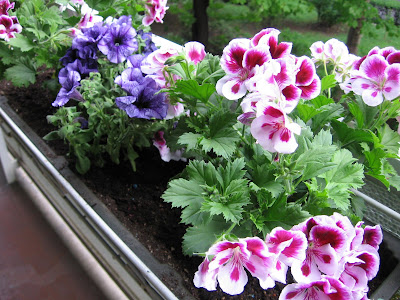 So my balcony's a hotch potch. I also admit that I usually plant thinking of the view from inside rather than below. And these photos range over three years and were, admittedly, taken when things were looking good. They hide the tatty failures. But I still think they stand up to the ones in the last post, stupendous as they were. And I promise you they're more fun to grow. 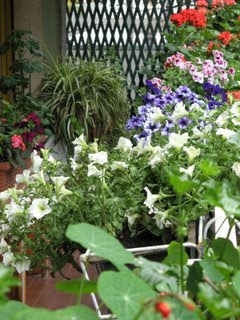 I love one-color containers. It makes a focal point in the garden.

I missed that post so I will have to backtrack and read what all the fuss was about!

I'm chuckling as I write this because after I read the balcony post I knew that if someone were to describe mine, they'd say it was a garden that overstepped its boundaries. I've more of a terrace balcony and there is nothing but vegetables coming out of the planters (rucola, mizuna, attempts at baby radicchio, thai eggplant, thai basil, oh! and japanese shiso). The only flowers that I have are dwarf sunflowers in a tiny pot and some sort of pink-flowered succulent that I've no idea what it's named.

You can imagine what the neighbors think with their begonias and whatnot hanging off their balconies, but I'm somewhat of a maverick so.... ;-)

I didn't realize how "unique" my terrace looked until I viewed it from my neighbors balcony that lives above me. The first thing out of my mouth to my husband, "Boy! There's sure a lot of green color down there. You think the person that grows all the vegs will share some with her neighbors?" LOL!

Beautiful shot. What a beautiful garden!!!

You didn't alienate me. I understood perfectly why you'd prefer a more challenging garden.

compost in my shoe said...

Remember we are all gardeners and all have opinions based on our "garden reality". One of the points to this whole blog thing is to hear about those differences.

Kudos to you! Transparency means saying your say. Don't worry what the crowd thinks. It isn't about them. Its about you! Cheers.

Sue,Your blue container with the surfinia and the sage looks great! Blue sage...who could r esist tht?
I'm wondering about the size of your balcony. It must be quite big, by the look of things.

Sue .. I'm sorry I haven't been here more often. I lost my way ?: )
I love the way you do your plantings .. that is what I do in my garden .. a specimen garden .. a plant zoo is what I have .. so many new plants that I discover .. well I can't live without trying them ! .. I do try to keep it pleasing to the eye .. but you know how some plants can collide .. life happens ! LOL
Great post .. and don't worry about offending people .. be yourself .. you are fine !

I read your post and didn't think it was a rant. Feel free to say what you think! I think your blog is unique, by the way. Keep blogging.

Hi Sue- good to finally "meet" you and your blog!

I do lots of deck gardening and am looking for something to start in a container that would climb over an arbor. I had pretty much decided on a trumpet vine until I read your post. My kids are terrified of stinging insects and a wasp convention would be a disaster!

You've also inspired me to get a little more creative with my containers - such great ideas here.

Thank you for finding me. I hope you will visit often. I am primarily a container gardener because the guy that cuts my grass whacks like tony soprano. Still, I really like the little plants and they usually their presentation.
I'll be seeing yoU'
P.
http://sicluceatlux.wordpress.com

Hi! Nice to meet you
Beautiful stunning colours here. I love the balconies of the European countries.
lOved the seed pods too.

Hey there Sue, pleased to meet you. Thanks for stopping by. How exciting to find your lovely gardening blog and a gateway to so many more. We haven't really started 'gardening' here yet, just kind of taming the immediate landscape and a few pots. I can't wait to get started and I'm sure I'll be stopping by here often for ideas and advice. I really enjoyed the 'balcony debate'. Amanda

Lovely gardening Sue! Thanks for visiting my blog and commenting :)
sorry about your zucchini
xo

Thanks for all your great comments, and welcome o everyone who's not been in before.

Roses - no it's not that big. I actually have two - front and back of the flat. But they're each only 10x1m. Then I sneak a few containers onto my office balcony too, but not many this year. Next year I'm going to transfer more - the home balconies are just overflowing!

Hi Sue, You containers are wonderful and I am sure they give you great pleasure. The limitations of your balconey have not held back your creativity!

Come visit me at my new wordpress blog so I can add you to the blogroll ;-> I comment on the blogger blogs using the blogger url, so much easier, but am only posting at the wordpress one.

Your containers are ALL beautiful. This is one area of gardening I am not so good with and I appreciate when others are do such a great job.

btw. That picture of the jay is so interesting! I have never seen one like that before. Very pretty. Thanks for the info on Blotanical awards and I'll check it out.

beautiful balcony!!! your plants are all so green, how do you manage to avoid/get rid of all the pests?! i'm always fighting against the malicious whiteflies...

searching google I came upon your beautiful balcony garden.It is so inspirational. I to have a balcony garden and every year the dominant color is different. This year I also planted one tomato plant, green red and yellow pepper and green onion.I have already lots of tomatoes the rest will see