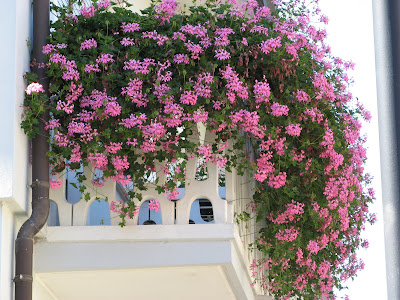 What makes for a good balcony garden? Is it the variety of plants? How healthy they are? The visual impact? 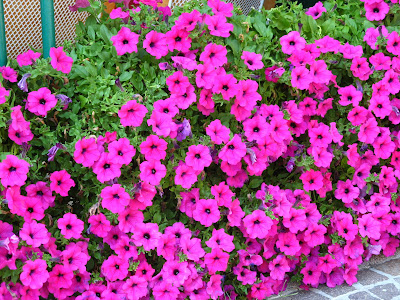 Probably the answer is all of these. But it's difficult sometimes to score highly in all three categories at once. Playing safe and only choosing plants which you know will do well often means a balcony with just the old favourites - pelargoniums, surfinia and, here at least, plumbago. Creating visual impact often means restricting the plants to just one or two colours. Going for variety can mean that half your plants are experiments that don't work and end up looking tatty. 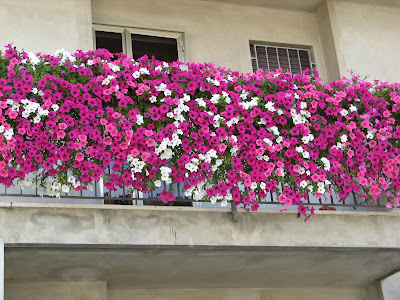 I'll cheerfully admit that my balcony definitely comes into the "variety at the expense of looking tatty" category, especially at the moment. It's the end of the season and even the plants which did well are looking as if they've had too much sun, fought off the pests for too long, and put out more blooms than they've got strength for. Those tell tale brown stems are starting to appear, and dead-heading no longer produces the same amount of flowers as it did a couple of months ago. And most of the experiments have just given up and died. Work on the balcony now consists chiefly of tidying up and pulling things out. 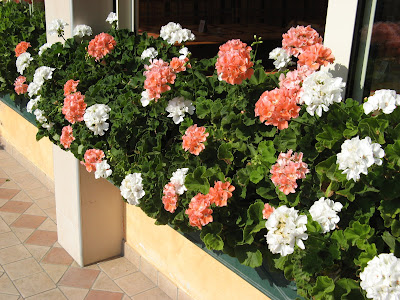 But while I was on holiday I came across some balconies whose owners had clearly gone for a different approach - visual impact at all costs. And some of them were stupendous, despite being incredibly simple and confining themselve to the old favourites. I loved the mass of pink ivy-leaved geraniums growing on the balcony in the top picture, and the strong colours of the ever-present surfinia too. And the salmon coloured zonal pelargoniums reminded me that my own, though they've been wonderful for several years, are now past their best. It's time to take cuttings and start again. 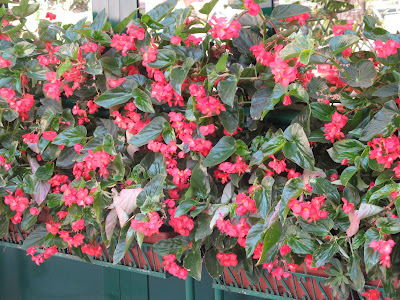 These begonias weren't quite so interesting, but better than the photo shows - as ever it's the problem of photographing red. 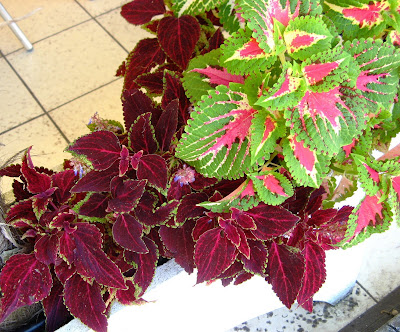 But my favourite was a balcony with no flowers at all - just leaves. A whole set of containers full of coleus, in an amazing variety shades and patterns. I've been meaning to grow some coleus for ages but not got around to it. Next year I certainly will. 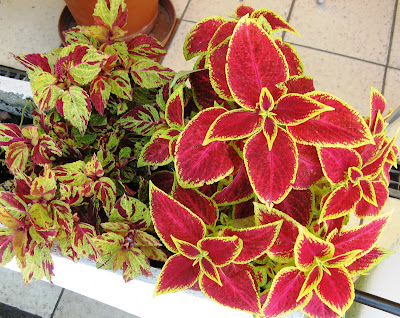 For me these single-colour, single plant balconies aren't what gardening is all about. It's just exterior decorating - though I admit that the condition of the plants on these balconies showed that their owners certainly knew how to keep them healthy. But it's a get-plants-from-the-garden-centre-and-throw-them-away-at-the-end-of-the-season approach which would, as far as I'm concerned, take all the fun out of it.

So my balcony will probably never smack you in the eyes like these did. A pity, because I enjoy the visual impact of plants too. But it would mean giving up too much. I'll stick with looking tatty.

I've been thinking about this same thing recently. My balcony has many many different plants. Those balconies look beautiful but I could never keep myself to one or two plants. Next year I am going to cut it down some and actually draw out a design and plan and hopefully not have some 90 varieties on my balcony. I keep on having the thought of visual impact plants on the outside but then all the 'tatty' plants on the inside so I can still enjoy gardening! Hope it works but most likely I'll revert to my every plant in the world ways.

Oh my these are beautiful! I love the third picture. This year I have gone overboard and bought too many variety of plants. As they grow bigger my deck runs out of space. Next year I will definitely try Coleus, they're beautiful.

Heh. I was just looking at a Dahlia that the caterpillars shredded and thinking...my garden did look nice when I planted it.

I'm going to have to disagree with you slightly. I absolutely love those minimal-variety, large-impact balconies.

However, you obviously really enjoy gardening and I can see how this might be boring for you.

Planting arrangements like these echo their "formal garden" counterparts -- ever seen the striking line of trees and shrubs at Versailles? If that's "exterior decorating" I'm all for it. As for buying up plants from the garden center and throwing them out at the end of the season? That's why they call them annuals. Gardening encompasses all flower planting and I think these container gardens are magnificent. Gives me hope for my own 11 window boxes. I've always gone with a "variety" but I think next year I'll try to plant a mass of one type of plant. They are just stunning. Thanks for sharing these wonderful examples.

Hi everyone - I hope I didn't give the idea that I didn't like those balconies. I did - as I said early on, I think they were stupendous. Just that if I did the same I wouldn't have the room for all my seeds and cuttings and all the other plants I want to grow. So I choose not to have that sort of balcony. I want to garden, and I can't if I only have one type of plant.
But that doesn't mean that I think it should be everyone's choice. If you don't want the seedlings and the experiments and all the rest, go for the colours. In fact some of these balconies were on houses surrounded by gardens - so their lucky owners had the best of both worlds.
All I was trying to say was that I can only do one or the other. My choice goes for the messing about with plants option. But if yours goes the other way, that's fine by me. It means I can enjoy looking at the results.

Hi Sue,
Big splashes of colour just make me smile - if you're watering it, it's gardening - if you're dusting it - it's decorating. Thanks for the welcome note - glad systems are a little faster today so I could come by and have a look.

Ho ho Barbara - if you have an enclosed balcony like mine dusting the leaves is as important as watering :) but I take your point - nice definition.

Sue, I just had to come see what the controversy was. Ha.. I think there is none. Just an interesting look at color and form. You are right in that you can't have it both ways. I love to see those balconies with one rich color pouring out of the rails especially with several in one place have different colors. I am like you though even if I had just a balcony to garden on I would have gobs of different plants. Lots of bloom and gloom even from time to time. I think Carol has a good idea about gardening with minatures. There are even minature shrubs you could incorporate. Heck, she has even inspired me to do a minature garden. I just need to find a spot for it.

Hi Sue, way to stir the pot! I love those one note wonders too, but as a gardener would be unable to resist the temptation of trying more and varied plants, knowing it might not look as pretty. I actually have done that in my own large garden in the ground. It would look so much prettier to have more of one thing rather than one of everything! Hope it's okay to still comment on an older post?
Frances at Fairegarden

I love nice and flowery balconies, but my balcony has very little sun. For most of the day is in shade. To much water is my other problem, because of sun luck water is not drying out. What flowers would you advise me to plant? I really appreciate your help.
Kasia

Lovely sight all the bright colours.
So the salmen and white colored flowers are not geraniums? Or is that a form of? Love them all together like that.
I LOVE GARDEN BLOGS TOO AND THERE ARE SO MANY GREAT ONES OUT THERE.

I just owned a balcony and been thinking abot buying miniture citrus trees, Jasmins, and lots of Vincaroseas. Reconsidering my plans after reading all of thm comments I decided to go for mass plants of one thing and that'd be pink, white, and purple Vincaroseas plus a couple of Orange miniture trees for beautiful fragrance only problem I noticed that my balcony doesn't recieve much sunlight but in the few early morning hours shifting round 10 o'clock. Vnicas would do fine since they grow nicely in partially shaded areas but I don't think I'll ever see blossoms of orange fruits!I like the idea of having miniture trees especially fragrant ones, any suggestions? I went once for Azalias but flowering stopped after dedheading back when I had a deck which recieved same amount of sunlight during the day.