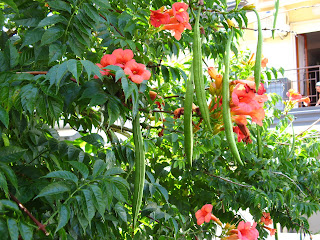 I've always liked the look of the Trumpet Vine (Campsis radicans), also known as Bignonia. I know it can be invasive and can smother everything it gets its tendrils into - the photo below is of one growing up what once was a tree in the pine forest at Eraclea Mare, where we spent our holidays. It doesn't show up very well on the photo, but you can take my word for it that all you can see there is trumpet vine. 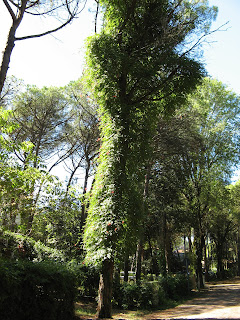 But on a balcony it's much easier to keep things under control. The plants are in containers so the roots can't spread, and the seeds mostly fall on the balcony floor - no real problems with self-seeding. I had been thinking that the plant would look great growing up the trellis at the far end for quite a while, so when I saw the one in the top photo growing at the side of the road, I wondered whether maybe a couple of the temptingly dangling seed pods could make their way into my pockets.
When I got closer though, I backed off - quick. Never have I seen so many wasps on a plant. There were hundreds of them, as well as a good collection of different type of bees. I'd heard that the plant attracted large numbers of insects, but hadn't quite imagined the scale of it.
I've noticed a number of posts on various blogs recently trying to convince us that "wasps are our friends" because they eat aphids, lay their eggs in caterpillars so that the larvae eat them from the inside out, etc.
Lay their eggs in caterpillars so that the larvae eat them from the inside out? Yuk - not what I want to see happening on my balcony every time I look at a plant. I may be obsessed with not killing things, but I wouldn't wish that on my worst enemy. Nor do I fancy having to shoo them out of the house every five minutes. We already get our fair share of huge ones, which I think are part of the sceliphron species (mud dauber wasps). My son calls them "the wasp with the trailer" because of the ridiculously long petiole which joins the two parts of their body. What evolutionary purpose that serves is beyond me. For once I tried to attract them today so I could take a photo, but despite leaving out fruit and jam there's been no sign. huh - I bet if I sat on the balcony to eat a peach ...
So I found this photo made available under Creative Commons license by Nigel Jones (thanks Nigel). It's not the same type - ours has a bright yellow body with black stripes and a straight black brittle-looking petiole. And they're much meaner looking. But you get the general idea. 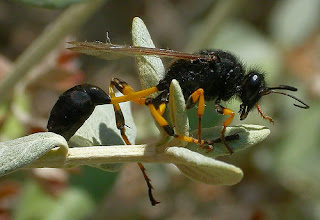 So my trumpet vine plans have sadly been shelved. From now on I'll go on enjoying other people's but will leave having my own until the day I get a very large garden. And it will be going right down the bottom.
Posted by Sue Swift at 3:25 pm

Labels: Eraclea Mare, Off the Balcony

Now I'm afraid! I'm trying to root a cutting of a Trumpet Vine to cover a telephone pole in my garden (I haven't figured out how to make it look attractive yet.) I've seen Trumpet Vine covering telephone poles, but I didn't realize that they were prolific seeders. I'm starting to rethink this whole idea.

I've been thinking of a yellow trumpet vine. They do attract hummingbirds also and that is a plus. Mine would not be near the house so perhaps I can take a chance on the wasp issue.

What a beautiful vine! I can think of one or two places where I wouldn't mind letting it loose. Hmmm -- I wonder if there's enough sun?

On a practical note, I have planted "invasive" species before, hoping against hope, that I'd get instant ground cover only to have my hopes dashed. I suspect that a whole variety of factors affect how enthusiastically a plant spreads in any given area. I guess the true goal is to find the particular set that keep the plant looking great while minimizing its enthusiasm for spreading -- now there's a trivial challenge :)

I too saw a beautiful Trumpet Vine in Horticultural Society here - they had pruned and trained it like an umbrella. t was a beautiful sight, with many flowers dotting the bunch at the top, but when I went closer, I saw that there were many fat, blackish insects feeding on the flowers. The next moment, I took an about turn and marched away. But those flowers were soooo beautiful... [sigh]