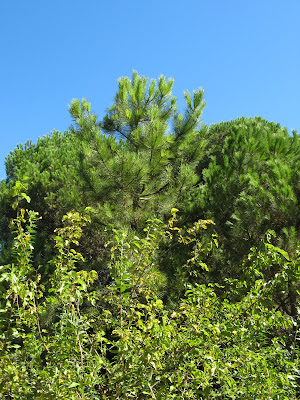 If you've commented on any of the last few posts and have been wondering why the comments hadn't been published - I've been on holiday. The posts were prepared in advance and went up automatically on the scheduled dates, but I've had no computer access for a couple of weeks so couldn't check for comments. They're all up now though. 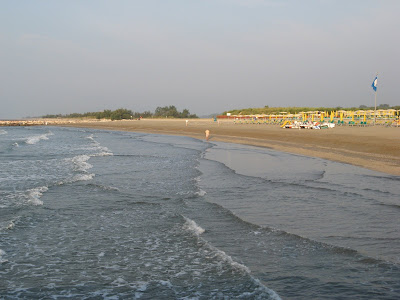 Eraclea Mare, a small seaside village on the north eastern coast of Italy, about 50 km east of Venice. A wide sandy beach gives way to sand dunes and pine forest, then the village which in winter has only 200 inhabitants, but in summer is full of tourists from Italy, Germany, Austria and Russia. The Brits and the French don't seem to have discovered it yet. From then on the land is flat until you get to the Dolomites - the eastern part of the Alps which divide Italy from Austria. They're about 100 km away, but on our last morning, after an incredible thunderstorm and hailstorm during the night, it seemed you could reach out and touch them, the air was so clear. 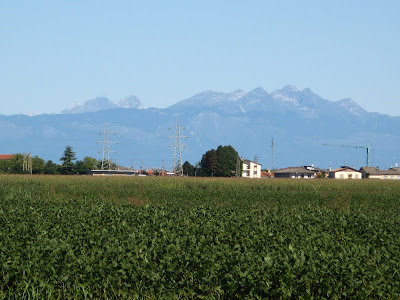 The crop growing in the field above is soya, one of the main agricultural products of the area. I went riding in the country one day and saw that they were experimenting with sowing soya and winter wheat at the same time. The winter wheat grows and is harvested before the soya really starts coming through, but once the wheat is gone it takes over. The advantage is that the field is only ploughed once, instead of twice, meaning less work but also less soil erosion and less air pollution from the tractors. The fields grown like that didn't seem to give nearly as great a yield as the one above, however, so I wonder if the experiment might be dropped. Does anyone know of anywhere else it's been tried? 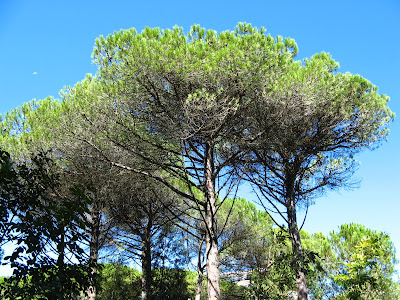 I spent a lot of time walking and biking in the pine woods. I can't claim they were deserted, as they were constantly crossed by people going or coming back from the beach. But I managed to find some quiet shady paths. 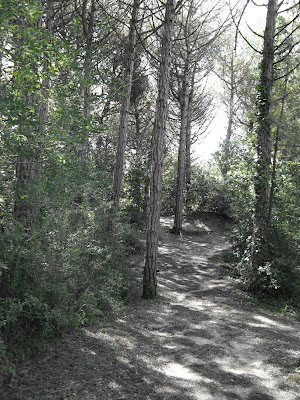 The pines were Umbrella Pines (

Pinus pinea) which are typical of Mediterranean regions. I was on the look out for wildlife, but there was disappointingly little. The most common birds were ring necked doves, which cooed and squawked in the trees around our hotel.

And there were also a far larger number of jays than I've ever seen in one place before. They were exceptionally tame, and would hop around on the ground in front of you, only flying away at the last minute - except of course on the day I went out with my camera to photograph them. 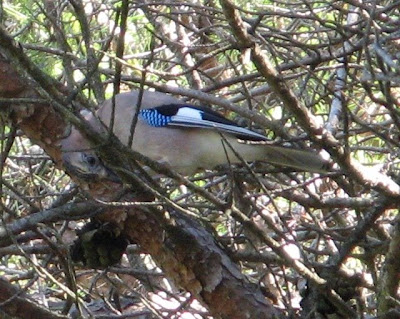 The only animal I saw was a red squirrel (Sciurus vulgaris) who was also a bit camera shy. I noticed him in roughly the same place on several occasions, but again, when I went out with my camera he refused to co-operate. 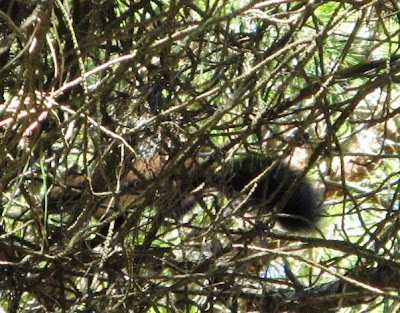 Red squirrels are still holding their own in many parts of Italy, though in some areas the greys are fast wiping them out. Despite their name, their coat colour can vary, including a variety found in the south of Italy (sciurus vulgaris meridionale) which is completely black. This one had a dark brown coat and the characteristic white belly.
Although I've been in the area many times before (my husband was born nearby and likes to go back to see relatives and old haunts), it was the first time we'd been to Eraclea Mare. I chose it because it seemed less developed and "touristy" than other places along the coast, and we were well rewarded. It was a super holiday and I know we shall go back. If you're in the area, I recommend it.

For information on the danger posed to the red squirrel population by the greys : The European Squirrel Initiative

What an interesting idea to grow the two crops together! Even if the yield is less than normal you have two crops in one space...maybe allowing for a loss of productivity in each crop?

its a shame the reds aer being affected by the greys even in Italy!

Sue, You're so fortunate to be living in Italy! We've been there six times. You have a great blog. Thanks so much for your messages on Blotanical.
Cameron (Defining Your Home Garden in Chapel Hill, North Carolina USA)