Ten reasons why I wouldn't be without my scissors 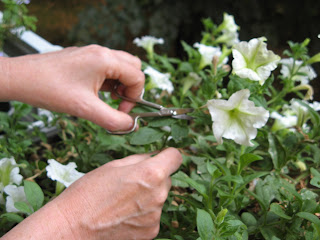 What tools are absolutely essential for gardening on a balcony? Well really, none. But I wouldn't want to be without my scissors.

Balcony gardening is light on tools and equipment. You need some containers, obviously, and a good watering can. But forget the spades, forks, rakes and hoes that you need in an ordinary garden. Not to mention lawnmowers, hedge clippers and all the rest. When you're balcony gardening, almost everything can be done with your hands.

My own tool bag consists of two trowels and a small fork which haven't seen the light of day for months, a dibber which I occasionally use for planting bulbs and seedlings, and a pair of secateurs which don't work and which I suppose I'll get round to replacing someday. But there's no rush. On a balcony even shrubs tend to be kept small, so that the scissors often do the job of pruning just as well. Gardening gloves aren't necessary, but I do sometimes put on rubber gloves - the thin type that doctors wear - if I'm handling plants that irritate the skin (alyssum brings me out in blotches for instance) or if I've got a cut on my hand and don't quite feel like plunging it into stable manure.

But I do use my scissors a lot. I have two pairs - one large and one small, nail-scissor type. I use them for all the jobs I don't want to use my hands for, or which would otherwise have me tearing at things with my teeth. They're invaluable for ..

So there you have it. Nine reasons why I wouldn't be without my scissors. I know, I know - the title said ten. But I've run out. Have I forgotten anything? Can anyone else suggest the tenth?

This post was part of a group writing project suggested by Darren Rowse of Problogger - a site well worth visiting for ideas on blogging.

Hubby found me a pair of Fiskars "loop handle anvil pruners" on sale for $4.99 -- blades about 3/4" long, and I've used them a lot, mostly for deadheading. I smiled when I read your last paragraph -- I've been tempted to chew through a geranium stem or two! They're tough!

Loved your title, it piqued my curiosity. Here from ProBlogger myself :).

Good point on the internal seed packet. I tried ripping one of those open with my teeth of all things. Dumb move! Half of the packet scattered all over the floor. :-P

Hello Sue, enjoyed your blog very much. It has a nice blend of topics, all very interesting. I'll be back when I have more time.

I came over from ProBlogger. Wow, you're serious about the scissor thing. Great. I'll have to consider carrying a set from now on.

I love number 9...I imagine in your close quarters that could be a problem and no one (no gardener) would blame you for flashing those scissors threateningly!

Join the club, or should I sau I join your club? :D. My old horrible looking scissors (beauty lies in the eyes of the beholder though) serves me too, but I did purchase a new secateur yesterday and I love using it, so my poor little scissors feels unattended. lol.

Even though I have a yard, I consider my scissors invaluable as well:) They are wallpaper cutting scissors that I never used for a project...they are really long, and work for almost anything! Jan

Yes... scissors always be with us while we are gardening. Small tool but big function.