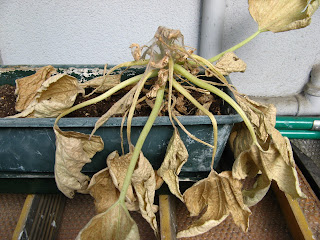 I left them for three days. Just three days. They'd not been doing well. Every time I lifted the leaves hordes of whiteflies would swarm around. They're not a pest that I've ever had before, but then I've never tried growing vegetables either. I didn't want to spray things that I was going to be eating, and found out too late that planting marigolds or nasturtiums with the plants would have helped. But they were bearing up, and I hoped that they might last long enough to give me at least a few courgettes.

And then for three days I couldn't get to my office, where I have my vegetable balcony. The containers are tucked out of sight of the clients. From the office window all you see is some pretty flowers trailing over the balcony railings. but stick your head around the French doors and there they are. Or were.

Just three days. And they hit. Maybe they'd been there before and I'd not noticed, but I went away leaving two relatively healthy looking plants and came back to this. 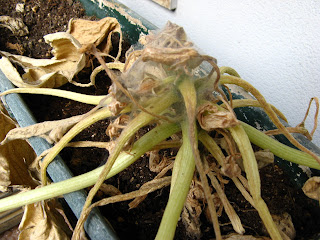 No, it wasn't just the whitefly, though they clearly weakened the plant. The webbing gives it away.

OK, OK we all know I'm obsessed by them. But looking at this, do you really think I'm exaggerating?

How completely depressing - I really dont know what to say.

How upsetting. I hope the little pests left something alive!

That stinks. So sorry

no, you're not exaggerating! that's really depressive...
concerning the white flies; for a quick fix, try putting a few sliced cloves of garlic on the soil, next to the stem... i find that they fly as fast as they can, away,away, when i do that :-)
hm, hope there's other edibles to please you in your secret office garden.

Wow, I had no idea the stupid little critters could do that much damage that quickly. That is totally disheartening.

Not at all! It'd have such a shock to see them like that. Wish plants had mouths at least to cry so that we knew they're being hurt... :(

Oh dear! I would have to agree that was probably more than just white flies there.

What veggie were you growing?

Here is a recipe that is safe for veggies, and it works wonders for a lot of different non-beneficial insect critters from sticking around plants.

I keep this mixture and a bottle and add

1.5 teaspoons for every 1 cup of water to a spray bottle.

That is not good! Sad little babies.
Jen