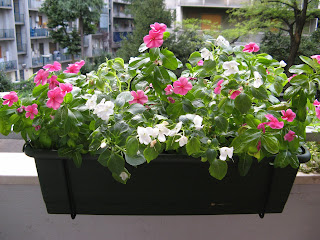 Visit the balcony in the late summer and you'll always find a number of Rosy Periwinkles blooming away. They're invaluable. When other plants start succumbing to pests or diseases and dying off, leaving ugly gaps in the containers, I pop in a periwinkle. I nearly always have a few of the white varieties on hand for emergencies - that way they can go into any pot, regardless of the colour scheme without looking too out of place. Totally resistant to pests and diseases themselves, it doesn't matter if there are still spores or eggs left over in the soil - they won't be affected.
This year though I decided they deserved to be included in their own right, and I planted a container on my office balcony, just outside the window, using a pink variety mixed in with some white Impatiens. I'm not a great pink lover, and I'm still not sure if I like it. It's pretty - but too pretty somehow. Chocolate boxey. 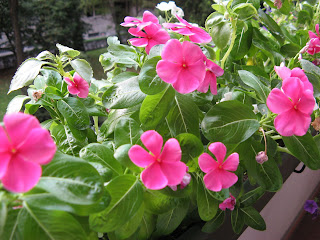 The combination has been great in terms of flowering though. They've been blooming non-stop since I put them in. The Impatiens was a risk - I've never had much luck with it before. But it's been fine. Perhaps because this summer has been cooler than usual, or perhaps because the office balcony is in a slightly different position to the balconies at the flat.
Rosy periwinkle is native to Madagascar. It used to be called Vinca rosea, but the name has now been changed to Catharanthus roseus. It's a sun lover, but can also cope with semi-shade. It won't survive the winter though, dying off when temperatures drop below about 5°C. I've tried bringing it indoors, but have never had much luck. 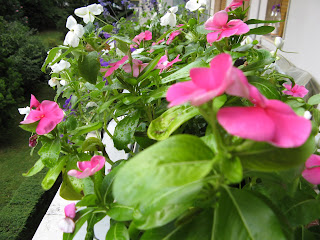 I've also never had much success starting them off from seed. The seeds need temperatures of at least 22°C and a period of total darkness to germinate. I did once try starting them off under the bed, which worked, but there's still the problem that the seedlings take a long time to reach the flowering stage. If you want to grow them as annuals you really need a heated greenhouse, or the summer is over before you see any results. They can also be propagated from cuttings, though I've never tried. A project for next year maybe.
They have no particularly fussy habits, and will grow in a variety of soils and under various conditions. I use all-purpose compost, water generously and feed about once a week with a liquid fertiliser. They seem to do fine.

I'm always amazed when I visit your blog how much you manage to grow on your balcony. These flowers look lovely

My favourite boxes are chocolate boxes! Seriously, the pink is very pretty.

We still call them vinca here...I had to look it up having never heard the Rosy periwinkle name. They do well here too blooming happily until frost.

Yipee! Sue's back with yet another blog! [jump jump] ... [jump jump] I always wait for your next blog entry. Your photos and flowers are so beautiful that makes me want to come here everyday.