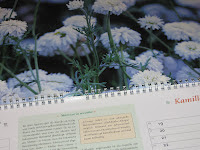 This month's calendar is a bit confusing. It's supposed to feature matricaria recutita, or camomile. Well that's what the heading says, but the picture is quite different and the text describes a variety of plants, presumably all of the same family. There is a small picture inserted in the text, and that does have the typical daisy like flowers of camomile. However, the big picture is chamaemelum nobile, and, after a bit of detective work on Google, I think I've identified it as chamaemelum nobile 'ligulosum' - although on another site, the same plant seems to have a yellow centre. The yellow centred variety is similar to what I grew as matricaria nana last year (see the picture below). In any case, it's quite unlike what I would normally think of as camomile, and according to the text, more likely to cause allergies. 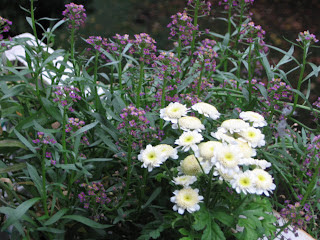 So - sticking to traditional camomile, what's it good for? Camomile has been used medicinally since the time of the ancient Egyptians, who - because of its bright yellow centre - associated it with the sun god Ra and considered it to be sacred. It's also mentioned by Hippocrates, Galen and Pliny the Elder. The most important active ingredient, found in the flower heads, is the essential oil chamazulene. Camomile tea is well known as an "unwinder", useful as a pre-bedtime drink to help you sleep. This extract is from a poem by Katherine Mansfield called Camomile Tea :

How little I thought, a year ago,
In the horrible cottage upon the Lee
That he and I should be sitting so
And sipping a cup of camomile tea.

Here in Italy, it's frequently given to children just before they're put to bed. It's also used widely to lighten fair hair - even in commercially produced shampoos and hair treatments. The calendar suggests using it for a variety of other things including stomach problems. 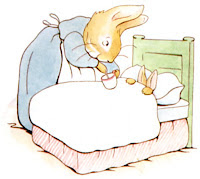 And if you remember Beatrice Potter's The Tale of Peter Rabbit, when Peter had stomach ache after gorging himself on the lettuces in Mr McGregor's garden, his mother gave him "a teaspoonful of camomile tea", and put him to bed.

The name matiricaria apparently derives from the Latin for womb, and was given to the plant because of its widespread use in treating women's gynacological complaints, in particular menstrual cramps. This is also the basis of its common German name Mutterkraut - mother's herb.

But that's not all. The calendar says it's also useful for a load of things that I can't find a translation for, while on the web it's suggested for everything from arthritis to healing wounds. And according to one site it's a carminative, cholagogue, diaphoretic, and emmenagogue. Well, now you know. And I thought I was having problems with the German ...

But according to some research carried out in Britain and reported by the BBC, there's sound scientific evidence for many of the traditional uses. Five cups a days for a fortnight will apparently also ward off cold symptoms (should you ever have a cold that lasts a fortnight, that is).

Even if, like me, you loathe camomile tea, it seems that matricaria recutuita is well worth growing in the garden. It is said to keep neighbouring plants free of pests and diseases, and to have a curative effect on sick plants around it. It's especially useful if grown in the company of other herbs containing essential oils - basil, marjoram, thyme and so on.

It can also be used to make a lawn, as an alternative to grass, which lets out a characteristic fragrance when walked upon or cut. In Mary Wesley's novel, The Camomile Lawn, the lawn becomes a symbol of tradition, permanence, and the youth and innocence of the characters as they meet on holiday in Cornwall, all of which is lost they meet again after the Second World War.

Matricaria recutita is best sown in the autumn or spring, in light sandy soil. It's a sun lover, which needs little fertilisation. And even if you don't want to drink the tea, it's worth collecting the flowers as you can spray it on new seedlings as a fungicide to prevent damping off.

Another good reason for collecting the flower heads is that, if you don't, it will self-seed and before long you'll find it everywhere. As Shakespeare said in Henry IV Part One :

For though the camomile, the more it is trodden on the faster it grows,

Yet youth, the more it is wasted, the sooner it wears.

Yes, there's a reason you can make lawns from chamomile. It's incredibly hearty and invasive! I naively planted some about five years ago and am still tearing it out of the beds. That said though, it's a lovely plant with a nice fragrance. I wouldn't mind having a lawn of the stuff if I could trust it to stay away from my flower beds.