This is probably the latest Gardener's Bloom Day post ever. It's only just made it into the right month. But I've just been busy. So here's what's been blooming on the balcony since the 15th. 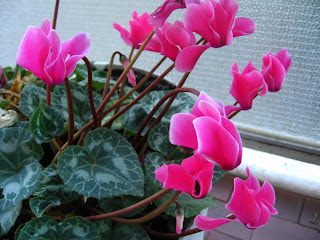 Cyclamen probably aren't much of a surprise, and nor will these little pansies be. Babies of course, but they're already putting out their fair share of blooms. 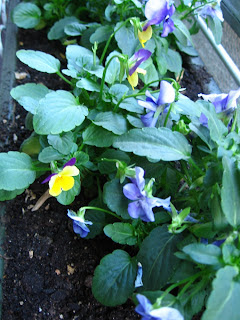 The rest is slightly less believable, but I promise they've all been taken over the last week - just look at the trees behind and the leaves on the ground. First the pelargoniums. All but one have come back into bloom with a vengeance, and the salmon pink plant has now been blooming for over eighteen months without a break. 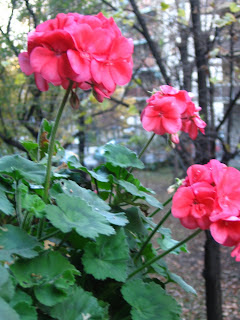 Campanula. these have recovered from some slight ill-treatment in the early autumn - they got shoved behind something, and I forgot about watering. They lost all their flowers but are now doing well again. 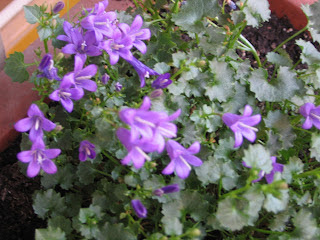 Alyssum. I sometimes curse my alyssum because it takes over the containers. But it's worth it to have it still going at this time of year. 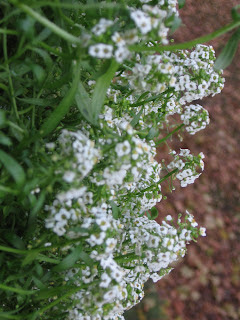 And now - the pièce de résistance - marigolds. In December, give or take about five hours. They'd stopped blooming and I was about to throw them away when I saw they were covered in buds. And since the middle of the month more and more have been coming out. 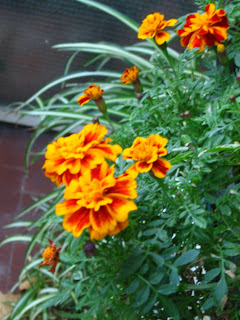 Needless to say we've had an unusually mild November - but that can be the topic of the next post.

Hey, it was still November when you posted. It would be nice to have those flowers blooming now, though it my garden it would also be a bit freakish.

Thanks for joining in!

Your blooms look so pretty. It is better late than never to post.

I read your comment on Carols blog about the chaos on your balcony. Have you read Miriam Osler's book _A Gentle Plea for Chaos_? Although she gardened on acres it is still her philosophy that I love. Chaos is ok. Maybe because my garden is what I like to call controlled chaos. :) Happy GBD.

The same thing happened with some marigolds in my new allotment garden near Amsterdam. They were left behind by the previous owner, I was about to dig them up because I thought they were finished for the year, but then they started blooming. I was there a few days ago, and they were still blooming. We´ve already had a few light frosts.