Weird weather we've been having... 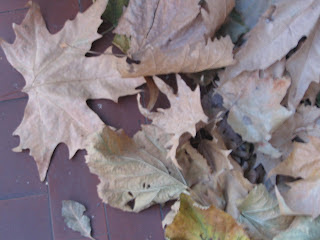 As I said in my last post, marigolds blooming in December is a sure sign that the weather must be mild, though it's hard to be sure as I can't find a complete list of temperatures for this month so that I can compare them with official averages. It's not been all warm weather though - there was one day when it plunged about ten degrees overnight - just the sort of drop that plants don't like. And we also had three days of torrential rain - not unusual for Milan in November. It never drizzles here. We go for months without a drop, and then when it does come it just pours and pours, so that roads flood, cellars flood and occasionally so does the underground, causing chaos everywhere.

But the strangest event this month was towards the middle of the month when the foehn suddenly hit. The foehn is a warm wind that comes across the mountains - warm because as the air drops down the side of the mountain, the increasing atmospheric pressure heats it up. It produces gusts of wind than can get quite strong. this time it got up to around 90km per hour in some places, and was about 80 when it hit Milan.


It had been fine when I went to work in the morning - but when I came out at lunchtime I had to fight my way through it to get home to my son, who was home from school sick that day. The wind had blown away all the smog, so there was a bright blue sky, warm sunshine and in the background you could see the Alps - something which only happens when it's windy enough to clear the pollution. The strongest of the winds happened just after I got home. The trees in the garden had just reached the peak of their autumn colours, so of course the leaves were ready to come off, and there was what would have been a wonderful photo of trees bent double and the air full of a stream of leaves blowing from left to right across the garden. Needless to say, the batteries in my camera were dead.


When I next went out on the balcony it was ankle deep in leaves, and I'm still finding them tucked behind the occasional pot.


Will the warm weather go on? The forecasts say no and that we're not going to have a mild winter again like last year. We'll see. The temperature has dropped, but it was still nine degrees out there this morning. If we do get normal temperatures, I should need to cover everything with fleece in about ten days. last year I didn't really need to at all, and although I did cover things as a precaution while I was away for Christmas, the fleece came off pretty soon afterwards. This year who knows. We shall see.
Posted by Sue Swift at 5:07 pm

Strange weather all around. We had the mildest fall and latest first frost that I can recall in my 30+ years of gardening in Iowa.

Interesting wind...somewhat like the Santa Ana in Southern California. If you are interested I've tagged you with the Eight Things I'm Happy About meme that came to me from Garden Wise Guy.

Yes, I've justy checked on Wikipedia and in fact the Foehn and Santa Ana winds are the same phenomenon. In fact the wind has lots of regional names - the Chinook in the Rockies and Alaska, the Helm wind in some parts of Britain, Zonda winds in Argentina, and lots more.