Review of the Year 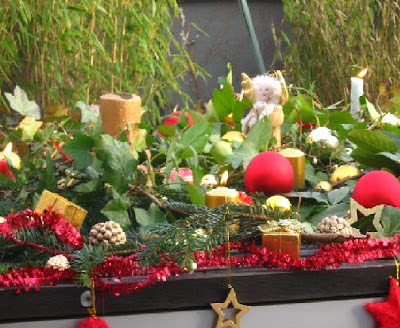 As it´s the end of the year, I thought a look back at what 2007 brought might be timely. So here goes ...
January : We started the year in Germany, with an ice storm, but apart from that it was a fairly quiet month, the highlight being reading what was probably the best book I came across in 2007 - Curious Incidents in the Garden at Nighttime.
February : February brought us the coldest weather of an exceptionally mild winter. For the first time the temperature dropped below zero, and it was time to cover up all the plants - something I usually need to do in early December.
March : The cold weather didn´t last long though, and in March spring was back. The plum tree outside the balcony was in full bloom, and I saw both the first butterfly and the first caterpillar - little did I know at the time what a plague they would be this year, and that I´d be finding them right up to December.
April : April started with a visit to the annual Easter Monday flower market in Milan. By now, all my spring flowers were in full bloom, and on the 15th I joined in for the first time to Gardener´s Bloom Day.

May : Only three posts in May - we had visitors and it was a busy time. I continued with my monthly posts on the calendar I´d been given for Christmas, which focused each month on a different plant and its medicinal uses. This month´s plant was calendula - recommended for the treatment of skin complaints.
June : By June the caterpillar plague was really under way and I was losing plants right left and centre. As I don´t like killing anything, I was picking them off several times a day and trying to persuade them to stay in my caterpillarium - but they still kept coming.
July : July started with a weekend in Liguria, where the climate - and thus the vegetation - is quite different from here. I also started posting regularly again after being ill for a while. Unfortunately it wasn´t only the blog that had been neglected but also the balcony, with predictable results. I also posted about this year´s failures - so numerous it ended up as a two-part post. I suspect late planting was the reason for the pitiful growth and lack of flowers on plants like my hollyhocks but it didn´t explain the lack of flowers on the mandevilla, which grew happily all year but failed to produce a single bloom.
August : In August I was back at my house in london - and spent nearly the whole of the month clearing the garden and fighting against the borage which had completely taken over. By the time I left it was looking tidy, if a bit bare. I planted as much as I could at that time of year - who knows if it´s come up?
September : Most of my September posts were still about the garden, as I had no internet access while I was away. Although I think I manage to grow quite a lot on the balcony, a garden certainly provides more to write about. As well as the plants, there are also the birds and other wildlife that visit. Back on the balcony, the only wildlife I was meeting were the caterpillars, which were again wreaking havoc and destruction.

October : October brought the first autumn flowers, though as it was still warm the summer flowers kept goin too. I also posted for the first time on my Crassula Ovalis - whose name at the time I didn´t know - and which I shall post about again in the next week or so.
November : November started with th the four days of the Garden Blogger´s Carnival - which linked to posts from other blogs. Day One focused on the theme of wildlife in the garden, Day Two on vegetable gardening, Day Three on winter gardening, while Day Four was - well a bit of a hotchpotch. Thanks again to everyone who took part. There´ll be news of a new carnival posted in early January - this time with a difference.

December : And that brings us almost up to date. December saw a visit to the annual Craft Fair in Milan to buy bulbs, where amonst the daffodils and tulips I also found the "Monster from the Deep", Eremurus. Then thoughts turned to Christmas with the Christmas Quiz, and a few days ago, as well as celebrating Christmas itself, we celebrated the 100th post on the Balcony Garden.
And that´s the review of the year. If you´d like to do one of your own, just leave a comment once you´ve posted, so that we know where to find you. And in the meantime ...
Have a Very Happy New Year!
Posted by Sue Swift at 1:53 pm

Happy New Year! Sounds like 2007 was a busy 1 for you. I didn't do a year in review as I've been blogging only since August. Instead I did a post on the best performers of the year and a post on the underachievers of the year. I do enjoy reading these year-in-review posts.