Monster from the deep... 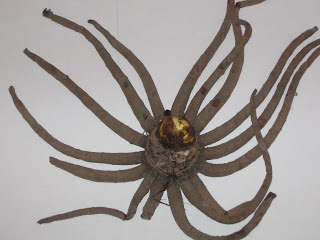 Every year, for the first ten days or so of December there's a huge craft fair in Milan, with exhibitors from all over the world. And I mean huge - it already fills nine exhibition halls and this year they had to turn down so many applications that next year it's moving to the new Trade Fair Centre that's recently been built on the outskirts of the city. It's a great place for Christmas presents, and if you ever need to come to Milan, it's worth trying to coincide. But apart from the general fun of shopping, I go there every year for one stand - a Dutch bulb stand. 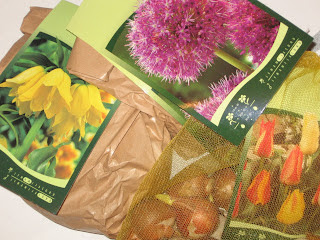 Yes, I know it might seem a bit late for bulbs, with half the blogs you click on reporting snow by now. But here, though were not exactly in T-shirts, the really cold weather hasn't usually hit by December, and I can get away with it as long as I get everything in immediately - as my daffodils from last year show. This year I got some dwarf tulips, alium and fritillaria imperialis. And the monster in the top photo.
In case you don't recognise it, it's Eremurus or foxtail lily. When I saw it I had no idea what it was but couldn't resist asking about it. And once I did, I was hooked. Tall pink flower spikes from April to August, loves sun but needs cold winters. Should be just right for the balcony. Apparently though it doesn't like being moved, so I shall have to decide on a permanent container from the beginning - and then just try and plant other things around it. I seem to have a mental block on the name though, and keep having to go and look it up. So as far as I'm concerned, from now on it's just the Octopus Plant.

As for the others, I've never been particularly keen on tulips and this is really the first time I've tried. With limited space available, some things have to go - and I usually prefer daffodils. But my son talked me into these, and I must admit I was quite attracted. The fritillaria I've been wanting for a while, and the allium I tried a couple of years ago but managed to drown. Note to myself, water sparingly this time.

If you knock a leg off does it regrow!?

I still have bulbs in my garage that I bought recently, with the early snow and lots of rain inn the forecast I'm not sure if they will get planted.

Don't know about legs regrowing, but when I picked it up to take the photo it squirted ink at me ...

Hi Robin - in fact i didn't get round to planting on Sunday and it's suddenly turned very cold. Must do so in the next few days.

The Eremurus is an awesome plant and I've been looking locally for one for a while. Same for the F. imperialis.

I bought some Eremurus earlier this year at a garden show, planted them, they put up some foliage and then died. Are they supposed to go summer dormant??

When I dug up my Kniphofias earlier this year and moved them, they looked much like the Eremurus. Octopus-like and boy were they tenacious! I thought I'd never get them out of the ground! Then I worried they wouldn't like the move, but they did just fine.

You may have planted too late for flowering - from what I understand they should really be planted late summer, and will then flower the following year from about April/May onwards. See what happens next year!

Yes, I'm hoping to get something this next year. :-) But do they go dormant during the summer? I meant to look it up but totally forgot - other plants vied for my attention. LOL.

Kylee - Yes. According to various sources on the net, from late summer to early spring.