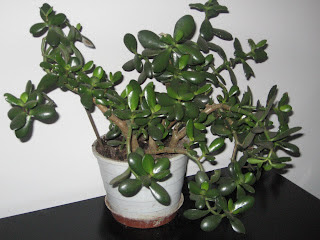 I posted last year about my Crassula Ovata, although at the time I didn't know what it was called. I asked if anyone could identify it for me, and Muppet very kindly did, though by an alternative name Crassula Argentea. I then checked on the net and found that it was supposed to flower at Christmas. Would mine? It hadn't last year, and the net was full of people saying that theirs never had. I found out they would only flower if they had natural conditions of reduced daylight hours - well, mine had been inside all last winter, under artificial lighting. Maybe that was the answer. I decided to risk the cold and leave it outside, though sheltered this year. And the result is in the top photo. Not a whisper of a flower.
So imagine my surprise when I got to Germany for Christmas and found two large specimens in full flower growing in the entrance hall to my sister-in-law's apartment. What, I wondered, was the secret? So when I got back I set about some more research and came up with the site of The Liverpool Branch of the British Cactus and Succulent Society. It's not definitive, just an enthusiast (Jim Mercer) writing about his own experience. But I like it for that. 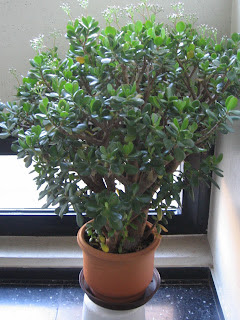 According to Mr Mercer, various conditions have to be fulfilled if the plants are to flower. Apart from the light conditions mentioned before, he suggests that the plants must be about four years old and a foot tall. Mine is just about that, perhaps a bit less. If that's all though, next year there should definitely be flowers.
He also warns against pruning too late in the year as the flowers form at the end of branches. I didn't prune at all this year, so it's not that, but I shall have to sooner or later. Otherwise they can reach 7ft tall! He suggests June as being the optimum time.
Then there's feeding and watering. C. ovata are dormant in summer, but Mr Mercer advises watering and feeding (reduced strength) weekly. Oddly he doesn't talk about feeding in winter when they're active, but in any case I didn't feed at all this summer. Next summer I'll try it. 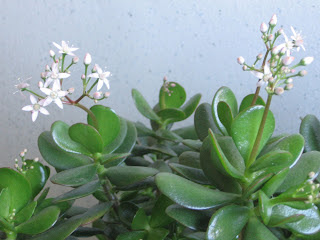 I suspect the real reason I'm not getting flowers though, is temperature. Mercer recommends greenhouse conditions in winter, with a night-time minimum of 5°C. And in fact, those in my sister-in-law's apartment block must have just about the same conditions. No way I can do that inside the flat, so next year maybe I should try mine in our hallway too. I can see that I'm going to have to spend 2008 being extremely nice to the neighbours ...
Posted by Sue Swift at 8:53 am

I have one that's over 20 years old and it has bloomed maybe twice, but not in the winter. I move it outdoors in the spring and if we have very warm weather, especially warm nights, then it blooms.

Hi Sue! First of all a very Happy New year to you! And thanks for inviting me to garden bloggers retro carnival. Its an interesting concept and I'll soon provide my favourite blogpost link.
Best Wishes

I have these and it gives a bunch of red flowers all year round. i have planted it in pots and have kept it on my terrace in partial shade and i havent fertilized it ever.
i got a number of plants from a single one. all i did was break off the stem and put it in another pot.
it looks really pretty specially in hanging pots.
the reason i am getting so many flowers all year round maybe because i live in a warm climate (i live in Pakistan)... so i would advise you to giv it lots of light and heat..

I had one 20 years old and bloomed three times, I lost it during a vacation trip when it got too cold at home and the plant die. Well I have a question, I got another one from my brother in law, the plant was small when I got it, so it looked like a regular Jade plant, I replanted in a new pot with new dirt and I took it to my office, I placed it close to the window, the plant loved it! it start growing like is not tomorrow. then it stop behaving like a jade plant, and started behaving like an Ivy the branches are every where and climbing everywhere, I thought it was not getting enough sun, but one of it neighbors is a snake plant and this one is great. One of my friend think this plant is an hybrid. I have no idea why is behaving like that. Any suggestions? greenboy

I want to ask Mr.Mazhar, where did you get "Crassula Ovata"(Jade plant?
I live in Pakistan (Karachi), but I still cant find this plant and I really need it.

If anybody can help me to find
"Crassula Ovata" in Pakistan (Karachi),plz let me know the address with contact number....!