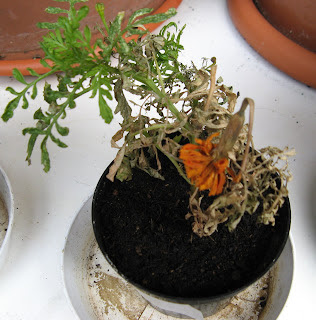 Bill is no more. He has copped it, kicked the flowerpot. He is, as Monthy Python would have it, an ex-marigold.
Those of you who were following the saga of Bill and Ben the Flowerpot Men will know that the deceased was one of the plants taking part in my Crocks or no crocks? experiment. Which of two plants would do best, one in a pot with and the other without drainage material, all other things being equal?
Well, for about five weeks both of them were doing fine, though Ben (no crocks) definitely had the edge. June was cold and rainy, but they seemed to like it and were both increasing in size and blooming. And then July arrived and almost overnight we went from average temperatures of 16°C (61°F)to 35 (95).
We all just flaked - people and plants alike. Only the whitefly and the red spider mite could be heard yelling Yippee! and they moved in with a vengeance. I've spent the last ten days pulling off dying leaves, misting and spraying, but with mixed success. 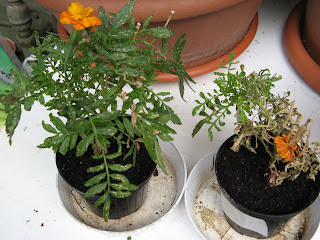 And the other day I went out to find that both Bill and Ben were affected, and that Bill was succumbing fast. I treated them both, but for poor old Bill it was too late. He went downhill rapidly, and there was nothing I could do but try and keep him comfortable in his last days. Ben is also a bit the worse for wear, but seems to be fighting back valiantly.
So there we have it. No crocks seems to have won. Though Bill started out very slightly larger than Ben and with one bloom on the way, Ben soon took over on all counts : he grew more rapidly, gave more blooms, seemed more resistant to pests, and recovered better from their attacks.
Statistically completely non-significant of course, and who knows if the same would be true with a different shaped or sized pot which drained less easily. But good enough evidence that I will no longer panic when I'm potting up and find I've run out of drainage material.

Oh poor Bill and Ben - though with your constant travails with red spider mite et al. perhaps it was inevitable?

BTW I've tagged you over at my place - I do hope you'd like to play...

As an aside, I've read in two different articles off-hand comments by "gardening professionals" poo-pooing putting crocks or other similar items in pots. Your experiment seems to confirm their advice.

I really wish that I'd read this before I put my new tomatoes out in pots this week...dang.

Following your lead, I've been experimenting too, mixing a bit of vermiculite with the compost. So far so good, no deaths yet although everything wilting in the heat, including me.

Am still waiting for the natural products to combat red spider mite, aphids and geranium moth and will keep you informed.

Hope life is less frenetic for you.