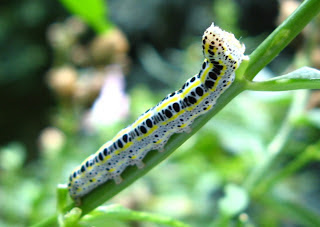 The boys are back. And I was wondering where they'd got to. Whereas by this time of year the caterpillarium is usually fully inhabited, this year I've not even had to think about it. Until last week that is.
Apart from the dreaded geranium bronze butterfly (cacyreus marshalli) we only really get two types of caterpillar on the balcony, which I suspect are cabbage white larvae. One is the one in the photo above. What is it? The colours are right for the large cabbage white, but it lacks the bristles that all the photos on the net seem to show. We do have a lot of white butterflies around, definitely of the Pieridae family, but the marking isn't quite that of the ones that I've seen illustrated. The other type of caterpillar is green with yellow markings, but doesn't seem to have been around this year at all. Again, it would appear to be very similar to the small Cabbage White, but without the bristles.
Butterflies do, however, exhibit regional variations so I suspect my identifications are correct and its just that Italian caterpillars are clean shaven. Italian men don't go much for beards either, so its obviously a cultural factor. 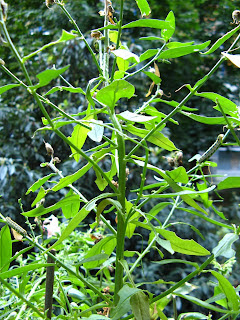 Anyway, I found the lad in the first photo, plus seven of his brothers and sisters, happily chomping away at an antirrhinum plant. Six are visible in the photo above - can you spot them? In comparison with last year's invasion, when they just about decimated the balcony, this lot are no problem. The plant had finished flowering and I can afford to lose it, so I've left them where they are.

The Geranium Bronze butterfly caterpillar is another matter however. These are definitely not clean shaven but short, squat and bristly. And a sort of odd lozenge shape. But by the time you see them it's too late. The young larva starts life by burrowing into the stems and eating the plant from the inside - see the tell-tale hole? By the time it emerges as a full grown caterpillar the damage is done. The whole stem has been destroyed. 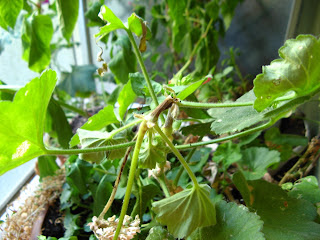 They're native to South Africa but arrived in Europe twenty years ago and are now widespread over southern Europe, while northern Europe is trying desperately to keep them out. The colder climates in the north may help to stop them spreading, but here they're a plague. I haven't got a plant that's not affected this year. There was an article in the paper the other day saying that geranium sales are down dramatically this year. The article was trying to put it down to the economic recession, but rather contradicted itself by saying that petunias and other annuals are holding their own. I wonder if it isn't just that people are changing away from geraniums because they just get too damaged and tatty. The butterflies are pretty little things, but give me the cabbage whites any day. 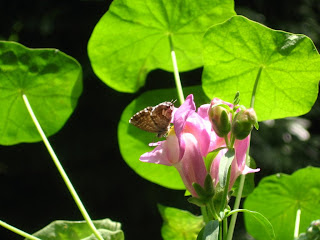 Cacyreus Marshalli, from the UK Department for the Environment, Food, and Rural Affairs

It's really not right that something so beautiful is so destructive!

hey there -
i keep returning to your blog - enjoy the pictures, your words and then i'm a balcony gardener myself ;-) wanted to ask you whether you're ok with me linking to your blog?

Nice photos... Recently fumbled into your blog and I feel lucky. You've got a beautiful balcony - with beautiful caterpillars :D I enjoy reading your blog and staring at your garden's photos like a child wide-eyeing the melting ice-cream!

Hi Kompostella and Chandramoulis - welcome to the Balcony Garden and thanks for the comments. Kompostella - I'd love you to link here, thank you. Chandramoulis - don't know about the kids round your way, but here they eat the icecream far too quickly to risk it melting :)

What cool looking caterpillar. I wish I had more bug diversity in my garden.

Hi Sue, Luv your observation! Caterpillars must keep you in good company in your balcony; you know a hell lot about them.
That was an interesting analogy between clean shaven Italian Men and Caterpillars, but unlike the Men, Caterpillar is looking a bit odd without its bristly 'Beard'.