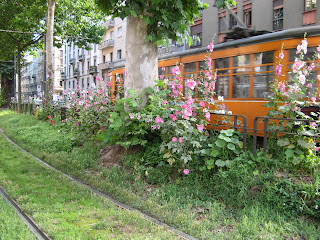 My favourite example of guerrilla gardening in Milan is along the tram lines just outside the centre of town. In Milan the trams mostly run along the roads -or rather don't, because the Milanese habit of double parking on bends usually means that at a certain point the trams find they can't pass. And if one tram gets stuck, the one behind does too. And the one behind that, and .... So you not infrequently find a little row of ten or so trams patiently waiting for the tow-away truck to turn up and remove the car whose bright spark of an owner decided to park it too close to the tram lines.

However, in the few instances where the roads are wide enough, the trams have their own lane down the middle of the road, with the tracks going in each direction usually divided by some scrubby, weedy grass and the odd tree. 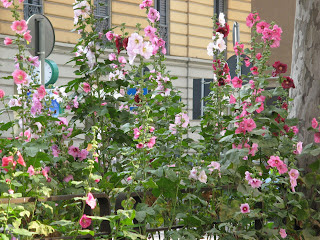 And a few years ago, in one of these areas, some hollyhocks suddenly sprang up. There's no way they could have got there by chance - someone must have planted them intentionally. And every year since, they've multiplied, so that they now spread about 50 yards along the tram lines. Have they just self-seeded or does that same guerrilla gardener go back each year to collect the seeds and plant them again a bit further along? I suspect so, and if s/he goes on, in a few years they'll be stupendous. At that point the tramlines run for about a kilometer before they hit the road again, and a line of hollyhocks extending all the way along would be glorious. 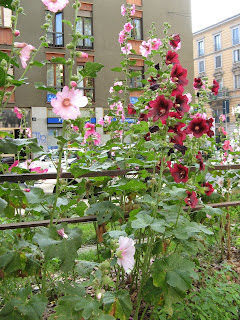 My own hollyhocks on the balcony have done quite well this year, but the colours have been disappointing. They were supposed to be mixed, but the majority came up white, with just a couple of pinky ones and one beautiful deep red variety. The white ones would have been nice if they'd been mixed in with brighter colours, but whole containers of white were a bit boring. Nice for scanner photos though. 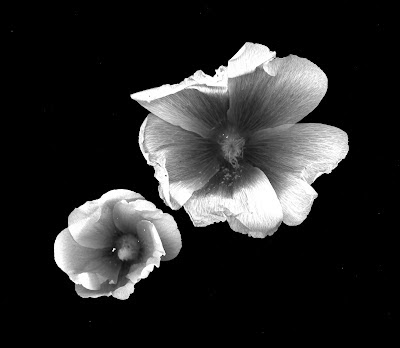 So despite my intention to grow them as perennials, I think I'll take most of them out at the end of the year and start again. They're full of seed heads though, and it would be a pity to waste them. Maybe I'll take a walk along the tram lines ....

I like this gorilla malarky in Milaan very much. Those hollyhocks are stunning and just imagine one whole kilometre of it. Mindboggling! Better luck next year with more colourfull Hollyhocks on your balcony.

The hollyhocks must add so much to that stretch of tram line. I hope they continue to spread. It doesn't take much to make a huge difference, does it?

Ohhhhh, I love hollyhocks! I would be tempted to take a ride just to see them. I hope they do creep all up and down the line.

What a wonderful splash of color someone contributed to the city.

(Your contribution to the Dueling Bloggers dispute did not go unnoticed. But I can be magnanimous.)

Nice post Sue. Looks like you have a source of seeds at hand that will produce a nice range of pink and red flowers. Maybe you could take a few and leave a few.

Yolanda - yeah, a kilometre of gorillas in central Milan. Doesn't bear thinking about ..
Kate - oh, put a sock in it ....
Everybody - thanks for visiting! I'll let you know next year how far they've advanced.

Gorgeous hollyhocks, Sue. I remember them as a child in granny's garden. Mine just leaf then burn to a crisp, however much water I give them. Maybe next year they'll flourish if we have a proper Spring, unlike this year's weird weather.

Sue - love the b&w shot! Good clickin'! BTW - I appreciate your comment about not all badgers being rabid. It was not my intent to paint them all with the same brush. I'm sure the Hairless Albino Northern Italian Balcony Badgers are quite docile.

Now that is a wonderful guerrilla gardening job! Anything much smaller than the hollyhocks would have just been lost between the tracks--they have great presence there, so many people notice them, I bet. Plus, it would be hazardous to navigate the tracks to weed out the hollyhocks, so I bet that they stay! :)

I have been involved in some guerrilla gardening my self. At the near by feed store, the lady that owns it is always trying to grow something in three large pots in the front. They are in almost complete shade and she has always failed. With out any one knowing I have planted Giant petunias in one, Shrimp plant in one and Turk's Cap in the other. She now brags about her gardening skill and how the plants came up on thier own and always look good. I'm happy that she's happy. Bob

Hollyhocks are a favorite of mine. Roses, I can grow, hollyhocks I have had no luck with two years running. Friends tell me, "I just throw the seed on the ground and the spring up". Not sure what i'm doing wrong. Will try again in the spring..... Great blog!!!!!