Chrysanthemum cuttings ... or not? 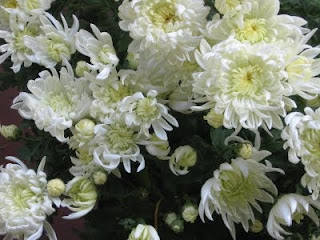 All the gardening books are adamant - Chrysanthemums will do better if you start afresh with new cuttings each year than if you just let the old plants sprout again.

I've always been very obedient. Over the winter the old plants die down, but by spring, shoots are - well, shooting up from the base. And I always pull them off to use them as cuttings.

This isn't intended to be a how-to post, but just in case anyone is interested, it's dead easy. You need shoots at least two inches long. Pull them off gently, then cut the stem straight across just below a leaf node. Again gently, pinch off the lower leaves, leaving just a couple at the top. Pop them into some damp potting compost and - well, just wait. They may look a bit floppy at first, but one day (a month or so later) you'll suddenly notice that they've perked up - and you'll know they've rooted. 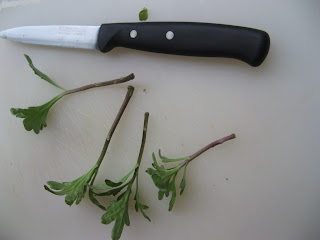 There are variations on a theme of course. You could try dipping them in hormone rooting powder before planting them. But I never have, (I can't get the stuff locally)and four out of five have always made it - just plant more than you need. Or you can cover them in a propagator - but I'm getting ahead of my story.

We've had an exceptionally cold winter. Lots of my plants haven't made it and, for the first time, that includes my chrysanthemums. Last autumn I had five plants in this container, all taken from cuttings the previous spring ... 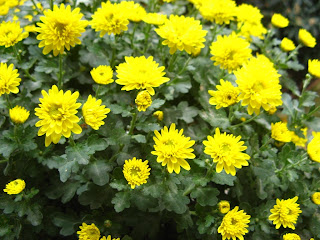 ... by this spring only two had survived, and another plant (top photo) was looking extremely sorry for itself. 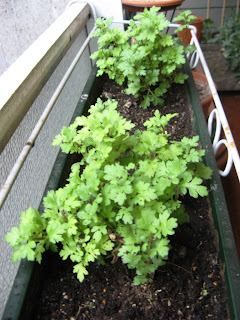 Now, by rights, I should have stripped all three plants of their new shoots and potted them all up to create new plants. But the bad weather has meant putting it off, and off, and off. Up to ten days ago, night-time temperatures were still below zero - not the best time to take cuttings.

I'm one of those people who, though having enormous respect for the experience of experts, does like to see things for myself. It's not that I don't believe them - I just want to try it out. So I thought that this year I might try an experiment. For the large white variety which was half dead, I've salvaged two cuttings and thrown the mother plant away. But for the little yellow variety, I've mainly left them as they are, only taking enough cuttings to fill the gaps left by the ones that died this winter. Three cuttings have gone into the spaces around the two survivors and I've got a couple more in pots in case those three don't make it. Will the gardening books be right ? In the autumn we'll see which are producing the best blooms - the old plants or the new cuttings. 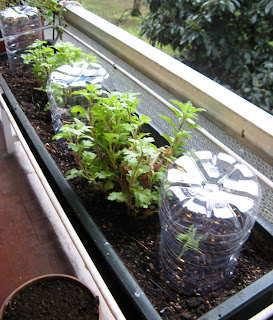 I'm giving the cuttings a bit more help than usual this year though - by covering them to create a more humid, and warmer atmosphere. I've never bothered before, but with the long, cold winter having delayed everything, I reckon they need all the help they can get. The DIY "propagators" are just cut-off mineral water bottle bottoms. They can either be pushed into the soil around the plant (if it's already in its growing position), or fitted over small pots. 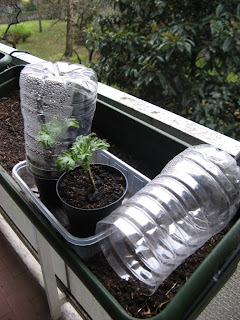 I'll be interested to see the results of your experiment! I never used mums' cuttings. But I need more plants, so I might try! Thanks for the idea, Sue!

Like you I like to test things out and experiment. Often the advice given seems to be for show growing where you want a few enormous blooms rather than a long flowering period. It'll be interesting to see what happens.

Interesting to read about climate and gardening differences.

I am no mum expert at all.

Hardy mums overwinter here in the ground and are green year-round. I separate the offspring to keep the mom happy and rotund. I cut the kid's roots off below the ground and then transplant straight away into my garden without loss.

Mums are like sedums in my garden. I only need one plant of each variety to keep the plants coming!

This is great information. I never grow Chrysanthemums but it sounds like you do the same thing with them as I do with geraniums. I rarely take cuttings I usually just reuse the mother plant, sometimes cutting it back and letting it sprout new leaves.

I'm glad I read this post because although I'm always taking cuttings from houseplants I needed to be reminded to do this for garden plants too. Actually it's a great money saving idea for garden plants. Thank you!

I leave the old mums in the ground each year and don't grow new. I find the secret is to "pinch" off the buds (shears are fine) once a month, stopping on the 4th of July. This results in a beautiful show of blooms. Good luck!

For mums, I do the same as Pam's English Garden. Seems to be working for me.

I just found your site and am amazed at what you do with the space you have. You are certainly an inspiration to anyone who thinks they can't grow something because they don't have land.

Hi - I came by to say "hello"! I love mums too, especially the white ones like in your picture!

An interesting and informative post. I enjoyed seeing your 'propagators' - I use water bottles too, although I cut off the bottoms and use the tops. That way I can choose whether to have a sealed unit with the cap on or take it off and let some air in. I look forward to visiting your plot again in the future

I'll be interested to see how your experiment turns out. Your last year plants look beautiful.
I haven't tried taking mum cuttings and didn't realize how easy they are. Thanks for the info.
Happy spring!

I've never even heard this advice, to start over from cuttings, and I'll be interested to see the results of your experiment.

thanks for the informative post! One year I threw the spent plant to compost in the swamp and the sext year it had sprung back to life in bloom again!

Wow! Without even trying it survives! Maybe I should put them in a shade when I do cuttings.

Guess what? I finally got some mums cuttings to root!