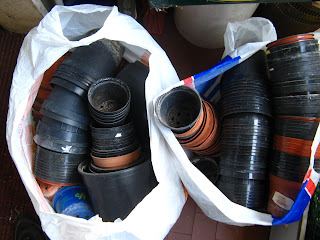 Work on cleaning up the back balcony has begun, and the first job had to be making enough space to move around. I knew that this had to be the year that I finally decided to throw away some of the plastic pots that had been accumulating in the cupboard - and recently overflowing out of it. Why? Because I hate throwing plastic away and for 17 years, since we moved in, have been keeping them to reuse. And of course, I have re-used them. However, it was getting to the point where I had enough to open a nursery - and no more space to store them. So out they went - well, half of them at least - off to the recycle bin.

But while I was clearing them out of the cupboard, I kept coming across something else. These ... 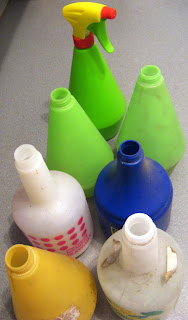 Plastic spray bottles. Nozzleless or with nozzles not working. Of course - because whenever have you bought a spray bottle whose nozzle worked for more than about three months? So you have to throw it away and get a new one. Because the makers couldn't possibly sell nozzles that work, could they? Or if that's too great a technological challenge, at least sell spare nozzles, so that you could keep the bottle and just fit a new one on. It drives me up the wall. Why do I absolutely have to buy a new bottle every time the nozzle stops working? Why doesn't every spray bottle come with five nozzles? Why can't I buy spare nozzles in packs of ten and keep the same bottle for ever? The amount of plastic saved would be enormous.

Yes of course, they go to the recycle bin too. But we all know that recycling isn't nearly as good an option as not throwing the stuff away in the first place.

Maybe it's just here. Maybe everywhere else in the world nozzles work for years. Or maybe your bottles always come with a large pack of spares. But I suspect not. I suspect profits might be seriously hit if we didn't have to throw the whole thing out every few months and buy a new one. Well, I for one would happily pay five times as much if the makers would just provide one that could be guaranteed to last five times as long. I mean - a nozzle. It's not really rocket science, now is it?

I've never had a nozzle that worked for very long either and it is ridiculous. You're right! Actually, I've just thought that I'll save the next window cleaner bottle and use that in future, because those nozzles work a lot better. It should be ok if I give it a good wash out.

Dear Sue, How this posting strikes a chord. All those plastic pots that will surely be of use and, in my case, seldom are but which remain taking up valuable storage space. No longer, for everyone in, two must go to the recycling bin. I frighten myself at this new found discipline.

And yes, I experience exactly the same as you with the sprayers. I ask no more from them than to spray, not squirt, water with feed at the leaves of my plants. In 2010 is this too much to hope for?

I'm with you on the plastic pots issue... I have far too many and it's just getting silly now. Especially as I use around 20 a year, and yet I probably buy in that many too... I'm going to have to bite the bullet and get rid of them!

I've (had to) become picky about which pots I chose. Otherwise, I shudder to think about how many I'd have. All I ever use them for is flower bulbs and propagation, and I don't need a million pots for that, right?
But throwing away so many still doesn't feel right, either. Stupid plastic. *sigh*

I feel your plastic pain- I have way too many as well. I am hoping to get rid of many of them this year as I am planning on forcing vegetable seedlings on all of my friends in an attempt to interest them in gardening!

Hello Sue. Thank you for the massage. Wow, you too have a lots of plastic pots. We also have tons of empty Plastic pots and casein my shed.

Oh the joys of recycling! There never seems to be enough room to store the treasures you just might need one day. And then every once in a while, I am sure glad I kept them. Last year, I used about 75 pots to give away raspberry plants to family and friends.

But don't get me started on the plastic spray bottles!

I agree with you about the nozzles. For a simple piece of technology they are amazingly erratic. I can't bear to throw plastic pots away either and try to reuse them but there is a limit to how many you really need (or can store).

I agree the nozzles suck, but we can at least get replacements at kmart and places like that. They don't work well either :)

I'm a hoarder of pots also. Mine fill the greenhouse and can also be found under several cedars outside. We have a cool section in the county recycling yard - you can leave things that others may have a use for. That's where my pots are going.

I'm with you, Sue - I hate throwing anything away if there's possibly a use for it, but those pots do reproduce over the winter, don't they? At least they CAN be recycled.

If mine are reproducing, will they give birth to baby six-pack seed trays?

I found the perfect spray bottle over two years ago: http://kwazar.fi/?tuotteet/mercury.html. It sprays two times per squeeze and is still working perfectly. It did cost 13,90€, much more than the cheapest one, but has out lasted several of them. I don't remember when i bought it, but the bottle is in my blog post in march 2008. The manufacturer is Kwazar. Maybe you can find one of these somewhere?