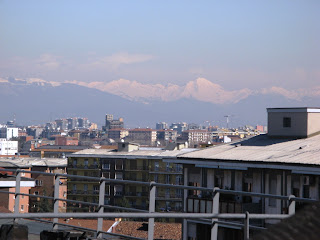 Again. With temperatures predicted to drop to -6°C (21°F). Just when I'd started crowing that we'd turned the corner and spring was on its way. But it was. Temperatures were up around 16°C (61°F), the new spring grass was bursting through, the magnolia was in bud, and I'd even seen the first Forsythia in flower.

Then yesterday at 4pm I came out of a seminar, where I'd been all day, and stopped dead in my tracks. There was bright, bright sunshine and a clear blue sky - but the temperature had plummeted to 2°C.

It's the same today, with the forecasts predicting snow between tomorrow and Tuesday.

Snow in March doesn't happen every year here, but neither is it particularly rare. I've found records from 1995, 1998, 2001 and 2005. It doesn't usually last long - there's even a saying Neve marzolina dura dalla sera alla mattina which translates as March snow lasts from the evening to the morning It loses a lot in the translation as you miss the rhythm and the rhyme. Maybe : In March it snows in the evening then goes. Read as da DA, da DA, da da DA da, da DA. But back to the plot .. 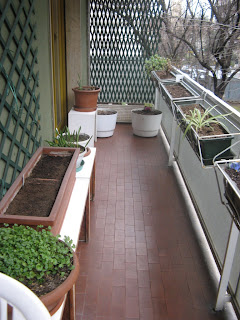 I've spent the past few weekends clearing up after the winter and starting to get seeds in. The front balcony is now looking pristine if a bit bare. But that will soon change. The corner by the living room doors is already full with the pansies and primroses I wrote about before, and wallflowers and bulbs which are coming on nicely. 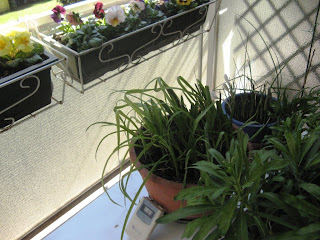 A lot of the bulbs are from my London garden - they're just a selection of stuff that I dug up when I was clearing up last summer. As I didn't recognise them, I brought some back to plant here - to see what I'd get. Still not sure what's in the first pot here. The long leaves are possibly Snowflakes and in the middle there are some hyacinths. Very small though - I'm not expecting them to flower. The blue pot at the back has crocuses in front, which are now starting to bloom. All white so far - I wonder if that's chance or whether I've now got a London garden full of white crocuses? I hope to be there next week, so should find out. I don't know what the larger ones at the back are yet -we'll see.

This weekend should be dedicated to the back balcony - which is still in a dreadful mess, partially because my main method of clearing up the front was to shift all the rubbish to the back. But with temperatures at only 2°C, the idea of getting out there looks somewhat less attractive. 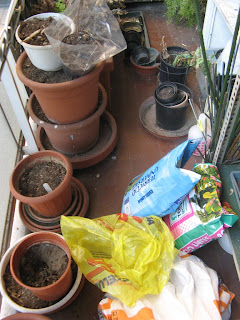 My seeds are all safe from the low temperatures as they're sitting happily indoors in their propagators. This is the time of year when my long-suffering husband starts to mutter that normal people have a bedroom, so why is it only us that have to sleep in a greenhouse? Most of them only went in last Sunday, but a few have already started to sprout. Here come the Morning Glory that Briana sent me when Bilbo came to stay. 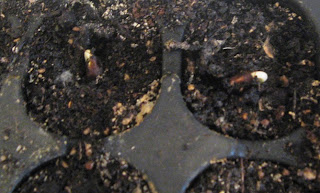 The only advantage of the current weather is that we can see the Alps - unusual in Milan as the heavy smog generally obscures them, despite the fact that they're only about 30 miles away. 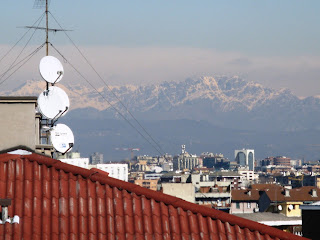 Heavy rain last week must have cleaned the air sufficiently to make them visible. The photos were taken from the roof of our building this morning. 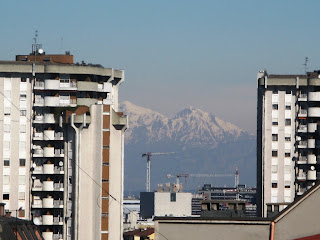 Wow, how fabulous to see the Alps! It brings it home to me how clean our air must be, since we can see the much more distant Pyrenees when it's clear. The tidy balcony looks great, and the other one... well I suppose it's the equivalent of the spare room!

I think most of us use this method of shifting the clutter from one end of the house to another, till there are no such 'ends' left, when it is time to actually declutter.
The Alps look stunning. With a view like this, even if limited to this season alone, I think you are very lucky.

Hi Sue! Last year, we had snow on the 15th of March. I hope, nothing will happen this March. Your first balcony is so clean and nice! I hope this weekend's weather will allow you to work on second one. If not, you have another pleasant "job"- to admire the Alps. What a view! I can't wait to visit Italy for the very first time in my life this April-May!

Dear Sue, The temperatures in Budapest have, indeed, been very similar to that which you are experiencing in Milan. A few days ago we had warm daytime sunshine, and then suddenly much colder again. The last of the latest snow only finally disappeared during the early part of this week.

You are well ahead on your balcony plantings but, oh dear me, moving the front to the back....!!

What a glorious view of the Alps. I have added myself as a 'Follower' so that I do not miss out on your future postings.

The wind's in the east again. It's tracked all the way to this corner of SW France. Beautiful sunshine today at 12C but forecast -5 tonight.

This winter has dragged on!!!

Good luck with all your seeds and oh, lucky you, views to the Alps.

What great photos.
I used to live in Rome, without such great views.
Have driven through the Alps many times, love them.

How fun to find your blog... thanks for stopping by mine. We are traveling to the Italian Alps in September, so I'm enjoying seeing your real life balcony garden and the views beyond.

I read the title of your blog and got confused. I had just read the same thing on a Seattle blog. They had thought they'd escaped more snow. Here in the Northeast USA, we've still got a few inches of the white stuff everywhere. A few hardy hellebores have been trying to rise above the snow and bloom, but we still have more winter ahead of us. Seeing the alps from your building huh ... I guess I'm really not in the states anymore! Beautiful. (thanks for visiting my blog!)

What gorgeous pictures of the alps. So exciting that Spring is near enough to touch.

This winter has been unusually cold and snowy and spring will definitely be late this year. I guess big parts of the world have had lots of snow. However, soon your baloconies will flousish!

It is a beautiful view! I love that you seem as obsessed with the weather as I am...enough to look up records :). Sorry about the snow. We are finally FINALLY warming up.