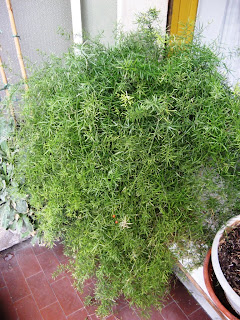 When I'd shifted enough pots on the back balcony to give me room to move, another space hogger confronted me. My wild asparagus.

I've blogged about his history a couple of times. He self-seeded in one of the containers (goodness knows how) and then stayed apparently dormant for several years, growing no more than four or five short fronds while the root system developed. Until one year he exploded.

Two years ago I'd had enough, turfed him out of his pot and cut back the roots. Radically. That held him for a year, but last year he was back in full swing and again quadrupled in size.

So I thought I'd try another tack. It was time to enrol him in the marines. Because what's the first thing that happens when you join the marines ? 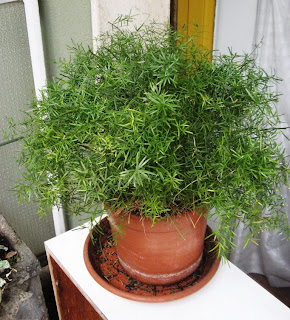 You get a haircut.

I am amazed at how well it grows in the container!

Dear Sue, I so enjoyed your description of taking the Asparagus Fern to join the Marines. He is certainly a fully paid up member now!

I once had one but lost it quite easily through over, or indeed under, watering. Whatever, it is no longer with me!

LOL! He certainly is a vigorous boy. :)

It's a cute monster!

Wow, what a plant!

I love Asparagus Fern. You are lucky to have such a fine one -- and he does look better with his buzz cut. :)

I thought it was a very nice haircut, quite stylish.

I have this plant myself and it's a hardy thing ... keeps popping up everywhere. I've given up giving it a short back and sides as that just seems to be a signal to triple in size!!

The Marines will also put him back into line if he strays out of it...I know. I live in a town full of them :D

Haha! He actually puts me more in mind of an unruly musician than a marine. Nice haircut. :)

I had one of these also seed grown and in a pot for years. I too pruned the roots and gave it regular haircuts to keep it in its 14 inch pot. Eventually, due to lack of light in my previous house I was forced to throw it away.

Ha ha ha...for the first time I learnt that the Marines can help with our garden!! I'll send my plants to enrol with the Marines too if they need a trim! *wink!* wink!*