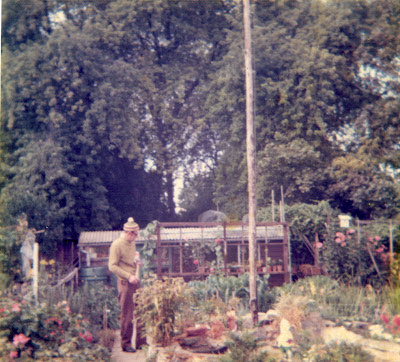 The Balcony Garden is one year old today. This time last year I was lying in bed, told by doctors to spend three weeks absolutely immobile after a leg operation. And I was fed up. We'd had to cancel our holiday for the second year in a row, I'd read every book the library had to offer, and I was sick of watching TV. Then my son said - Why don't you start a blog, Mum? My original reaction was What have I got to blog about? but the idea stuck, and germinated ...

What I didn't realise, the day I started writing, was that it was also my Dad's birthday. Fitting, because he was the most passionate gardener I've ever known. He would get up at five in the morning so as to get a couple of hours in the garden before he went to work, and over the twenty five years that he worked on the garden of our last house, turned it from a bramble infested jungle into perhaps the nicest garden of its size and type - ours was just a typical London Council house - I've ever seen. His passion was flowering shrubs, and the weigela, philadelphus, hydrangeas, crab apple etc that he planted are still there today. What was planted was subject to negotiation with my mother, who had no interest in gardening, but wanted her lawn, her rosebed, plenty of cut flowers for the house and a steady supply of fresh vegetables for the kitchen.

Rummaging through my photos today, I realised I have none that really reflect what it actually looked like by the end. The one above must have been taken about five to ten years after we moved into the house - late sixties or early seventies. A lot is not yet in place - the shrubs all down the side bed, and the conifer in front of the washing line post which has now grown to obscure it entirely.

At the time, gardening didn't interest me at all. Perhaps, just as well, as I don't think Dad would have taken kindly to anyone else touching his plants. But I inherited from him a large stack of gardening books, and most precious of all his notebooks.

Dad was a self-taught gardener. He left school at fourteen and today would undoubtedly be diagnosed as dyslexic. Reading was not easy and writing even less so. Yet he kept notes, year by year on what he had sown and when, what the gardening books recommended, and how successful they had been.

He died twenty years ago. Shortly afterwards we bought the house from the Council and it's now mine. Since my mother also died it's mostly been tenanted, but I sometimes get to go back for a couple of months in the summer. I've come to terms by now with the fact that tenants are rarely gardeners, and I always find it in a mess. So every few years summer generally means two months of painting, decorating and gardening. Which was the plan for this year, until yet again health problems kept me here. But next week I finally hope to get back. Watch this space.

That was beautiful. Gardening must be a great way to keep feeling in touch with your father.

My Dad was not a gardener, but I like to believe had he lived, he would have become one. Very nice tribute to you Dad.

Sue,
If you are back in London and have some time pop by the Thrive garden in Battersea Park on Sunday Aug 12. No pressure to help out but I think you will enjoy seeing what they grow and how well it looks.
John