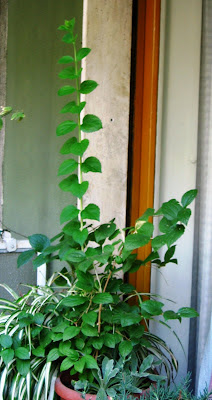 I've had several plants this year which have seemed to be growing well, but haven't bloomed. Apart from the ones I mentioned in my last post, there's my Philadelphus, which has got much bigger and looks quite happy, but didn't flower at all. It's only the second year I've had it - is it just too early or am I doing something wrong?
And in the bottom right-hand corner of the picture you can just about see a pink mesembrantheum which I can hardly ever get to flower. Yes, I know I should restrict the amount of water it gets, and I do. I got about five flowers last year, but this year again nothing.
A much bigger disappointment though has been my Mandevilla. I got it from the garden centre last year when it was small but already in flower. It continued to bloom all summer, and also grew considerably. To get it through the winter I cut it back and took it indoors, where it continued to grow back all winter - it didn't seem to rest at all, and I wonder if that might be the problem. It went back outside in the spring and is now growing up a trellis against the wall of the balcony. There have been two problems - firstly that it's lost a lot of lower leaves - they gradually turn yellow and drop, though I can't see any pests and don't think watering is the problem - and secondly, it hasn't flowered at all. Not enough sun perhaps? The balcony wall only gets direct sun for a fairly limited amount of time each day. 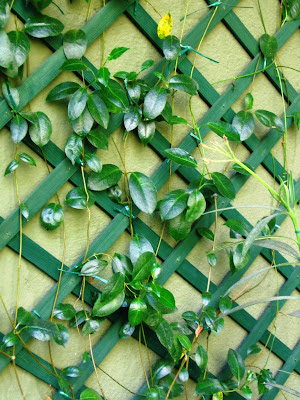 And then there's this lot - irises, calla lilies and agapanthus. I planted the agapanthus and the irises in December - OK, not the best time. The irises have hardly done anything - next year perhaps ? But the agapanthus seem to be doing OK except for the lack of flowers. My books say they flower July to September, so I'll keep hoping for a bit longer. The calla on the other hand have been in there for three years now, and every year it's the same - great leaves but no flowers. What's my mistake? 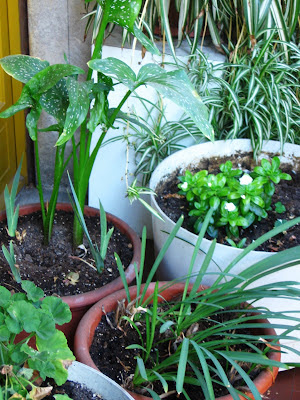