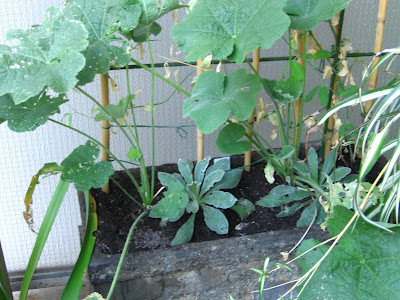 I said in my last post that there were a few plants on the balcony which I've had to give up on - they've either done generally badly or just haven't bloomed. This is the case of four plants on the back balcony - my hollyhocks, lychnis, sweet peas and foxgloves. The first three are in the photo, and the fourth would have been but it finally died completely.

After last year's really good results, I was particularly disappointed by the hollyhocks, Althaea rosea. I'd planted loads, intending them to be a focal point this year, but though a good number made it, they've remained very small and haven't flowered at all. they were also amonst the plants most damaged by the caterpillar plague, as you can see from the photo.

The caterpillars don't explain the weak growth, however. I did a couple of things differently this year, any one of which might have made the difference. Firstly, I didn't sow them direct but in small pots, and then potted on gradually. Secondly, they were all on the back balcony rather than the front - and nothing does as well there. Next time, needless to say, I'll be sowing direct and out front. Being at the back also meant they were in different containers. Was it a size problem? I don't think so as there wasn't really any difference. Was the soil not rich enough? Did I sow too late - the books say May, but mine always go in in September. I can't keep seedlings over the summer - my plant sitter always drowns them while I'm on holiday - and as we have a long warm autumn here, I can usually get away with sowing biennials as soon as I get back in September. It certainly didn't cause problems with the previous plants.

So - do I start again, or should I just move these out front, and see what happens the second year? One thing I hate about gardening books (and there are others - but that's for another post) is that they often tell you things without giving an adequate explanation. In this case, concerning hollyhocks - "They are often treated as biennial plants though true perennials". (from Percy Thrower's Everyday Gardening

- one of the old gardening books I inherited from my Dad but still find really useful. I mentioned it in a previous post last September.) OK, but why? Is it because they're invasive or get too big otherwise? Because they don't flower so well in successive years? Because they don't make it through a hard winter? Tell me why Percy and I can decide what I want to do.

One of the other plants in the photo, Lychnis coronaria, seemed to be growing as well as usual, but just didn't flower. They like sun - maybe they didn't get enough - except that in this case they were in just the same position as last year, and last year flowered.

The sweet peas, lathyrus odoratus, are very sad as you can see, and were pulled out as soon as the photo was taken. I love sweet peas and try obstinately to grow them here even though I know that they hate the hot, humid conditions that we have. The same thing happens every year. They're doing well in spring, but then succumb to red spider mite - and no amount of spraying seems to make a difference. Last year I got one flower spray from them. It's the most I've ever achieved.

Much the same happens with my foxgloves, digitalis purpurea. They seem to be doing well all spring, but never flower. And then when the heat sets in give up the ghost. Here I wonder if I might not do better if I could sow earlier - that way they might be ready to flower while it was still relatively cool.
Sadly, these are not the only plants which haven't done well this year. More in the next post ...
Posted by Sue Swift at 11:39 am