Blast from the Past Tuesday : Intergalactic Plant Exchange

Do you ever think back to all those posts you've written, especially those which were your favourites, and wonder how many people still read them? I do. And so for the next few weeks I'm going to be "reviving" an old post, from at least a year ago, every Tuesday. If you'd like to join in and do the same - and it doesn't have to be on Tuesday - just re-post something which is at least a year old, then leave a comment below with a link to your blog so that everyone can find you.
This week's Blast from the Past post comes from September 2006. 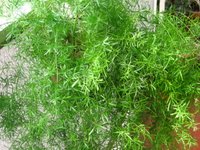 The plant in the photo is my wild asparagus. I found it growing in one of the containers a few years ago, and at first didn’t know what it was. So I stuck it in a pot to see what happened.

At first – absolutely nothing. For the first couple of years, the original four or five three-inch spikes just sat there looking boring and taking up space, so that last year I was on the point of throwing it out. And then it suddenly exploded and grew at a rate of knots. It’s still not the most interesting of plants, but I love the bright green of the leaves, and it’s very useful for providing foliage in vases of cut flowers. 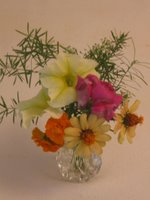 Where did it come from? It must have just drifted in on the wind. Plants do seem to be fairly good at finding themselves new homes. Watching Star Trek : Deep Space Nine the other night I was amazed to see that Bromeliads are well established on the planet Bajor, at least 50 light years from Earth. In fact, one of the characters Vedek Bareil explained that he had studied to be a gardener, and that Bromeliads were his passion. Now how did they get there? I can take teletransportation and holodecks without blinking, but the idea that identical vegetation evolved on two such distant planets is stretching it too far. Seeds thrown into space after an asteroid impact and left to boldly go where no plant has gone before ? Unlikely. 50 light years is a long way without Warp Drive …

No, as any self-respecting Vulcan would tell you, such solutions are just illogical. I suspect that it’s the result of an Interplanetary Seed Sharing scheme, or something of the sort. If you were visiting Vulcan, Bajor or somewhere, wouldn’t you want to bring a few samples back? So next time someone knocks on your door and asks if they could take some seeds from your Schizanthus or cuttings from your Chrysanthemums, just look for the tell-tale signs. Pointy ears, odd ridges on the nose or forehead, attractive blotchy patterning around the hairline – you could be taking part in an Inter-Galactic Plant Exchange.

Cute theory Sue. I like the idea of reposting. For those of us who haven't been blogging long it gives us a chance to see some of the older stuff and get to know you better.

Great idea Sue. I might give it a go just for fun! Val

Oh bother! If that's Wild Asparagus, then what we've got isn't! Oh well, never mind.
Reposting, not sure about that. Will have to think about it, which could take weeks lol!