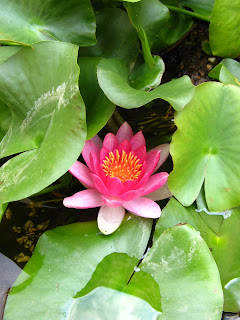 Claude Monet is perhaps the best known of the impressionist painters. But he was also a gardener, and created one of the most beautiful gardens in Europe, at Giverny in Normandy. And for thirty five years the flowers from the Giverny garden were crucial to his art.

I did my first degree in Cardiff, still my favourite ever city. The Uni. is in the town centre, and just down the road is the National Museum of Wales, where I spent I don't know how many lunchtimes (admission was then, and is still now, free). Don't ask me what the museum contains in general - I can't remember. I always headed straight for the art section - either for the Pre-Raphaelite paintings or, much more frequently, to see the Monet water lily collection. Where I would sit, maybe just for ten minutes, and look.
Monet produced 250 paintings of water lilies, so it's not surprising that many important galleries have a collection. But obviously, France has a prior claim. The painting below is from Les Orangeries in Paris. They built two oval rooms specially because that is how Monet wanted the paintings to be exhibited. 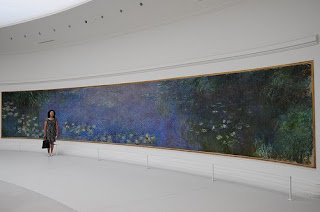 But since leaving Cardiff, I don't think I've seen one of Monet's paintings - until this summer when an exhibition opened at the Palazzo Reale in Milan. An exhibition which was doubly attractive because it linked Monet's work to the work of various Japanese artists such as Hokusai and Hiroshige. 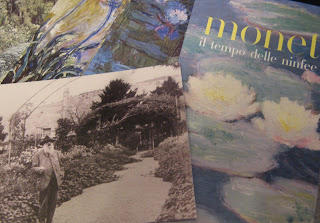 I have to say that, in comparison to what I'd seen in Wales, the Monet paintings in the Milan exhibition were a disappointment. There were two that I enjoyed, but some of the others left me cold. However, the exhibition was well worth a visit for other reasons. 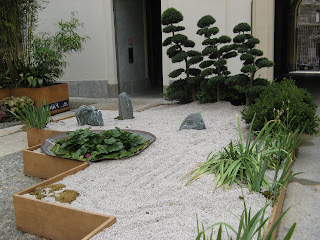 It started at the entrance, where they had laid out a minature "garden" representing both the lake in the garden created by Monet at Giverny, where he painted the waterlilies, and the Japanese influence on his work. Then the building. Palazzo Reale is a 14th century building in the centre of Milan, now used for art exhibitions. But its sweeping staircases and high vaulted ceilings are as much worth a visit as the paintings it houses. 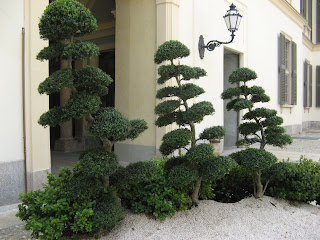 The Monet paintings, as I said were a disappointment. The paintings were small - part of Monet's appeal is the size of some of his work - and with the exception of two, didn't particularly attract me. But the interlacing of the Japanese prints and the information given on the influences on his work were fascinating, and the exhibition was well worth visiting just for that. 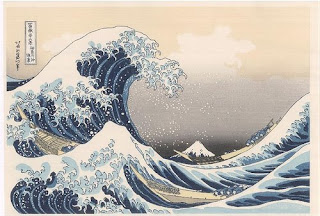 Monet never went to Japan, but collected Japanese prints assiduously and had a collection of 231 of them at Giverny. His own paintings often reflect the structure of the prints - notice for instance the similarity in the lines in this Hokusai painting of Mount Fuji and Monet's haystack series. But most of all they influenced him in their treatment of the natural world - the landscapes, rain, snow, trees and plants so often featured in the prints. 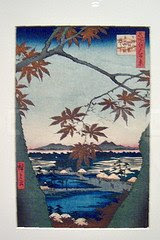 Because, although Monet's paintings include representations of people and towns (including some wonderful paintings of

London and Venice), his paintings above all feature natural scenes - many from the Giverny garden.

In the final years of his life Monet said "Gardening was something I learnt to do in my youth, when I was unhappy. Perhaps I owe it to flowers that I became a painter." 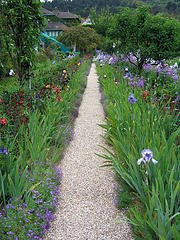 Giverny garden is divided into two areas : the flower garden near the house; and the water garden, where Monet painted his waterlilies and built a Japanese style bridge (though painted green rather than the traditional red of his beloved prints). A third area, a short distance away, was turned into a vegetable garden and orchard. For the first ten years Monet worked on and painted the flower garden, and then turned his attention to the boggy area behind it, across the railway line. To create the water garden he had to get permission from the local council to divert the course of a river - something initially strongly opposed by the local people who feared that the painter's "strange plants" would poison the water. 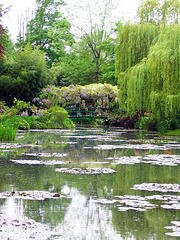 Monet worked on his water lily paintings up to 1925, a year before his death. He was 86.

Why did the impressionists paint as they did? I guessed long before I saw any official confirmation. It came to me one day in the early 70s as I was sitting on top of a 54 bus, crossing Blackheath in London. I am extremely myopic and slightly astigmatic, and for some reason which I don't now remember, that day I couldn't put my contact lenses in nor use my glasses. As I looked out of the window onto the heath, the world suddenly turned into an impressionist painting. At the time, I had no idea that the impressionists had sight problems, but yes - Cezanne and Renoir were myopic, Degas was gradually losing his sight as he painted, and both Monet and Mary Cassatt, the most famous female impressionist painter, suffered from cataracts which affected their perception of colour. And most tellingly for me, it is also said that Monet was astigmatic. It's said that he was once fitted for a pair of glasses to right his vision, but refused to wear them saying indignantly "If the world really looks like that I will paint no more!" I sympathise. I too am fond of my fuzzy sight. Not to the extent of refusing to wear lenses during the day - but oh how nice it is when I take them out at night and the world becomes a gentle, unfocused blur.

Now that I've seen the exhibition, Giverny has risen to the top of my wish list of gardens to visit. But when I go, I'm not putting my lenses in. I shall wear my glasses. And very,very often as I walk around, I shall take them off.


AcknowledgementsThanks to the following photographers for making their work available under Creative Commons Licence on Flickr. All others are my own :

Labels: Nature and Art, Off the Balcony

A fantastic post Sue! As a History of Art Graduate I enjoyed refreshing my knowledge of Monet plus the lovely pictures of the miniature Japanese garden. A real treat! Thank you! Val

Wow... what a great post. I never knew that about Monet collecting Japanese prints. I do really enjoy the Hiroshige/Hokusai prints myself, too.

What a nice piece about Monet, and interesting insight to their lack of 'perfect' sight. I went to see a Monet exhibit in Norfolk 15 years ago and loved it. Have Monet wallpaper border in the first floor bath...his Waterlilies. Is that sacrilegious?

Sue, unbelievable post! Thank you sooo much for sharing this with me, with us. I learned a lot from this post and I wish to see at least one Monet's painting. Live.

Very nicely done Sue! I loved that quote, too, by Monet on gardening. I'm a fan of Monet and have a few of his prints. Thanks for the educatin today!

A great post Sue - I had no idea that there was a Japanese connection with Impressionist painting. Your insight into why they painted as they did was also interesting. I'm reminded of JMW Turner painting his amazing sunsets after Krakatoa.

Wow! Thank you Sue, for sharing this with us. Monet, his love of Japanese gardens and water lilies, impressionists and their eyesight, these are all very interesting. Now, I got inspired to learn more on these topics :)