Blast from the Past Tuesday : On the Naming of Plants

Do you ever think back to all those posts you've written, especially those which were your favourites, and wonder how many people still read them? I do. And so for the next few weeks I'm going to be "reviving" an old post, from at least a year ago, every Tuesday. If you'd like to join in and do the same - and it doesn't have to be on Tuesday - just leave a comment below with a link to your blog so that everyone can find you.
This week's Blast from the Past post comes from January 2008. 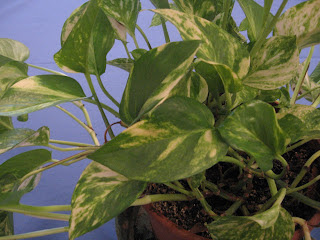 If there's a plant which I find easy to grow, it's Epipremnum aureum, commonly known as Hunter's Robe. That's the plant in the photo.

If that last paragraph had you reaching for the comment button to tell me I got it wrong - hold on. How about Scindapsus aureus, Pothos aureus and Raphidophora aurea? Oh, and as a common name, Devil's Ivy, Taro Vine or Silver Vine. Or Golden Pothos. Or Ceylon Ivy. Or my favourite - Centipede Tongavine. Yep, all the same plant.

I don't have a problem with the common names - it's fairly obvious that each region will decide its own name for a plant and more than one may filter through to common use. But why four official botanical names?

Well, according to the Royal Horticultural Society they're not actually all official, only one is. The others are referred to as "synonyms". And the reason for the alternatives is much the same as the reason for the difference in common names - before the era of global communication, botanists working in different parts of the world would often give "official" names to plants, unaware the plant had already been classified and named by someone else. Occasionally two different people might even manage to give the same name to two different plants.

So someone has to decide which name to use. The rule used to be that whichever name was given earliest won. But that occasionally meant that a name which had become more generally used lost out. So common sense now sometimes prevails and a later, but more widely used name is given official status.
The other reason that alternative names may exist is that sometimes they've just got it wrong, classifying a species under the wrong genus, so that the name has later been changed. Forget Coleus, for instance. It's now Solenostemon.

Again, common sense will sometimes prevail and the taxonomists (the people responsible for classifying plants) will sometimes let us keep the more common name, even when a change of genus is concerned. We were saved from Freesia becoming Anomatheca, for instance. Phew!

And then there was the case of chrysanthemums. In 1989 it was decided that the genus name should be changed to --- umm, er, what was it again? Doesn't matter. It didn't catch on, and at a recent International Botanical Congress (which is where they decide these things), they gave in and changed it back again.

Now personally, it took me a couple of minutes to get my brain around Solenostemon. I typed solestemon, solestenum and a couple of other variants before I just gave up and copied it out letter by letter. I think I may just stick with Coleus ...

Hello there,
I have been enjoying your garden tales for last one week.. perhaps this is my first comment.. Just wanted to say that in India we call this one as 'money plant' :)

I love it, mom had it growing on a huge wall when i was a kid. I grow it in water as well as soil pot.

I try to stay with the botanical names-- too many common names go with multiple plants.

This is an interesting and very informative post, Sue. Over here, we like to call this plant the money plant due to its evergreen nature and juicy leaves.

I'm with you on Coleus -- so much easier. The plant you've highlighted was always called a Golden Pothos in our house -- it grew at an impressive rate. :)

Coleus will do for me!

A very good idea - I enjoyed this post the first time round and it was well worth revisiting. It occurs to me now, the reason I can never remember the name of this plant, when I kept one for years back in the 80s, is that everyone I asked told me something different!

Thanks to everyone for commenting. Oddly, what I've always known as the "money plant" is something quite different - crassula ovata, which I posted about a while back. If you want to see it, just enter the name into the search box at the top of the post page.

This post was fun to see, Sue - never knew what we called Pothos had so many names! I've killed it a few times but think that feat would be more impressive if I had knocked off a Centipede Tongavine. The taxonomists may change the names, but can't make them live.