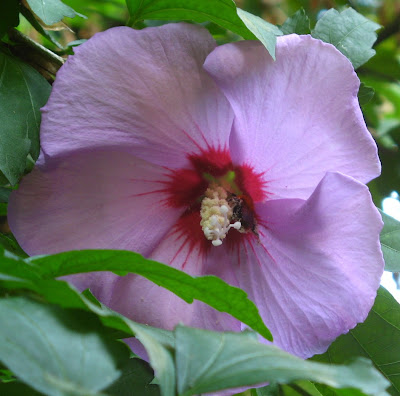 I spent much of last weekend tidying up the balcony and sowing biennials for next year. And as I was rooting around in my seed box, I found these. They were just laying on the bottom of the box and had obviously fallen out of a packet. But what were they? They were the cutest seeds ever - heart shaped and feathery - but I couldn't remember ever having seen them before. 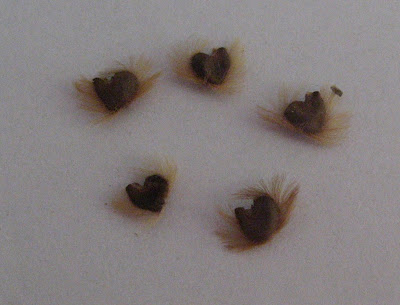 And then I came across an envelope marked hibiscus. There are a number of hibiscus in the gardens around the balcony, and I remembered that last year I'd broken off a couple of seed pods to save. And then forgotten about them. But over the winter the pod had dried and burst, and as I was scrabbling around for other things the seeds had fallen out. 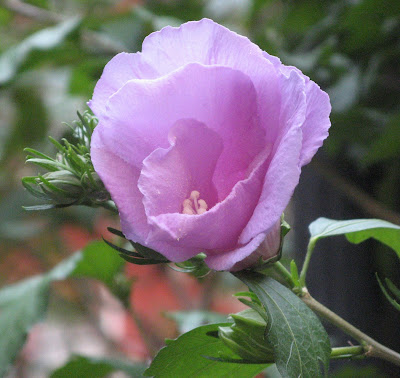 When I think of hibiscus, the first thing that usually comes to mind is a houseplant. But Hibiscus is a genus with over 200 members, but I'm fairly sure that the ones growing here are a species native to eastern Asia called Hibiscus syriacus. It's hardy and I also have one in my London garden. Here, there are over a dozen of them lining the alleyway that leads between the blocks. They've been planted in the middle of a privet hedge and several have been trained into a standard shape, so that the trunk is covered by the hedge and the bush just seems to be a round ball sitting on top of it. Others just poke through. They're just coming into bloom now, but very shortly the alley is going to look glorious. The blooms only last a few days, but there are so many of them that the bush always seems covered. 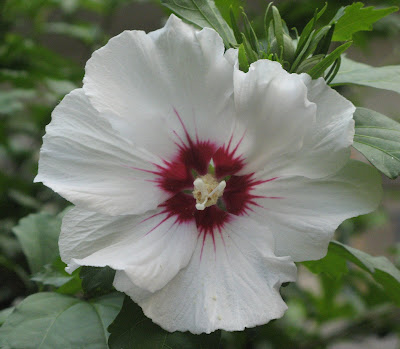 Walking past in the last couple of days, I've also been pleased to see that there have been a couple of bees buzzing around them. Bees have been scarce this year, and I'm not sure whether it's because I've neglected the balcony and have had fewer blooms than usual to attract them, or whether they're just not there. Look at the first photo and you can see one. He was literally drenched in pollen. 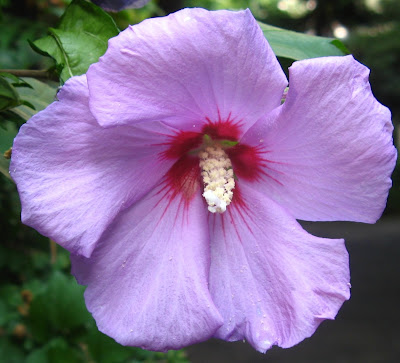 Anyway, the seeds are now in, just for fun, but I've taken some cuttings too, which are keeping my oleander and pelargonium cuttings company. Hibiscus is supposed to root readily - we shall see. 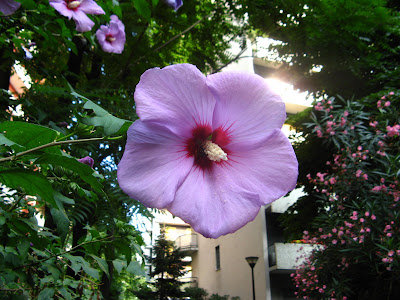 The flowers of H. syriacus are small in comparison to the tropical varieties, but they still blow me away. Definitely a plant to find a space for. And very undemanding. It likes sun and doesn't like to be too wet, but apart from that isn't particularly fussy. I have to admit to having a soft spot for a lot of plants in the Malvaceae family - I also have mallow and hollyhocks growing on the balcony and love them both. Here's hoping the cuttings take. 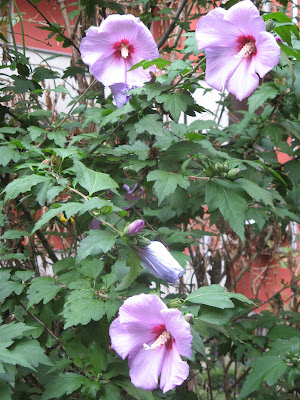 Labels: Flowering Shrubs, Off the Balcony

I just love those Hibiscus... we have planted a couple in the garden and I do hope that thery will bloom this year to. I hope your cutting will do the same / gittan

Your hibiscus are gorgeous! The seeds look like furry little hearts!

I lost one of my H. syriacus to the voles, so I have a new one...we shall see if my measures to protect it are enough.

Those seeds are so cute. Lovely photos.

Never seen seeds cuter! Makes you want to plant them as the plant is bound to be gorgeous too, and just what it is!! Your Hibiscus flowers are heavenly, so tropical. I adore the white and deep pink one so much, oh to be a bee!

Hi Sue! This is a wonderful plant. I used to have a tropical hibiscus as annual in my previous garden in Kansas City. For my recent garden in the Northwest, I bought a hybiscus that is supposed to tolerate winters.Will see! Thank you so much for your comment on my last post. I laughed and laughed and laughed! I have the same wish!

What lovely flowers and the colours are glorious! Val

How funny. I've been searching for a blue hibiscus trained in a standard for a pot I want to put together for (American) Independence Day. I guess this is their time of year and we all have them in the fore front of our minds...

Gorgeous hisbiscus! I so wish I had room for them in my garden. I may just have to make room! I have always admired their majestic beauty.