Skywatch Friday : Reminds me of ...

I don't have any particular knowledge of art, but there is one period that I've always loved - the art of the Pre-Raphaelites and the Impressionists in the late 19th and early 20th centuries.

And the precursor of both styles was JMW Turner, perhaps the greatest sky painter ever. If Skywatch Friday is looking for a patron saint, he's surely a candidate. He painted both in water colours and in oils - one of my favourites is this watercolour of Venice in the early morning, but have a look here for more of his work.

I got to know Turner's work when I was a student. I studied in Cardiff, but when I was home in London for the holidays would often go to the Tate Gallery, which has the largest Turner collection in the world. I hadn't thought about him much recently though - not that is until I downloaded this photo, taken from the back balcony one evening... 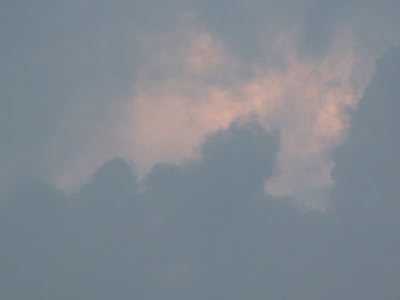 I almost felt I should be looking for Turner's signature.

Turner lived from 1775 to 1851. He started painting as a child, and after first working as assistant to an architect, started studying at the Royal Academy at the age of 14. He was fascinated by light, and many of his pictures are of the sea, showing the effects of light not only in the sky but also reflected off the water. There is a story that he once had himself strapped to the mast of a ship in order to observe a storm, saying later : "I got the sailors to lash me to the mast to observe it; I was lashed for four hours, and I did not expect to escape, but I felt bound to record it, if I did."

Turner's behaviour was a bit weird in general. He was a solitary, antisocial man with few friends, described by the French painter Eugene Delacroix as "Silent, even taciturn, morose at times, close in money matters, shrewd, tasteless, and slovenly in dress". Ah well, you can't have everything.

So there you are. My offering for this week's Skywatch Friday is a homage to Turner. Lots of other people have already posted their photos, and of those up so far, my favourite are these from the 7MNS Ranch in New Mexico. Turner would have loved them.

Fragile, beautiful colors! Does look like a painting! Thanks for sharing the beauty! Have a great weekend!

I like the soft blue sky and it does look like a painting...Wonderful shot. Have a great weekend. Happy Sky Watching.

Only the other week I posted a Turner inspired photo. I agree with you he was such an influence. My partner is an artist and Political cartoonist and Turner is his favourite, in fact he thinks he was the real first Impressionist. You captured the atmosphere and spirit perfectly.

Hi Sue and thanks for coming by my blog, yes you're right, they had a Prisoner gift shop at Portmeirion!!

That is definitely a Turneresque sky although I remember Camille Pissarro painting skies like that as well.

Arija - I didn't know Pisarro's work but I googled and you're absolutely right. I found this picture : http://thames.me.uk/s00120_files/charing_pisarro.jpg
I also found a quote from Pisarro saying that Turner's work had influenced both him and Monet, though he criticised him for not understanding the effect of shadow adequately.

Sky is inspirational, clouds can represent many things and sprouting ideas... such a great post Sue,
Cheers ~ Bangchik