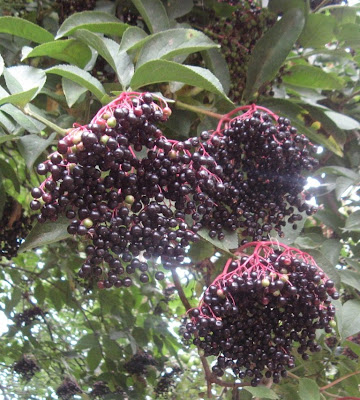 When I left England, there wasn't much in flower in the garden but it was full of berries. Red ones, orange ones, purple ones and white ones .... everywhere you turned there was a mass of colour. Folklore would have it that an abundance of berries in autumn heralds a hard winter, and if my garden is anything to go by, it's going to be a tough one ...

The purple ones were the elderberries. Strictly speaking these aren't in my garden, as the tree is actually in the park behind. But the branches have spread over my fence. In the spring the flowers must have been wonderful, and now there's a mass of berries. If I were there permanently, I'd have used them to make wine ... or a pie ... or a sauce. Just google elderberries recipe and see what comes up. I rather liked the look of this one from The Times Online. 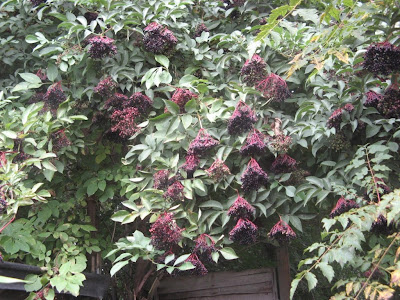 Sadly, the elderberry tree is leaning on the fence so heavily that it's bringing the fence down, and I've had to ask the council to lop it. I did ask them to take away the minimum possible though ... 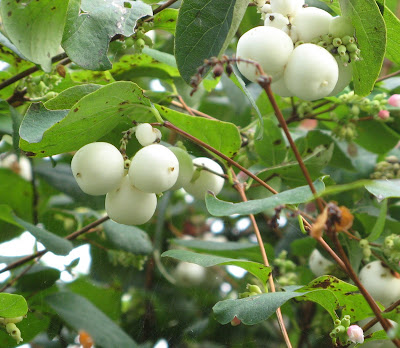 Then there are the snowberries. Snowberry is a scrubby little bush which has the extremely inflated name of Symphoricarpos albus - always sounds like something out of Harry Potter to me. Not a shrub I'd really recommend - invasive, and the leaves and small pink flowers are not desperately attractive. But the berries are nice in autumn. Mine self seeded years ago, and for years I toiled away trying to dig it up. But it always sprang straight back and in the end I gave up. However, it does have the virtue that it's just about the only thing which will grow in the shade of the cotoneaster tree. 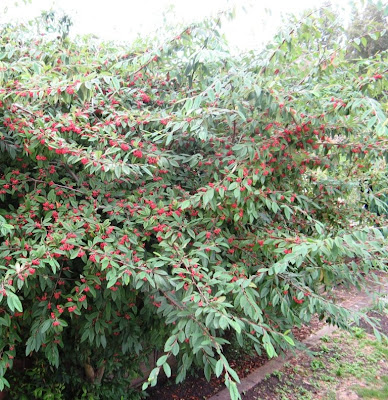 Not sure what variety this is, and can't for the life of me remember what its flowers are like. Sadly, I've not seen the garden in spring for over twenty five years. But it's always covered in berries in the autumn. 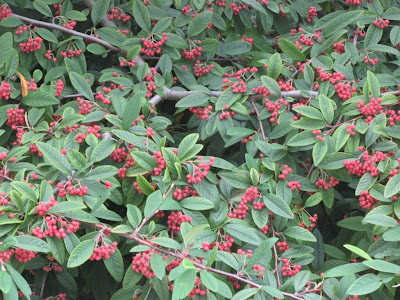 There's another cotoneaster in the garden as well - cotoneaster horizontalis - a much smaller shrub, but if possible with even more berries. 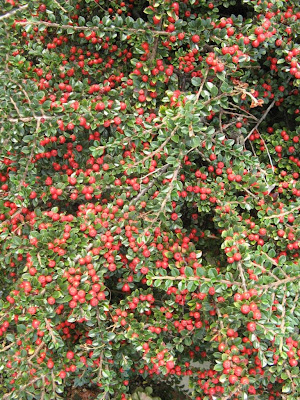 Cotoneaster is a word I have a mental block about. I have to look it up every single time I want to talk about the plant. It's odd, because that it's not that I don't know what the plant itself is - I do. But the name that always comes to mind is pyrocantha, despite the fact that I know perfectly well that it's not. So that's what I tend to call it to myself : the not-pyrocantha plant.

I do have a real pyrocantha though as part of my front hedge, currently covered in yellowy-orange berries. 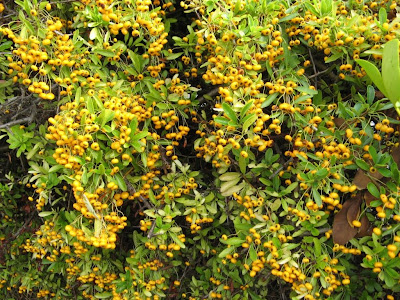 I curse it all summer when I have to cut the hedge - it's full of thorns which get through even the thickest gardening gloves. But the show in autumn makes it worthwhile.

So - if we are in for a hard winter, at least the birds will have something to eat. If you're trying to grow a wildlife garden, they're all plants to include. Different species feed off them all - though snowberries (which are poisonous to humans incidentally) are preferred by pheasants, grouse and other similar species. Not many of them in a London garden. But blackbirds are supposed to love the pyrocantha berries and the elderberries and cotoneaster seem generally popular. At the moment, with food abundant, they're being ignored. But once the fruit trees are bare, and there are fewer seeds and insects around, the situation will change. In particular, I suspect we'll soon be a favourite haunt of the rose-ringed parakeets. But more of them in another post...

HI Sue: Just dropped in for a visit and to look around some more.

Have a great day,
John

Yes, I love Cotoneasters, but I'm always confused about how to pronounce the word! Is it cotone-aster or coton-easter?

What a great array of berries! I had elderberry juice, similar to lemonaid, when we lived in Germany. It was so tasty.

Quite the amazing selection of berries. Makes me wish I was a bird. I do love elderberry pie,although it is a pain to destem all the berries.
I have snowberry (a vast quantity) in my garden and I find it very invasive. The roots run under the ground and will produce another shrub. I am always digging it up.
Thank you again for welcoming me to Blotanical, I was surprised to realize, just how many garden bloggers there are.

I never seen so many berries in a plant. They are so rich and beautiful. Didn't know snowberries are poisonous.
Wished I had tonnes of them elderberry for snack.

Phew! your garden seems Berry Berry rich. I wish I could have a share of the Berry pie.
Don't know about the name, but some wizardry is definitely on in your garden to have such rich produce.

I have never seen so many berry trees in one post and the trees are overloaded with multi-coloured berries! Hopefully, the tale of a hard winter won't happen. Thanks for the berry education. It was berry nice.