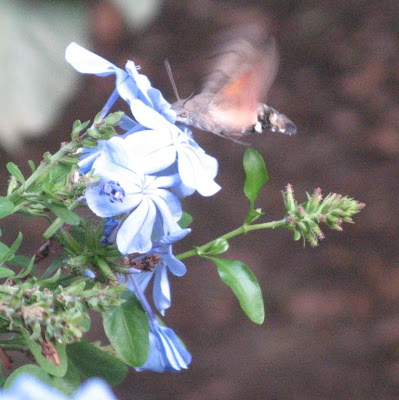 Mum, come quick - there's a thing on your plants!
And what a thing. It was a Hummingbird Hawk-moth (Macroglossum stellatarum) - an insect which visits the balcony occasionally, but is by no means common. If I see one a year I'm lucky, and this was certainly the first I've spotted this year. 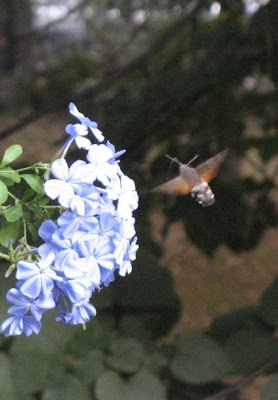 Excuse the not-exactly-perfect photos. They're not called Hummingbird Hawk-moths for nothing - they don't land on the plants but hover above them, keeping themselves alight by rapid wing flapping while they suck the nectar through their long proboscis (you can see it in the second and last photos). And they flit frequently from flower to flower. Which makes them difficult to photograph - especially when you've had to rush back into the house desperately trying to remember where you'd left your camera, and praying it would still be there when you got back. Which it was - but I had no time to worry about camera settings. I just clicked and hoped. However, if you follow some of the links you'll find some much clearer photos.

- a super book for basic identification of plants, birds, animals and insects found in the UK which I recommend highly), so later I went to look it up. They are apparently widespread across Mediterranean countries, central Asia and Japan, and get as far north as Scotland in the summer. In fact, following things up on the web later, I came across the UK Butterfly Conservation site, where you can record sightings. Mine's there now. 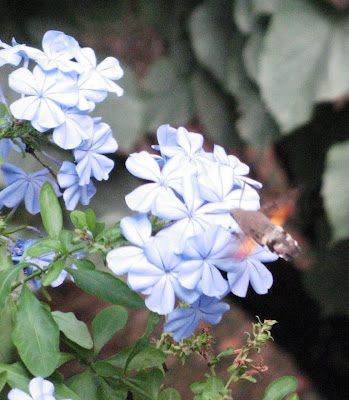 The adults love plumbago - that's where I almost always see them. But the book told me that the larvae feed on bedstraw.

My mind boggled. Was this beautiful insect in danger of dying out because of a lack of impoverished peasants stuffing their mattresses with straw? Were hypoallergenic fillings signalling the end of a species?

But no. Bedstraw is the common name of the genus Galium - which includes wildflowers such as Lady's Bedstraw and Hedge Bedstraw. I've not seen either growing much around Milan - which probably explains why we don't see the moths very often.

Moths. They look so different that it's hard to believe they really are moths - and one Italian site I found says that their visitors often mistake them for real hummingbirds. No sorry - not in Europe. I wish. 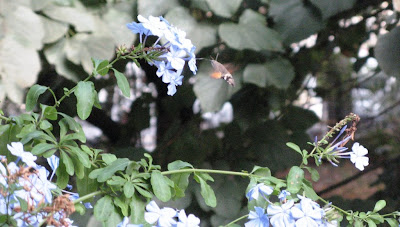 Ah well - that was my annual sighting, I thought. But then I came across this on the BBC Science and Nature site : Studies have noted that they have a remarkable memory, and return to the same flowerbeds at the same time everyday.

So maybe I should keep an eye open over the weekend.

I love hummingbird moths. I've seen them while out walking. They always surprise me as, bling, there they are buzzing about like a hummingbird, but not one. It was really exciting the first time I saw one.

I just adore those moths. Every once in a while I catch a glimpse of one, and not nearly enough.

We have seen them here in New Hampshire U.S.A. Don't remember any this year but last year and the year before there was an occasional siting.

The first time I saw one, I thought that it was a hummingbird. Do they not have hummingbirds in Europe?

It looks like a "missing link" where insect morphed into bird! What a curious little creature, but how lucky to have him in your garden. :)

Good shots. Thanks to you, I get to see these creatures.

Thank you for visiting my blog via Blotanical - good to meet another garden blogger in Italy. I used to live in Milan when I first came to Italy and found the weather there absolutely terrible - freezing fog or tropically humid, not to mention the mosquitoes.... Your balcony garden is v interesting so I look forward to following you. Your work in EFL sounds interesting too - I teach a course in English (on economics) at uni in Rome and the good Italian students recognise that they need the language as a key to getting on. Also I have an absolute thing about people who come to live here and don't bother learn Italian!
Y

These moths are so neat. I love your pictures of yours with plumbago. I've seen them a few times here in my gardens in s.e. FL, USA.

Interesting thatso many of you from the US say that you see them. The books/websites I've consulted seem to have them confined to Europe and Asia.

Deborah : No - no hummingbirds in Europe unfortunately.

Thanks for the comment Sue, and here's the update for you.

We always wanted to live in the village but ended up buying the finca, so then the plan was to stay here for five'ish years and then move. We reckon we'll have had enough of the hard work and constant monitoring of electricity and water by then!

Houses in our village don't become available very often so, when we found this one with the help of a village resident, we put in an offer. There's a fair bit of work needs doing to it though and I don't want to move in until all the mess is finished, although Steve would.

No, there will be no garden, just a roof terrace so I can grow tomatoes etc., but it may be possible to get a small patch of land on the edge of the village. In any case, if we can't sell the finca, I'll probably carry on a bit of gardening here, although that would mean a lot of toing and froing, being 2k from the village. We will see.

Very nice site Sue. Thank you for your comment on "A Small Tucson Desert Garden". We do have our challenges here but it makes gardening all the more fascinating. Congratulations on being selected best container gardening site!

We have hummingbird moths here in Northern Nevada, USA, and I love them. Unfortunately they grow from tomato hornworms, and a lot of people get rid of them at that stage. I haven't seen any this year, and I worry. Here the caterpillars' favorite food (besides tomato plants, I guess) is Mexican primrose.

I did not know that about them returning to same garden. very interesting. Your flowers were just too irresistable.
Rosey PS thanks for stopping by my blog. Congrats to you!
Rosey

I see them a lot on my Greek holidays. They are fascinating - and difficult to photograph :-)

I am so glad to know that the caters of Hummingbird Moth need bedstraw... as there is an abundance here in my gardens. I saw a black (extraordinary) one this year for the first time... how lucky you can just walk out on your balcony to have this jewel of a creature in your life. You got some good shots too ... they are very hard to capture. Carol

I love these. The first time I saw one was about 5 years ago in my garden. I had several of them. I couldn't tell what they were, but they were HUGE like a hummingbird. My husband is the one who told me about them.

I just saw one in North Texas, 5/21/12, so they are not only in Europe. I stared at it for awhile, then was a bit shocked when I realized that it wasn't a hummingbird. I came immediately to the internet to try to identify it. I'm glad that there was a lot of information on it. Otherwise I would have thought it to be an alien :-). Very interesting creature.