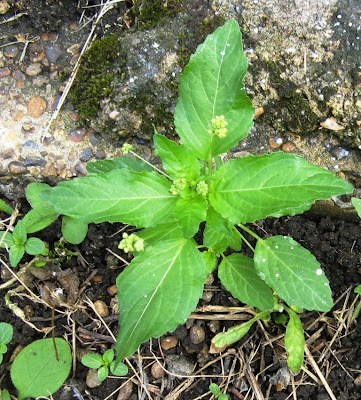 One of the advantages of balcony gardening is that you don't get weeds. Not having a garden means that, of necessity you're using bought - and sterilised - compost, and though the odd thing will float in on the wind, it's relatively rare. Tip the soil into your container, pop in your plants, and that's it for the season. So you get to be a bit ingenuous about weeds ...

One of the jobs I worked hardest on when I was in London in July and August was clearing and replanting the flowerbeds - I found them completely overgrown with grass and borage. I didn't even think of it as "weeding". The beds just had to be completely dug over and everything pulled out. 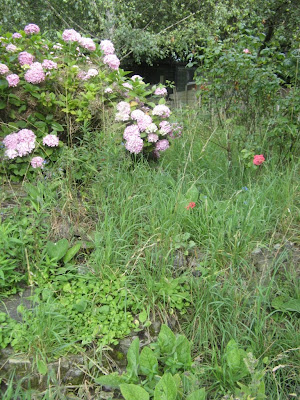 And then, I started planting. Bulbs galore went in, but I also scoured the local garden centres for special offers, so that I could get as much planted as possible on a budget that was rapidly being eaten up by the repairs that needed doing on the house.

So when I left at the end of August, the beds were looking - well, a bit bare, but I hoped the bulbs would take care of that. And there were new roses, pansies, lavender bushes and other things dotted around.

Two weeks later I was back. And walked into a sea of green - which certainly had nothing to do with the bulbs. The garden was covered with one particular weed, which try as I might I can't find the name of (?). I can't say I wasn't expecting it - but the speed with which it had sprung up was incredible. Plant seeds that you want to have in the garden, and after two weeks they're only just thinking of germinating. But these had just yelled Yippee! Bare soil and sprung up in their thousands. Helped along, of course, by a bit of grass and an entirely new crop of borage. 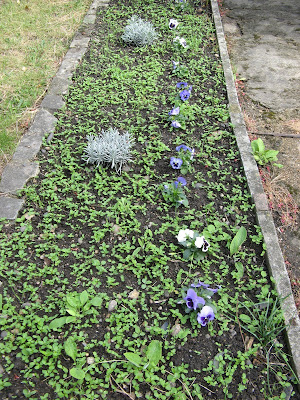 Luckily, they're a weed which is very easily dealt with. Grab a handful and pull, or hoe. They come out with no problem. So a few hours of hard work later, the beds were looking bare but pristine again. And even more luckily, they'd not had time to seed. I'm hoping that all the seeds that my August digging had brought to the surface had germinated immediately, so that I was able to get the lot in one fell swoop. 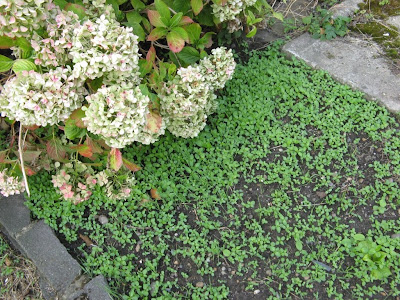 I can hear you laughing hysterically from here. No, I don't really believe it either. I'll be back in London in a few weeks time, and I'm sure I'll find the beds covered again. But if I get rid of that lot, and the next ones that come up are killed off by the winter weather, then maybe by next year things will be better. Please ...? 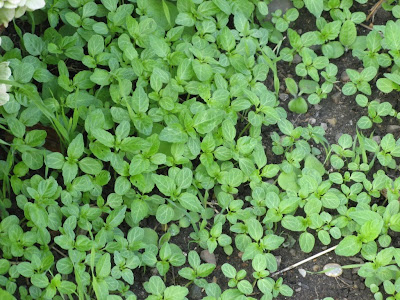 Hi Sue, loved your post, I have a love-hate relatioship with weeds I think. They certainly test our character and will! Borage is very persistant where I live too, but at least easily pulled out. The worst weeds are oxalis. If you don't manage to dig it all up, it divides into hundreds of baby bulbs, who laugh and cheer and jeer as they spread themselves around. Cheers, catmint

The theory is great... hope it works out that way!

Good morning Sue! I shouldn't read your post in the morning, because it reminded me about thousands of my weeds. They are shotweeds. Also easily removed. But it's me who need to remove them! Good luck to you!

Hi, Sue, I do hope you are able to let your house to someone who loves gardening as much as you do, and who will make your London garden truly bloom!! Pamela

Oh, Sue, I know how you feel, and you have my sympathy! I read that if not another seed was planted, there are enough in the soil to last 100 years. I wish I hadn't read that... too depressing!

This is why i'm a little obsessed with mulch. Acutally, these weeds are almost fun to pull - well, maybe not of this quantity - but there are some that are a nightmare!

Hi Sue... someone was saying "weeds today, veggies tomorrow that feed the world". I enjoy looking at weeds in the garden, just to understand their growth habit and pattern.

Some produce nice flowers but of course they get in the way of our so called own plants. So weeds has to go.. In my case, I keep some.
~bangchik

Like Tatyana, you have reminded me of much work to do here. But my weeds are not as photogenic as yours.

Thank you for visiting me.

Bare earth draws weeds like a moth to a flame. At least annual ones can be hoed - its the perennial ones that are really annoying, especially the ones that grow back from any tiny bit that has been missed. The weeds always win in the end :-)

Thank you for the warm welcome to Blotanical and for your visit to my blog. It may take me awhile, but I'm sure I can navigate.

Weeds, weeds.. we worked yesterday in the veggie garden in an attempt to salvage as much as we could prior to a frost warning.. tomatoes, a few green beans, broccoli and cauliflower... So far so good but the season is about over for us.

What hard work you've put in at your property in London. Good luck in your weeding adventure--the ironing of gardening.

the plant is Mercurialis annua and its everywhere in my garden its a right pain!