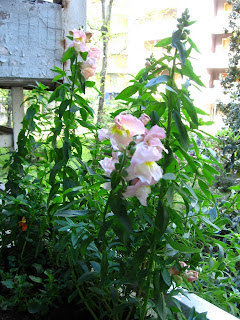 One of the things which I find most misleading about many gardening books, websites and seed packets is the way they class as "annuals" plants which just aren't. Alyssum and antirrhinums for example. If you're very lucky you might see an expression "usually grown as annuals" or which is always a give-away that they're actually perennials, or the more explicit "beautiful annual (strictly perennial) flowers", but there's rarely an explanation and often no indication at all. For the beginner it's confusing, and may well lead to plants being thrown away which would continue to do well the next year if left to their own devices.

The two main reasons given for treating perennials as annuals are usually the fact that they won't survive low winter temperatures, and that they won't flower as well the next year, but neither of these are necessarily true.

Temperature of course depends largely on where you live, and if you have below freezing conditions for most of the winter, well then annuals they probably are. But if you are in a milder or more sheltered spot, wait till spring and see what you manage to bring through. 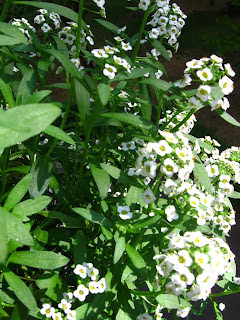 As for getting fewer flowers, I've found quite the opposite. I've got several so called annuals on the balcony which are now into their second or third year and are bigger, stronger and giving more flowers than ever before. Here for example is my "annual" alyssum. As you can see from the stem, it's no young plant. It's certainly in its third, and possibly fourth year. The antirrhinums in the first photo are the same, and are covered with buds. They're going to give far longer, stronger stems of flowers this year than they ever have before. 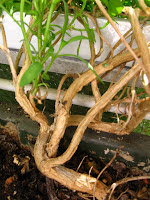 I did cover the alyssum in the coldest parts of the year, as I also did for the marigolds and the surfinias. The marigolds eventually gave up, so maybe they really are annuals, but the surfinias certainly aren't. This year I was misled by a mild spell back in February, uncovered them, and lost them when the temperature suddenly dropped overnight. But last year, the overwintered surfinias from the previous year flowered all summer.

Obviously the temperatures here aren't that cold. It rarely drops below about -2° or -3° centigrade, and the balcony provides a sheltered environment where the plants can snuggle against the walls of the house for warmth. But the antirrhinums were uncovered on the edge of the balcony all winter, and were even snowed on with no detrimental effects at all.

Another plant which I'd always seen described on seed packets as an annual (now why would seed producers want you to believe plants are annuals when they're not , I wonder?) is Mirabilis jalapa. So when mine died down over the winter, I didn't think twice about it. But being too lazy to go out and throw it away in the cold, it stayed there till about six weeks ago. And when I emptied the containers I found thick tuberous roots. Not the usual sign of an annual. So I stuck them back in the pot to see what would happen. And lo and behold ..... 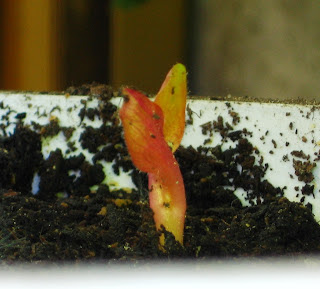 Will I get the same number of flowers this year as last? I'll have to wait and see. If not, I'll go back to treating it as an annual and growing from seed each year. But it's going to be interesting finding out.
So don't give up on plants just because of the description they're given. If you think you can bring them through the winter for a second year, try it. You may end up with a better show than you got the first year.

I find the same thing...snapdragons that last several years, getting bigger and bigger. The alyssum reseeds so easily I'm never sure which is an older plant and which just popped up this year. The mirabilis japonica comes back from the roots and reseeds...I have to be aggressive in pulling them if I don't want to be overrun with them!

I've always been told by gardeners in the area (USA--Midwest, zone 5)that alyssum will reseed itself, but mine has yet to do so. We'll see what happens this year. Another annual that often reseeds for me, popping up in strange places, is the Victoria blue salvia, one of my favorite annuals.

Thanks for the info; I just found your blog through Cheryl's, and I like the way you present your information so clearly--very helpful to a novice gardener like me!

I'm glad that you've noticed the same thing, I'm in zone 9 and our alyssum just thrives and never dies back. It's great.

I think Cosmos and Zinnia's are the only actual annual flowers that I've grown. Everything else seems to flourish.

Actually, snapdragons have overwintered for me here in US Zone 6 as well! I keep thinking that I need to try them again, so thanks for reminding me.

Alyssum is a self-seeder here, but very lovely. You're right, though, you never know what you might get to overwinter. Just keep in mind that if you plant lemongrass where you have harvested your garlic, that may not be your lemongrass sprouting up the next spring. (At l east in my garden, lol.)