The good news, the bad news, the bad news and the good news.
I've got a day off from work (good news), it's bucketing with rain (bad news), and my back has packed in (very bad news). It's been grumbling for a while, and carrying a load of containers downstairs yesterday to get rid of the old soil just about finished it off. So all the gardening I'd intended to do today is on hold (result of the two bits of bad news). 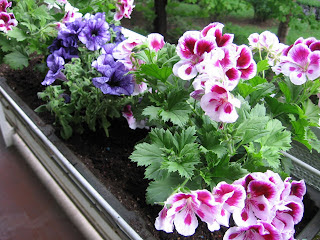 But as I had some free time, I decided to follow up a message that VP had sent me (thank you VP) saying that The Balcony Garden had been featured in the British newspaper The Independent, (good news). I'd managed to get hold of a print version on Saturday but found nothing, and a quick look at the online version didn't turn up anything either. But today I sat down to do a more thorough search. And found this post in one of the blogs in their Indyblogs section, focusing on Gardeners' Bloom Day, and mentioning some of the blogs which had participated this month.

I'm not surprised that Bloom Day has been noticed. By now it's become a Garden Bloggers' institution, with over 100 blogs taking part. Well done (and thank you, because it's fun) to Carol for dreaming it up. Thank you too, Carol, for the way you reply to everyone who posts. It must take hours, but is much appreciated. 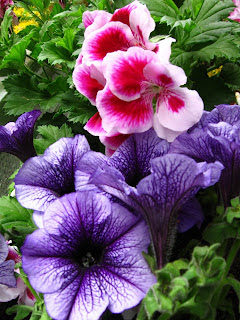 So to celebrate, and to try and forget the rain and the back pain, here are some shots that I could have published for GBD this month, but didn't. I've said before that colour combinations aren't my strong point, but I rather like this one. Or did, as I have to admit that the petunia in the middle has died. Not sure why - I suspect because of the sudden drop in temperatures that we had just after I'd bought it at the Easter Monday flower market (which I blogged about last year.) Odd though, because some others that I got at the same time are doing fine. I've been scouring the garden centres for another one which is just the same shade of purple, but of course haven't found one. Oh well, back to the colour wheel ...

Oh, Sue, I am so sorry about your back. I have that problem, too, but you are too young for that to start already.

Yes, that is a very pretty color combo. I hope you are able to find the purple one again. Those two colors surely do pop out together.

I have learned that sometimes in one strain of plant, different colors have different vigor. When I bought my 4 butterfly bushes, the clerk told me the dark one was not as hardy. She was correct. It lasted only that summer and didn't come back the next spring. Over the years the white one and the lavender one died out. Now all I have is pink.

Ho ho Barbee - not so young I'm afraid. But I have a slightly deformed spine, and 50 years of falling off horses hasn't improved it much!

So sorry to hear about your back Sue and hope you feel better soon.

I love that deep purple and pink combination of the petunias.

Enjoyed visiting your blog. Really like all the rich plant colors. Will check back from time to time. Hope your poor back is feeling better.

Sue, It is very nice to see bloom day mentioned in newspaper blogs! I was very thrilled by it. I have to thank everyone who posts each month. Without other gardeners participating, it wouldn't be much fun and much of an event.

Sorry to read about your rain and especially your back. I'm sure gardening on a balcony is challenging, to carry all the pots and potting soil to the balcony sounds like a lot of work! Just goes to show what we gardeners will do to have some flowers and plants in our lives.

Ouch! Nothing like a bad back for pain. Mine came not from falling off horses (I have an agreement with my horse about that) but from picking up a pig without bending my knees, when I was working on a farm in my early twenties. Heal quickly and well, Sue!

Ugh... I hate to hear about your back, Sue. Is this something (hopefully) that rest and relaxation will help? I sure hope so.

Pink and purple is my favorite color combination in the garden; your petunias are beautiful.
I hope your back is feeling better soon.

I hope your back soon settles down, Sue. I, too, have back trouble -- repetitive strain injury from my days as a Paramedic -- so I feel your pain. Your posies are wonderful, though! And it's great that GBBD received some accolades -- I hope to participate next month. :)

Sue, I hope you're *back* to normal again soon too! And do you know what type of geranium (er... Pelargonium) that is? We have a tag-less one in the greenhouse with similar leaves and deep deep burgundy flowers...

Hello Sue, I hope your back is feeling better soon. we all tend to over do it and end up straining something. I was reading your post about the Parakeets in London, I can't ever remember seeing anything quite so exotic during my years in England, but then I came from the Midlands and a bit cooler than the south of England. You must be getting that wonderful Spring feeling by now. Your flowers are beautiful. Thanks for dropping by, I've left a link on your snake question. Happy gardening !

I am still wondering who this Nick Knight is :-)