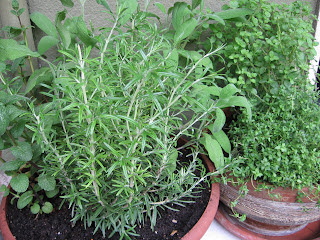 For me, balcony gardening has always meant flower gardening. And even though each year I have a vision of a non-stop supply of fresh vegetables issuing cornucopiacally from the containers, so far it’s never happened. The nearest I’ve ever got was a feeble attempt at tomatoes, but as I didn’t pinch them out or pollinate by hand they went straggly on me, gave no fruit and in the end succumbed to red spider mite. I did once produce a half grown melon, but I’d planted too late and winter arrived before it was fully grown or ripened.

This year though is going to be different. Back in February I stocked up on seeds, and started buying herbs, and the balcony kitchen garden is now well under way. As I can get herbs from the supermarket at €1 a pot, and needed them immediately to cook with, I stocked up with rosemary, mint, oregano and thyme – all of which have taken well and doubled in size since I got them, despite constant clipping. I also sowed two different types of basil back at the end of last month, but so far have seen nothing. Although we can usually expect temperatures of around 20°C (68°F) in April, the last three weeks have been filthy – cold grey and rainy. The temperature has been averaging around 6° -12°C (43°-54°F), and sometimes lower, so it’s been too cold. There’s no sign of a change at the moment, but presumably it can’t go on for ever ...

But many of the seeds have started to sprout and things like the courgettes and dwarf beans will be transferred to permanent containers this weekend. I hadn’t got round to buying the new containers and potting compost when I wanted to get the seeds in, so I started them off in seed pots. They’ve just sprouted and I’m presuming they’ll transfer. The lettuce is coming on well too. It’s a type with long thin leaves - I shall let it grow as a mass then start thinning out when they become big enough to eat.

And as you can see from the photo, the sweet corn is also coming through. Sweet corn. Yes – maize. You know, that 8 foot high stuff. On the balcony. And I was complaining about lack of space? 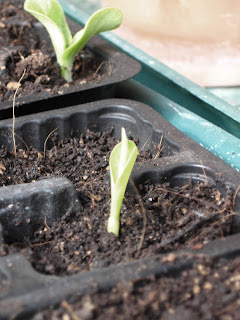 I hasten to say that it was not my idea. When my son saw that I’d pulled out a load of vegetable seed packets, he showed just a tiny flicker of enthusiasm for the idea of gardening. Keen to fan the flame, I suggested that he might like to grow something himself. And then added the fatal words : Choose anything you like.

Two seconds later he was rifling through the hamster’s food box and pulling out four kernels of sweet corn. So there we are, sweet corn on the balcony. Oh, and he threw in a few sunflower seeds for good measure.

I'm late with my tomatoes, but I shall be trying again. I’d intended to get some seeds started in the house as far back as January, but never got round to it. The garden centre have promised they’ll have tomato plants in by this weekend, so I shall nip round and buy some. Perhaps I should go for the dwarf varieties. I suspect I’ve already got more than my fair share of large stuff ....
Posted by Sue Swift at 10:05 am

LOL! That's how I've ended up with 23 Jack O'Lantern pumpkin seedlings for my nephew! They've all come up and I've been giving them to him to give to his friends. I have no idea what I'll do with them once they need to go in the ground and I'm pretty sure I started them too early so they'll be monsters when they're ready.

I think it's cool that you're trying to grow corn on your balcony. I'm looking forward to seeing how it grows!

I know this displays my ignorance - but what is a 'Materials Writer' ?

Esther Montgomery
ESTHER IN THE GARDEN

Well, Sue, corn looks cool growing even if you don't get ears. On a balcony in Austin the raccoons would find their way up to trash the corn patch, but I don't think you have to worry about that in Milan ;-]

I'm always interested in what you're growing on your balcony as that's my garden for the moment, too. Good luck with the corn!

Sue - got a few minutes to play? This "tag" is fun. Click over to my website for the rules of the game.

Sue Swift said...
This comment has been removed by the author.
11:09 am

Kathy - Yes, it's not the first time for me either to find myself growing things I'd not usually have chosen. I forgot to say that we also have a soya bean plant on the way ...
Annie - you're right, but oh how I wish it was a problem. I would love to have the deer, rabbits racoons and all the other wildlife that everyone else moans about.
Nancy - I've come to the conclusion that you can grow just about anything on the balcony as long as the balcony itself will support the size and weight of the containers.
Billy - Will do. Soon
Esther - not a silly question at all. My fault - when you're involved in a field you forget that other people don't necessarily recognise the jargon. I write teaching materials for English as a foreign language courses : testbooks, video scripts, CD Rom and on-line courses, that sort of thing.

Awww... how cute. I know why you're groaning about the sweet corn, but I also know why you had to go along with it. :)

And your herbs, in the meantime, look wonderful!