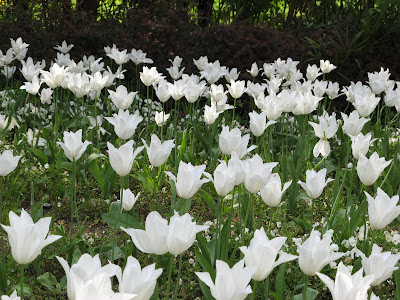 We're on the last day of a long weekend here in Italy. Friday was a Bank Holiday, and for the first time this month we've had a whole three days without rain. And it's been warm and sunny. So yesterday we decided to go out for the day - along it seemed with most of the rest of Europe, but that's another story.
We went to Lake Garda, where there's a huge theme park called Gardaland. Not my idea - I'll leave you to guess who chose the destination - and I spent most of the time wandering around looking at the flower beds while the other two went on the most hideously scary rides (they did get me on one, but that too is another story). And my compliments to their head gardener. There were some superb displays, including beds with thousands and thousands of pansies. Simple but absolutely stupendous.

What caught my eye though were the shrub borders and a couple of beds where the theme was bright green and white, like the bed of tulips above. Unfortunately the shrubs weren't labelled. I think I've got them right, but correct me if you think not. 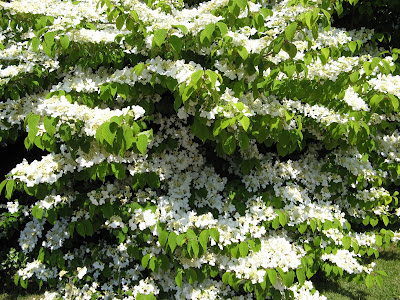 Viburnum plicatum (above and first picture below) 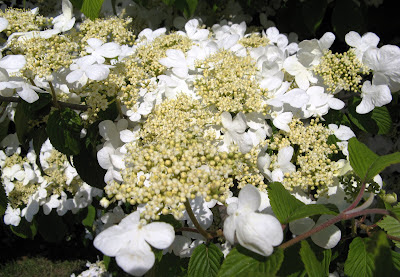 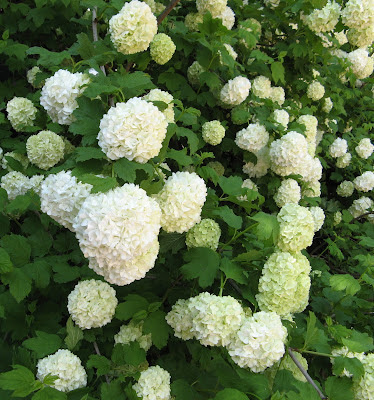 Viburnum opulus (immediately above and below) 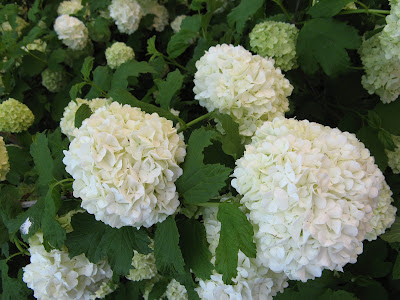 Hawthorn, or "May" as it used to be called when I was a child. Still is, maybe? 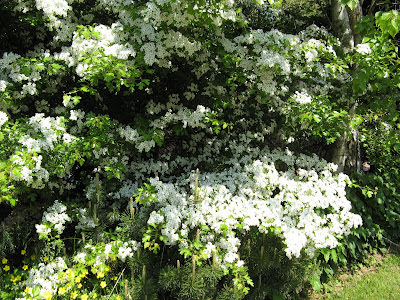 The way green areas had been built into the park surprised me, as did the care that had obviously gone into the planning and care of the plants. I hadn't been expecting anything of the sort. There was even a rare and endangered tree, carefully protected from the visiting hordes. But I'll post about that another time.

Labels: Colours, Off the Balcony

so simple, so beautiful Sue. Glad you were up to a day out and gave the really scary rides a miss.ihwbosxffrxp

The plants look lovely and fresh, I think spring is the best time for white flowers

Beautiful photos. I never think to plant many white flowers, but they are so pure and stunning when planted like this.

My mother-in-law had, what we called, the snow ball bush.
The white blooms look so fresh and pretty.

Like Robin,I remember what we called a snowball bush...we had one when I was growing up in Ohio...I never knew what it really was since I mostly remembered the name, not what it looked like other than the "balls". Thanks for the info!

Oh oh, all those white flowers look so lovely. Heavenly!