Yesterday was the day I became famous ... I think. I got home at about midday and checked the blog. There were a few messages to post, and then I thought I'd have a look at my statistics. They were well over what I'd normally expect for the whole day. Odd. Monday's usually a good day, but not that good.
So I had a look at the Referring URLs section, which tells me which other sites people are coming from. And to my surprise, a large number were coming from the online version of the Wall Street Journal. Yes, I know it's April Fool's Day, but I'm serious.
Needless to say, I followed the link and found it led to an article headed Blog Watch, which focused on garden blogging. And that's where the frustration set in, because only the first paragraph of the article was shown. The rest was available only to subscribers.
Frantic E-mails to family and friends didn't turn up anyone who had a subscription, or who had a copy of the print version to see if it appeared there too. But the hits keep growing. I estimate that in the last thirty hours I've had about five to six times the traffic I'd normally expect.
The article featured an interview with a blogger called Billy Goodnick, who's based in California and writes Garden Wise Guy. I'd not heard of him before, but found the blog easily through Google. I've left a message for him, so I hope the mystery will get cleared up.
Did anyone else notice a jump in their stats yesterday? I doubt if it was only my blog that got mentioned. Or did anyone see the article and know what it said and who it focused on?
Andy Warhol famously said that everyone achieves fame for fifteen minutes sometime in their life. Mine seems to have lasted a bit longer. I'm glad I noticed ...
PS. For those of you who read my post about my ailing mandevilla yesterday (which wasn't picked up by Blotanical incidentally - anyone else having the same problem?), here's what it used to look like before the problems set in. 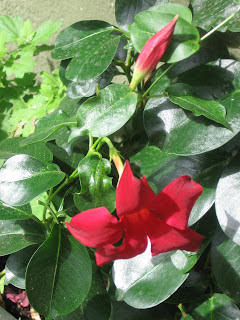 PPS. My strange vegetable of three posts back has been identified by Cory. The usual name is puntarelle. Spigoli ( which means much the same) must be the local name. If anyone wants to find out more or see recipes, just Google it.

Labels: On Blogging, Other Sites

A few of my posts had been picked up and then dropped yesterday, but Stuart cleared up the mystery for me -- apparently they had had some trouble picking up certain feeds yesterday, but it all seems to be straightened out now. :) Your plant is lovely -- what a brilliant color!

Re: Mandevilla
Has it been receiving more water than usual? I have had this problem a couple of times when I have it in a container with other plants that need more water. Trying to meet the needs of the other plants resulted in too much water for the Mandevilla.

Newsday.com's Garden Detective added my blog to their blogroll and I've seen my numbers almost double - but we're talking small numbers here. I now get 45 visitors a day, as opposed to 20. Here's the Garden Detective's URL:
http://my4.statcounter.com/project/standard/camefrom_activity.php?project_id=3344611

I was blown away when MSN Network's City Guide did a short blurb on Garden Walk Buffalo as part of a post titled "Hidden Gardens in the City" (thank you Amy Stewart for the lead). The day they posted it, visits to the Garden Walk Buffalo website went from 60, on a typical March day, to more than 11,000! The power of the internet baby!
Here's the URL for the MSN article:
http://cityguides.msn.com/citylife/article.aspx?cp-documentid=6428129&page=2

Good post, I will check and see if Mine went up.

Congratulation! I hope you recieve several steady readers from this.

The mandevilla may have fungus infection around the roots. If it's possible you could try to change its soil.

I did notice a huge increase in stats and figured they had gone askew. I looked at the links and really couldn't find any info there. Very interesting!

I'm a subscriber of wall street journal and i came here after reading about your blog on Wall street journal (print) of March 31st 2008. Your blog along with the Garden Wise Guy and another one - theherbgardener.blogspot.com is featured in their "blog watch" section and this time, they were writing about "Garden blogs".

Sue...there is an award for you over at Growing a garden in Davis...

Hi. Just drop by to say Hello and I really like your blog. Love all the beautiful plants. Reminds me of my mum and her huge garden. Maybe next time I will blog a bit about my mum's garden too. She is a home maker and professional gardener.

Garden Wise Guy said...
This comment has been removed by a blog administrator.
1:41 am