When is an Aloe not an Aloe? When it's an American Aloe, or Agave.
Agaves and Aloes certainly look similar, but despite the fact that Agave americana is often called by the misleading name of American Aloe, the two plants are not actually closely related. The agaves are native to Mexico and the southern states of the US and come from the Agavaceae family, while the Aloes are African in origin and part of the family Asphodelaceae. 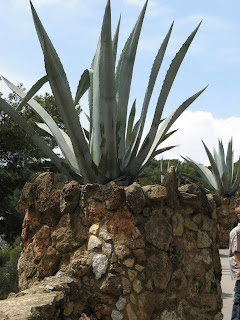 Why am I bothered? In my last post I described a plant which I'd seen in Barcelona as an aloe, but in a comment, Blackswamp Girl referred to it as an agave. Which got me wondering if I was right.
After looking at lots of pictures on the net, I think I am. But I can see why the confusion arises. There are agaves which look very similar to this, and aloes which are quite different.
What does anyone else think?

I'm no expert on either, that's for sure, but it does look like an aloe. Then again, I haven't seen that many agaves. Big help, eh? ;)

I've always been confused too Sue. I must look into this a bit further for my gardening course - thanks for reminding me!

This is a brain twister Sue .. we don't have those huge ones growing here .. I do have a couple of typical aloe plants in my kitchen .. but wow ! those ones are BIG ! haha
Joy

This certainly looks like the plant in my garden which I thought was aloe vera - and like pictures of aloe vera on the web. But it is confusing because I've heard the bigger ones, with similar leaves, called agave - these are up to a couple of metres high.