Open any book on container gardening, and you'll soon come across a stern admonition about always adding a layer of old crocks to the bottom of your containers to assist drainage. If not, the received wisdom goes, the drainage holes in the container will get blocked by soil, the soil itself will get waterlogged and your plants will die.
Sounds logical. So why is it, I always wondered, that whenever I get plants from the garden centre there is never, but never a layer of drainage material. There may be perlite of sand or something mixed into the potting compost, but at the base nothing. And yet the plants are healthy, happy and show no sign of being waterlogged at all.
So I was intrigued to find this article in the Horticultural Myths section of Linda Chalker-Scott's website. Chalker-Scott, who is an Associate Professor of Horticulture at Washington State University, argues that far from aiding drainage, the broken potsherds, gravel etc usually used will actually prevent it, and leave the soil more rather than less waterlogged.
According to Chalker-Scott this has been proved by a number of studies. Annoyingly she doesn't provide references, so there's no way of checking. But I thought it would be fun to try an experiment and see what happened. 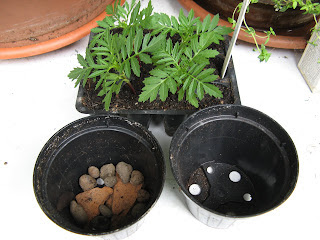 So today we have the great Balcony Garden Drainage Material Experiment. No claims to being scientific, but here's how it goes. Two identical 10cm pots, one with old crocks and large clay granules in the base, the other without. Both are then filled with the same potting compost, and the same amount of water is added - enough to more than waterlog the soil. 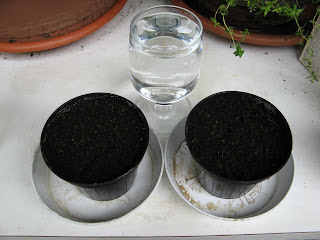 The liquid that drains off immediately and after half an hour is measured and, lo and behold is exactly the same. 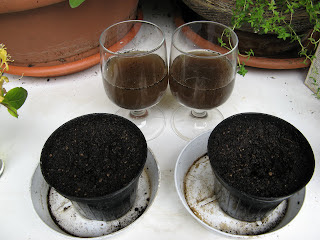 However, as the whole point is to see how this affects the plants growing in the pots, there's a second stage. Two marigold plants, as nearly as possible identical, are added - one in each pot. I've called them Bill and Ben. Bill is in the pot with crocks and Ben in the pot with no crocks. Over the next few weeks they'll be kept in the same position, receive an equal (though generous) amount of water, and be treated in every way identically. And we'll see what happens. 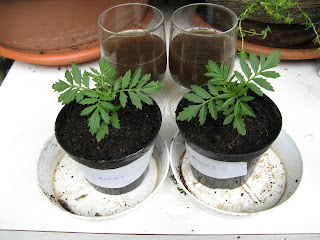 Who'll grow strongest? Will it be Bill or will it be Ben?

I have wondered about this as well. This year I am trying plastic bottle tops instead of crocks. I never have enough crocks and the recycling people are funny about the bottle tops so ha ho I thought I would give it a go

A very interesting experiment, Sue -- I'll be anxious to 'see how your garden grows'. :)

I like this experiment Sue - can't wait to see how it turns out.

I do use polystyrene instead of crocks in my larger pots so that they're easier to move around...

Hi everyone,
Like VP I've tried polystryrene too - in big chunks so that I could take it out before I threw the soil away. I'd never thought of bottle tops Helen, but why not?
As an update 6 days on, Bill and Ben are both well and happy despite the fact that I'd added so much water to the pots I haven't had to touch them since. But they've grown visibly, and are now each putting out buds.

I mix the crocks with broken bits of polystryrene. I read that the polystryrene in pots over winter helps prevent them cracking with the cold temps too.

Have a great weekend :-D

Wow... I can't wait to see the results of this experiment. How funny that the first amounts of runoff are exactly the same.

I really look forward to the results of this experiment, Sue. I grow a lot in pots around the pergola and patio so that I can move them around when the sun gets too hot. Some have vermiculite in for added drainage and they thrive well.

Some of my plants like to be watered from the bottom and I think gravel in the bottom of the pots blocks water access. Trial and error, all the time.

I love that! I love doing experiments, I love questioning the common 'wisdom'. I love learning.

Thanks for the great post. I to have no garden, but grow in my balconies in Egypt.

I'd love to see how Bill and Ben grow!

Hi Sue,
Well, I'm really curious about this. My newly discovered passion for gardening has recently been extended to potted plants in the house. I actually broke up some old pots to have something to put at the bottom of the new ones. Am I about to discover it was a waste of time...?
All the best, Howard

I love experiments. Doesn't the crockery have to be positioned over the hole in such a way that it doesn't block the hole but enables water to drain?

The problem I have with crocks is that when I repot a plant the roots have usually enveloped the crockery and I have to dig it all out. (Perhaps I should be repotting more often.)

what are old crocks for container gardening.i trully havnt heard of this before.

Intersting,.. main reasons I add rubble to the bottoms of pots is that it is cheaper than good soil and it tends to help keep the pots from blowing over,. esp. the plastic ones.