It finally stopped raining this weekend and, very briefly, the sun came out. So we headed to the Parco Nord, a large park on the outskirts of Milan for a long walk.
The park covers 1,500 acres and is a strange mixture of cultivated bits, and natural areas - woodland and agricultural land. It's not a flower-bed type of park, but there are a lot of flowering trees and shrubs. We came across an area full of philadelphus - would have looked spectacular a few weeks back but it was all over now. I was hoping that the lavender bushes would be in bloom, but they weren't quite ready. 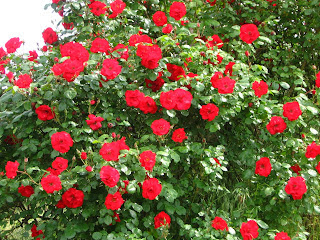 There were however some rose bushes which were in full bloom and looked wonderful.
After all the torrential rain we've had, and the sudden sun, the humidity was sky high and at times we felt we were walking through a rainforest. So it was barely a surprise to come across a number of dinosaur nests - about seven in all scattered around the grassier areas of the park. 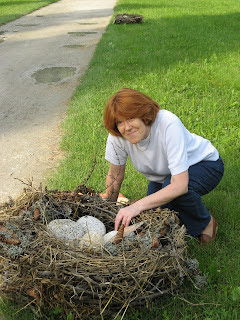 There's quite a lot of wildlife in the park - I've posted about it before - but I always thought it was confined to birds, a few mammals and some smaller reptiles. But these eggs were clearly on a different scale. Diplodocus maybe? Or triceratops? Surely the local authorities wouldn't allow raptors to nest in a public park?

There was no sign of the parents - probably hiding in the depths of the woods. Maybe dinosaurs don't look after their nests too much. 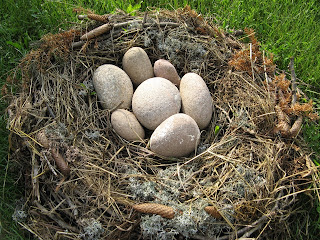 I wonder how long they'll take to hatch? I'll have to go back soon and see if I can get a photo of the babies. Now I bet that would push my hits up ....

Labels: Off the Balcony, Parco Nord

I hope they don't have to sit on those eggs to hatch them, poor things! Looks like you had a lovely day.

Do you think they'll hatch into fossils perhaps?

The eggs look cute; i hope their parents are the herbivorous variety!
Please keep us posted on the developments on that front:-)

I like mine sunny side up please! ;-)
Are you sure that park isn't called Jurassic Park?

I'm glad you finally got a break from the rain. Those nests are quite a fun surprise.

I love the nest! What a cute idea.

Many a great discovery from a simple walk in the park. I hope the dinosaurs have little beaks to peck their way out, those eggs look hard-shelled.

I love the dinosaur eggs. They'd be perfect in my garden, only where do you get the nest? Build it and they will come? It's nice when the sun comes out--it was out here for awhile today.

Nancy - if I were a baby dino in an egg, I'm not sure that I'd want my parents to sit on me ....
VP - you sound like one of these doubting souls who are convinced dinosaurs are extinct. They're not - just shy.
Green Thumb - as we were walking through the park, we were hoping they were herbivorous too ...
Yolanda Elizabet - I did hear there was a move afoot to rename the place ...
MMD - And you complain a bout rabbits. Imagine having a couple of these trampling over your lettuces.
R+L and GWW - More non-believers I see.
PB - I'm sure nature will have provided.
FP - don't be silly. The dinosaurs build it themselves. Just leave some twigs lying around for them.

Everybody - there have been developments. Stay tuned!