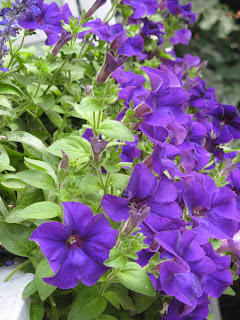 I have a sneaky weakness for petunias and surfinias. They must be the only real rival to pelargoniums for the title of the ultimate balcony plant. Stick 'em in a container, give them the right amount of tender loving care and they'll grow, and bloom, and grow and bloom all summer.

This year though, I have to admit that I've gone a bit over the top. It all started back in April when I saw that petunias had started to come back into the garden centres, and immediately started buying. I hadn't seen ordinary petunias for a couple of years, as surfinias had become so poular here that they'd pushed them right out of the garden centres. This year, I thought, I'd go for petunias, just for a change.

But then the surfinias started appearing too, and I couldn't resist. Especially when I saw this yellow one which did so well for me a couple of years back. So I now have far more than I ever intended. And guess what - I don't care a bit. 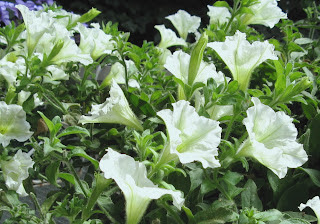 Surfinias are a Japanese invention. Back in the mid-1990s two Japanese companies - Suntory (better known for whisky) and Kirin (better known for beer) - each developed a variety of trailing petunia. Suntory's was known as surfinia and was propagated from cuttings, while Kirin's was propagated from seed and went under the name of Wave petunias. They became immensely popular, to the detriment of the upright varieties, but now, if our local market is anything to go by, ordinary petunias seem to be making a come-back. 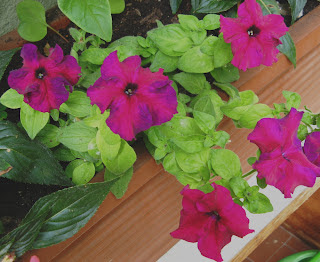 An enormous number of new varieties of petunia (of whatever type) are produced each year - anything up to a thousand - so don't be surprised if you've never seen exactly the ones I have here. They're sun-lovers, and extremely thirsty - when it's really hot you'll need to water them a couple of times a day. But they're fairly resistant. When they get thirsty they flop immediately and look exceptionally pathetic. But a drink soon puts them back on their feet. 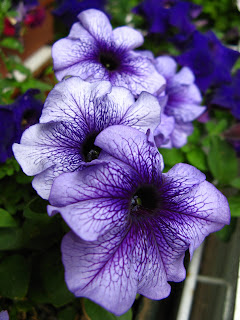 They also get fairly hungry and need regular feeding with a high potassium but low phosphorus fertiliser. They also dislike alkaline conditions and prefer an acidic compost.
If they have a disadvantage, it's that they need constant dead-heading. They bloom copiously, but the blooms don't last long. And they're sticky- yerk.

But they're so lovely it's worth it. Bloom on, babies.

I love the purple and white petunia. Aren't their choice of colors fantastic?

Sue, you've been tagged for a meme. Please stop by my blog for details.

I like petunias--you can really count on them. They do require a lot of deadheading though to look their best, don't they? You obviously do a LOT of deadheading.

I planted a lot of petunias this year and I particularly like the Supertunia from Proven Winners. They really don't bloom for long. Sometimes the bloom last only a day. The petunias sure keep me on my toes with deadheading. They are beautiful flowers.

Hi Sue,
I enjoy visiting your website a lot. Thanks for sharing...

I would like to ask you a question about petunias. 2 years ago ı have started to grow petunias in my balcony. I though all of the petunias dangle but last year I bought petunias and all of them grew up upright.

So, how I will know if my petunias are suitable for hanging baskets.

Thank you very much...

Derva - Glad you like the blog! In answer to your question : petunias are fairly small, compact and upright. They're the original plant. The types which trail have been bred more recently are the surfinias or "wave" petunias. They're the ones you want for your hanging baskets. I've had most success with surfinias and would recommend them.

Hi Anonymous,
Yes, that's right. A horrible sticky job but one which is necessary if you want the flowers to keep coming. A plant makes flowers in order to produce seeds and reproduce itself. Once it's done that, it breathes a sigh of relief, thinks its job's done and stops flowering. If you don't let the seeds form, it keeps flowering to try and produce more.