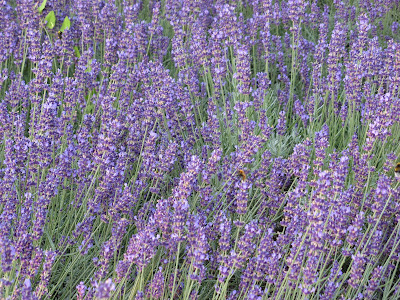 Lavender's blue, dilly dilly ... No it isn't. Or at least it can be. But it can also be white. Or yellow. Or pink. Or even lavender. 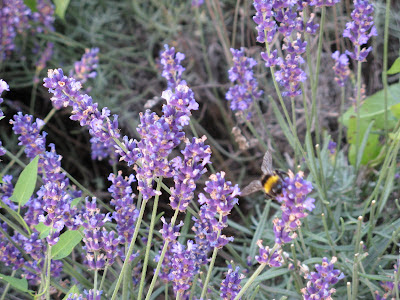 I came across this lot yesterday when we took a walk in the park to enjoy the longest evening of the year. The temperatures had suddenly shot up - we went from 13°C last Saturday to 31°C this - a ridiculous difference which left us all gasping for air like beached goldfish. So it was a relief to get out in the evening when the sun went down and a slight breeze picked up.

In the park, the lavender was in full bloom and the bees had clearly decided to work the nightshift to make the most of it. There were loads of them, all of different kinds - encouraging given all the recent tales of colony collapse disorder. I tried to convince a few of them to stay still long enough for me to get a close up, but they weren't having any and I came home with about thirty photos of a purple blur with a brown and yellow blob somewhere in the middle. 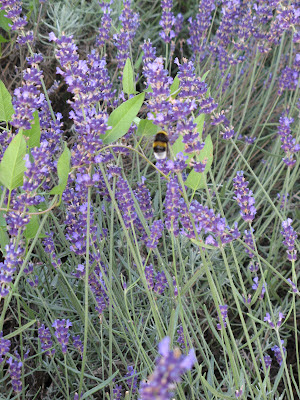 But it was glorious, and so was the smell. Lavender looks best in a mass, which is why I've always shied away from having it on the balcony. But I'm starting to wonder whether next year it wouldn't be worth dedicating one of the larger containers to it.

Lavender likes a moderately poor and well-drained soil - too much water will result in root rot. It's originally a Mediterranean plant and loves the sun, but many varieties are hardy in much cooler temperatures - like Britain for instance. It was introduced to Britain by the Romans, who used it to perfume their baths - hence the name, which derives from the Latin lavare, meaning to wash. 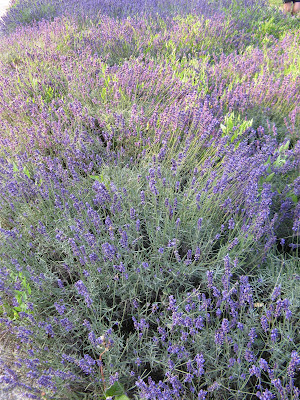 And if this has started you thinking, like me, that maybe you do have room for a lavender bush somewhere, just find a friendly neighbour who already has some. It's propagated easily by cuttings, taken at the end of the summer. Check out this article from the RHS site which explains how.

Labels: Off the Balcony, Parco Nord

Wow what wonderful amounts of lavender. I had planted some Lavender Hidcote seeds a while back but sadly lost them when on vacation. I would love to have some lavender if I knew of anyone that had some. I think I'll go sow some more seeds and see if I can still get some even if it is late.

Very beautiful. Too bad it does not grow well here. Thanks for letting me enjoy your pictures.

Gorgeous! I love the soothing smell of lavender, especially in or after a long, warm bath. :)

Thank you for this post - if only computers were equipped with scratch and sniff! Lavender is my all time fave and I'd love nothing better than a whole garden full (which is what I'm working on at home). I say definitely try some in containers - L. stoechas might be drape-y and pretty in a pot.

I just planted my own garden on my balcony and I LOVE it! I have tomatoes, basil, mint and some other spices.. and it really does change everything.. including the mood.

Lavender is nice, though have not gotten that yet.

I have 1 Lavender plant. It doesn't bloom as it's in too much shade, but I have to have it as I love to run my fingers through it every time I pass it. What a glorious fragrance.