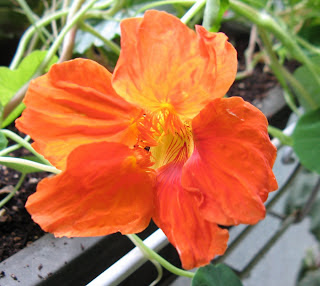 Wow, are we late this year. I've just checked back to last year's June GBD post and the first photo was plumbago in full bloom. But today, although it's healthy and green,there's not a bud in sight. Hardly surprising when the temperature outside is 16°C (61°F) at 3pm and it's been raining almost uninterruptedly for the last ten weeks. They say it's all due to La Nina, but whatever it is, it's playing havoc on the balcony, with everything doing well but weeks behind schedule. We harvested the first japanese loquats from the trees in the condominium garden around about May 20 last year too, and they were delicious. This year they finally ripened this week and were completely insipid.

I didn't record temperatures last year and now wish I had. But I remember that we were already complaining about the heat and humidity. Today I'm sitting here in a woolly jumper. I don't remember that ever happening - according to the BBC's average temperatures it should be anywhere between 27-35° C (81-95°C). There are advantages of course - the main one being that I'm not complaining about the heat and humidity. But there have been noticeably fewer pests this year. Not only has red spider mite been far less of a problem, but whereas this time last year the caterpillarium was already in full swing, this year I've hardly noticed any caterpillars at all (not that that's necessarily a good thing - it also means no butterflies). 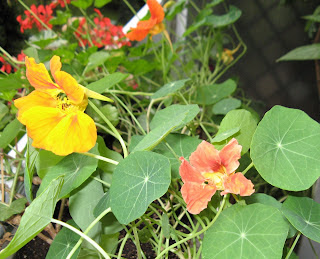 When I realised that Gardener's Bloom Day had come around again, I panicked. Apart from plants like pelargoniums and surfinia which I've amply blogged about recently, there's nothing at all impressive in bloom. Or so I thought - then I went out and found that the nasturtiums had bloomed overnight. never mind that they were in May's post last year. This year they're my flower for June.
Nasturtiums like sun - which explains why they're so late this year. They are originally from South America and give the most flowers if they're planted in poor soil - very poor soil. Monty Don suggests planting them in the dust you sweep up from the garden path - check out the video link on this page from the BBC to see why.
Apart from the great flowers they give, they're also edible - add the young leaves to salads for a peppery taste a bit like rocket, or use the young seeds as a substitute for capers. The leaves are also good for you as they contain Vitamin C and iron. But if you want to grow them specifically for food, plant in rich soil - you won't get so many flowers but you'll have a lot more leaves. For a salad recipe see here, or here you'll find a recipe which uses the flowers. 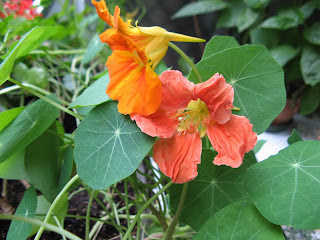 They also have antiseptic properties, and you can make a tisane out of the flowers and leaves which is supposed to be useful against bronchitis.

So, you are late and we are early. The climate is so unreliable, these days....
I've grown two different types of nasturtium this year - one apricot and one burgundy - but they are not in bloom yet.
Happy Garden Bloom Day! /Katarina

Nice! Although I'm not big on orange flowers your's have a nice tint to them...and I do like nasturtiums! I haven't tried eating any...maybe I'll get a pack of seeds...

I love Nasturtiums for many reasons...they are non exacting and quite hardy and apart from blooming successively for many months in the season, they reward by returning the next year by reseeding.
Your orange Nasturtiums look very nice!
Best Wishes

Timely post for me as I am growing some nasturtium for the first time in years. I put them in my vegetable garden, as I read some place that the peppery taste keeps the rabbits away. So far so good, and the blooms are nice, too.

Thanks for joining in for bloom day!
Carol, May Dreams Gardens

My nasturtiums are still unplanted..but I'll get there eventually! Aren't they lovely bright spots of color? I especially enjoyed mine last fall. Thanks for the interesting info you've shared about them.
You've certainly had your share of rain and cool temps. I smiled at your use of the word 'jumper'. I wore jumpers in Australia. Here I wear 'sweaters', and not many people use the word 'cardigan' :) Do you use that term?
What treatment did you use against the spider mites, and was it successful? I'm wondering if that's what causing my impatiens trouble (they don't grow..just turn yellow and eventually die. This has happened for the past 2 summers.
What a pity the loquats were insipid.
I hope you get some warmth and sunshine soon!

Your weather has been cool, ours has been rainy, although we've had postcard perfect weather since Saturday. Nasturtiums are such fun annuals. I love the shape of both the leaf & the flower. I haven't grown any for a few years, & I really don't know why. They are so easy & undemanding.

Katarina - I'll obviously have to leave Italy and move to Sweden for some sunshine!
Leslie - I've gone a bit overboard on orange this year. It's one of my favourites, along with purple ...
Green Thumb and MM's D - I wouldn't be without them although in containers it can be difficult to balance their need for no feeding with those of the other plants.
Kerri - what was it Mark Twain said about Britain and the US being two nations divided by a common language? And of course I wear cardies ...
If you've got RSM you should be able to see them on the underside of the leaves. They're small but visible. I pull off the really badly affected leaves, wash down the others and then spray - hoping that way to keep the spraying to a minimum.

I was actually waiting for this post. It was super hot here in New York and my nasturtiums weren't blooming yet and the leaves actually got sun burned. They've (mostly) come back and are starting to bloom and I'm really happy with them. And for the record, I have a lot of orange this year too!

I love nasturtiums and planted a new butter yellow variety this year that has double blooms -- I'm looking forward to seeing them bloom.