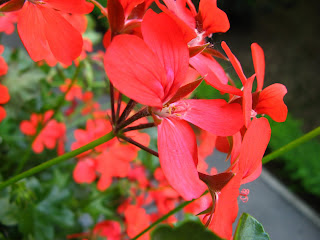 It's Gardener's Bloom Day again, and the balcony is now looking quite different from last month. The pansies have finished rioting, the summer flowering plants have shot up in height, and the hollyhocks and dahlias are covered in buds but not quite there yet. But the flowers which are dominating this month are my pelargoniums. 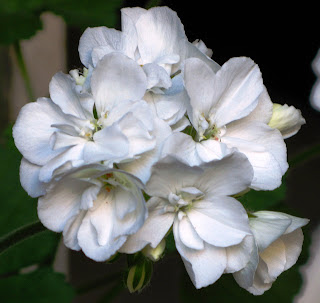 I have a love-hate relationship with pelargoniums. They're as common as muck on balconies, and I always feel that perhaps I should be devoting my time and the balcony space to something a bit more original. But if they're common, there's a reason for it - they look so glorious when they're in full flower. 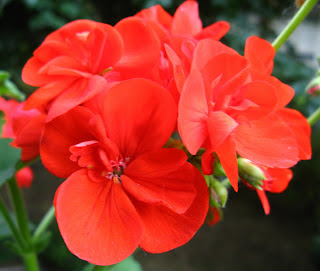 So this year I've succumbed, and the pelargonium collection has grown. I've now got three types - more of the zonal pelargoniums which I've had for years, some new dark pink and white regal pelargoniums, and some ivy-leaved pelargoniums, which I bought last year for the office, transferred here for the winter and never took back.

The ivy leaved pelargoniums were looking pretty tacky at the end of the year, and I had to cut a lot of dead stuff off. But they've sprung back, and now look great from the path outside the house. 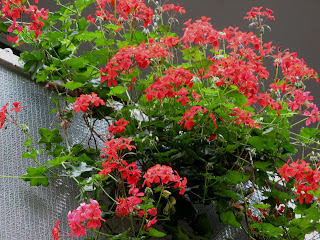 I posted about the regal pelargoniums a while back, and Kris of Blithewold left a comment asking if I knew the variety. Annoyingly, I did but have forgotten. I got them at a big flower market which is held here every year, and they were labelled with the variety name. but I didn't write it down and .... I've been hunting on the Internet ever since I got Kris' comment, but can't find anything which is exactly the same. 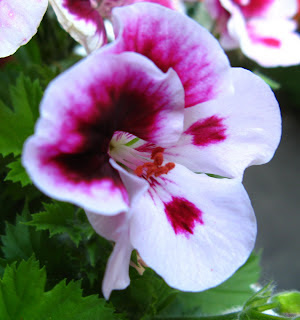 I've now got zonal pelargoniums in three colours. I took a lot of cuttings from a red variety which I had last year, and those are now thriving. My salmon-pink pelargoniums have been flowering non-stop for years - there hasn't been a week when they've not had at least one bloom - and show no sign of giving up. So I've bought two smaller ones with variegated flowers to keep them company in the container and set them off. 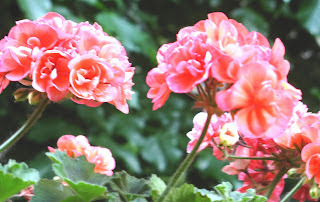 This white pelargonium is another cutting - but I can't for the life of me remember what happened to the mother plant. Anyway, it looks great together with the blue campanula and aubretia in this pot. 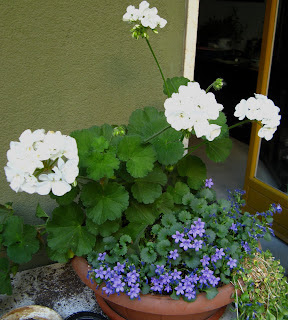 Pelargoniums are native of South Africa, and love the hot, sunny conditions we get on the balcony in summer. They don't like the cold, but over-winter well covered with fleece and placed inside the balcony and near the house, where the temperature stays above freezing. They are fairly resistant to pests and diseases, though caterpillars like to munch away at the leaves. The main pest here in southern Europe are the caterpillars of cacyreus marshalli, also a South African native, which was somehow transported to Europe in the late 80s and is now the bane of any pelargonium lover's life. I wrote this post about it last year. 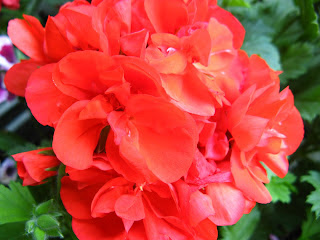 I always get at least one pelargonium for my containers in the spring, just because my Dad was fond of them. You are right, not much bothers them. Even here, the horrible Japanese beetles that eat pretty much any plant, leave them alone.

Yours are beautiful and as you noted, there are good reasons why they are so popular and as common as "muck".

Thanks for showcasing yours for the May bloom day!

Very beautiful all of them. I think many people have them because they are easy to care for. The balcony across the way all they have is geraniums I suppose. No Pelargonium or Geraniums for me. They are pretty but just not my plant of choice for now.

But if they're common, there's a reason for it - they look so glorious when they're in full flower.

I feel the same way about my cheery balcony geraniums. :)

beautiful blooms! Ive been peeking around your patio garden. You have an eye for colour!

Your Pelargoniums are looking good, I can see why you grow them. The zonal ones are my favorite. I usually get one, but I haven't yet this year. At a nursery last week I saw a fantastic chartreuse & green zonal. I almost bought it until I saw one in bloom. The flowers were orange. (I don't like orange.)

Pelargoniums are beautiful (well most of them at least) even if they are so common. I specially love the red flowered ones

I lived in Germany for many years. One of the most beautiful things there are the ivy geraniums growing from ALL balconies. Yes, they are a bit common, but never fade in beauty. Yours are stunning and can rival any over there!