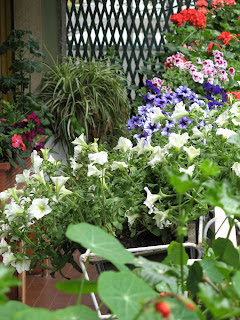 Even if I say it myself, the balcony is starting to look good. I worked hard last weekend pulling out the last of the spring plants - a sad goodbye to my little pansies - and rearranging the containers to emphasise the things which are now at their best. One of the few advantages of balcony gardening is that a lot of the the plants are mobile. Whatever is looking most glorious can always be bang outside your living room window. 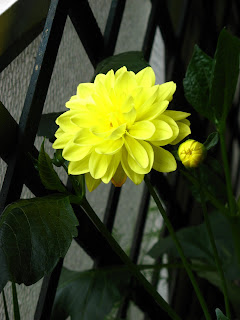 Several things, like the pelargoniums and petunias, have been blooming for a while, and whether they were old plants, new cuttings, or bought this year have settled well and doubled in size. Some of the perennials, like the plumbago and the hollyhocks, aren't yet in bloom, but are growing strongly and their foliage is giving the balcony a lush, "full" look. And in a month or so they're going to be great. The hollyhocks particularly are towering over everything else and are full of buds. And lot of the bulbs, corms and tubers which I put in for the first time are now coming through well. This year's experiment are the dahlias, which because of their size had to go into the "container from hell" - a large container in a particularly shady, but extremely hot spot on the back balcony where very little survives. And yet they're doing wonderfully, and are now coming into flower. Probably because the hot weather hasn't hit yet. They're tall enough to find the light, but aren't yet suffering from heat exhaustion. We'll see what happens later. 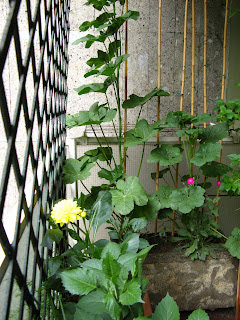 One of my favourite plants is the lychnis which you can just see peeking through the hollyhocks in the picture above. I had several, but the majority, which were in a different pot, suddenly wilted. I suspect they didn't need quite as much water as the other plant which was in there.

Lack of some decent weather has held back the growth of the annuals which I sowed in March and April - the only disappointment so far this year. Yet again this week we've had torrential rain and temperatures well below usual. As I write there's thunder rumbling around, and this morning the bus even had the heating turned on. Things like the marigolds, which would usually be putting out buds by now, are still in their seed pots while the more delicate seedlings - like the surfinia - are still tiny. 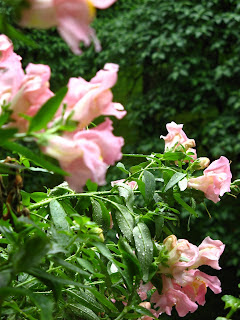 The rain has also knocked down the antirrhinums and made the ivy leaved pelargoniums look a bit straggly, but there are plenty more buds coming through.

I don't like very hot weather, so I'm not desperate for the summer to arrive. But a bit of spring would have been nice ... 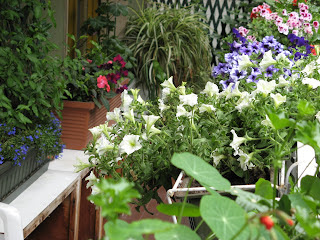 Sue, your balcony looks amazing! The few things I set out are just starting to take hold now, but coming along nicely. Your containers are so colorful. :)

It all looks fresh and inviting, Sue. You are not alone in having strange weather - very wet here last week and temperatures plummeted. We switched the heating back on in the evenings.

Your hollyhocks are much more advanced than ours. It's the first year for them in our garden and I can't wait for them to grow tall and bloom. I keep giving them a good talking to: perhaps that's the problem - they want to be alone!

You have a so many great blooms...I'm trying to visualize how big your balcony must be! We grow dahlias here in full sun, which means very hot, so you may have a winner in your 'pot from hell'!

Your balcony is truely wonderous! I bet your neighbors look in wonder at all you've managed to grow there. I certainly am!

PS: refrigerators are welcomed to the poster... and I'll pass on your appreciation to the artist. She'll be happy to hear it!

Sounds like you've had much the same spring weather as us. After the warm, summery 2 weeks in April we've had lots of cold and quite a bit of damp. But we're having a lovely weekend at last. Hope you are too.
Your balcony garden is looking gorgeous! I'm amazed at what you grow there. You do a beautiful job with it.

Leslie - actually it's not so big, only about 10x1m. There are two of them though, one in the front and one at the back of the house.

Everyone else - thanks for stopping by! And thank you for all the compliments. One of these days though I'll have to come clean and post some photos of what it looks like before the cleaning up starts and i hide all the dead stuff :(