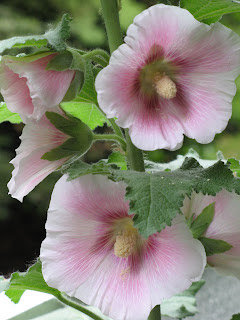 In May something seems to happen every day. Only three days ago I said that my hollyhocks were in bud but not yet blooming, but look at them now.

I've got about seven plants all together, and as they came from some seeds I collected a couple of years ago, I'm not sure what colours I'll get. But that's part of the fun. I love the delicate pale pink of this one.

These are plants which I sowed just under two years ago. I must have put them in too late in the year for them to flower the following summer - they hardly grew at all last year. But this year they just shot up, although some which I transplanted lost a few lower leaves - I think it may have been rust or a watering problem rather than the move itself. But they're now all where I want them, so at the end of the summer I'll leave them where they are and see how they get on as perennials. 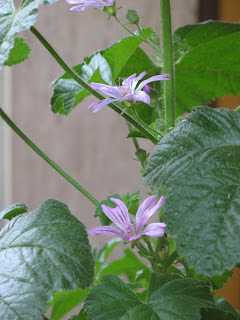 Another plant which is related to the hollyhock (both are part of the malvaceae family) has also just come into bloom - my mallow. It recovered well from the red spider mite attack of a few weeks back and, though it lost a few leaves, is now looking healthy again. The flowers aren't as spectacular as those of the hollyhocks, but they're nice in a delicate sort of way.

The "fight against the mite" is still going on. Although the mallow now seems clear, some of the other plants have been slightly affected. Luckily the weather seems to be on my side - the mites don't like the cold wet conditions we've been having, and that gives me a headstart on them. I've been merciless in ripping off any leaves I've seen affected, and so far things are under control. But it's too soon to feel confident. There's another four months of relentless struggle ahead ...

Your hollyhocks are lovely. I've tried to grow them twice but, being biennials, they usually can't survive our summers.

Hmmm. Maybe I should try again and plant them in the fall.

The photo of your hollyhock is good enough to eat. I'm guessing it would taste like cotton candy. It's great that you collect seed and have the patience to wait. So many people just go for the "fast food" version and buy them already started. No adventure!

That hollyhock is fabulous!

Sue, those hollyhocks are such a gorgeous color. I wouldn't have thought they'd grow well in containers. How neat that they do for you. The mallow is pretty too. I see I have a few seedlings popping up from last year's plants.
I don't know the origin of the Killdeer name. It is a strange one, isn't it? Yes, it's one of the plovers.

Sue, those hollyhocks bring back wonderful memories of my childhood. My aunt had hollyhocks that lined the back of her house -- I always marvelled at their height when I was a kid. The color of your are beautiful.

Sue ... those are the most gorgeous hollyhocks I have seen yet ! I grew some double flowered ones in pink .. then the "Black" one .. but eventually had to get rid of them because of the "rust" problem .. along with the Highbush Cranberry .. some plants just would not stop with the rust.
So I am enjoying your hollyhocks ! Thanks !
Joy

Helen - I think you can grow anything on a balcony really - as long as the container is large enough and the balcony strong enough to take it. So far I've drawn the line at trees ...

mss - I always plant mine in the autumn too. If like us you have a long warm autumn, then it shouldn't be a problem.

gwg - I agree. Buying things ready grown at the garden centre is fine if you just want "exterior decoration", but it's not gardening.

everyone else - thanks for stopping by and I'm glad you like d the hollyhocks. there are plenty more on the way so we'll see what new colours come out. I suspect they'll be my next GBD post!

One Woman's Journey - a journal being written from Woodhaven - her cottage in the woods. said...

I just found your blog.
When I saw Italy
My dream someday
Then I read about your hollyhocks
I am trying to raise them at my new smaller home.
Planted the seeds and have small plants coming up.
I had beautiful ones at my other home and tried to move some of the plants and did not succeed.
I will be back to visit
A gardener from Tennessee.

Hi !
I am also a balcony gardener, and came across your blog by googling "Growing hollyhock in container".

Anyways, yours are beautiful! Congratulations on having blooms.

Your garden is an inspiration . :)