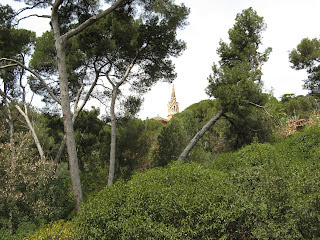 I spent last weekend in Barcelona, where I met up with a friend from Cambridge, whose daughter is at university there under the Erasmus scheme. We had a wonderful time, only slightly marred by the disgusting weather of the first thirty six hours - torrential rain and wind so strong you couldn't keep an umbrella up. 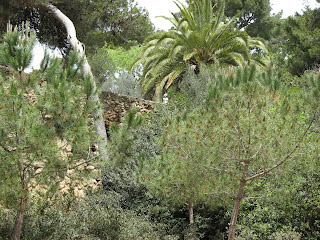 We'd intended to spend the weekend "doing" Gaudi - OK, not the most original thing to do in Barcelona, but the obvious choice when you've never been there before. In the event the weather on Saturday meant that we spent most of the time in coffee bars and shops - but then we hadn't seen each other for a while, so we had lots of catching up to do.
We did manage to see the Casa Mila on Saturday morning, and took in a concert at the Palau de la Musica Catalana in the evening. Although it wasn't designed by Gaudi, it's equally over the top. We heard Rodriguez' Concierto de Aranjuez - which had had its very first performance there in 1940. 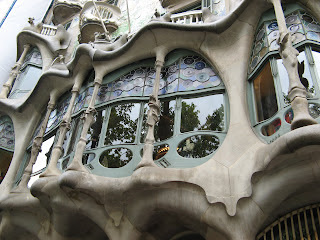 But though Sunday wasn't exactly sunny, it had at least stopped raining, and we were able to fit in a few hours sightseeing before leaving for the airport. After a short delay due to an early morning panic when I thought I'd lost all my credit cards, we headed off to the Sagrada Familie. It's odd to see a cathedral still under construction - you feel it should have been finished off five hundred years ago. 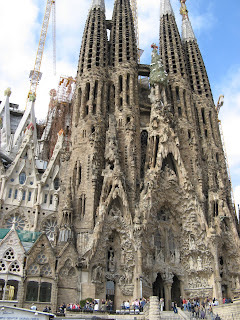 Gaudi's work was constantly inspired by nature. There are no straight lines. Everything is curved and reflects something from the natural world : wave markings on the sand, seed pods, mushrooms - even dinosaur skeletons. 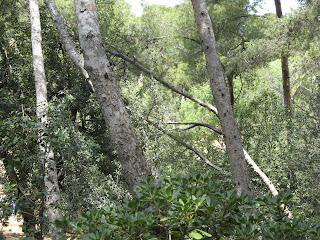 So I was really pleased that the weather cleared up enough for us to to go to the Park Guell, a park on a steep hillside (and believe me it is steep) designed by Gaudi and originally intended as a housing estate - though that never actually happened. 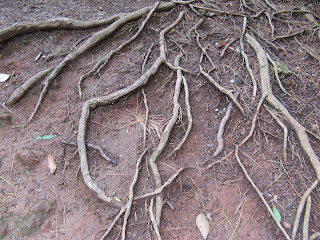 Gaudi wanted the architecture in the park to complement the lush, green vegetation, but when you're there it almost seems as if it's the other way round. I was fascinated by the angles of the tree trunks and roots, which emerged from the hillside almost as if they were trying to out-gaudi Gaudi. 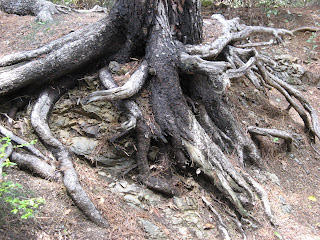 Most of the vegetation was woodland, but there were a few bits which had been planted with flowering shrubs. This bougainvillea was just coming out. - though it seemed to have been a bit battered by the rain - and there was also the biggest hedge of plumbago I've ever seen. It was too early for it to have been in flower, but it would be worth going back in midsummer just for that. 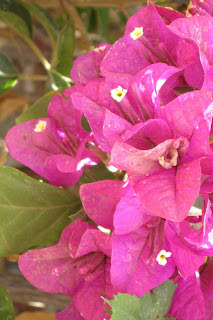 I was also amused by these aloes. By chance a couple of days before I'd seen an article on the web suggesting aloe was a great houseplant. Well, this one was certainly growing in a container. But I'm not sure I'd want it in my front room... 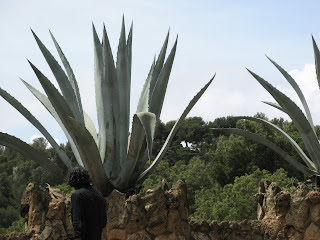 There was a colony of parakeets living in the park. When I heard the noise and saw the bright green wings, I thought at first they were the same rose-ringed parakeets that I have in my garden in London, but no - these were different. I think they are monk parakeets, native to South America, which undoubtedly arrived in the park after escaping from captivity, much as the rose-ringed parakeets of London did. They were much happier about posing for photos than our guys though. 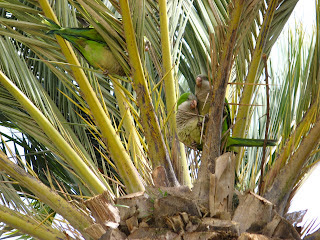 Heh... I like the idea of the tree roots trying to "out-gaudi Gaudi!" That agave is beautiful, but you would need an awfully big house for it. Maybe a container in that still-being-built cathedral?

Great photos! I think it's nice to have time to go out to visit our friends in other country.

I really enjoyed ready this and the photos. It was nice to see some of the surrounding area and not just the usual tourist pics

Thanks for the interesting tour! We enjoyed a movie a few years ago - L'Auberge Espagnole - about students in the Erasmus program in Barcelona. I wish I could remember more of the scenery - I'll have to rent the DVD and see it again.

Sue ! .. this is a quick post to say we had toured Barcelona on a day trip years ago (1998) .. loved the Gaudi experience and that amazing cathedril .. we also tourd a botanical garden not far from Lorret De Mar .. the tourist trap we were staying at ..
It was an amazing experience .. beautiful areas !
Joy

I especially enjoyed the photos of the roots.