Blast from the Past Tuesday : A Day in the (Gardening) Life of ...

This week's Blast from the Past post comes from October 2006. 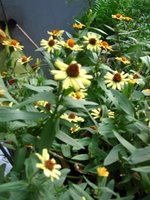 7.30 : I wake up and the house is still quiet. Saturday. I slide out of bed, go into the kitchen to make a cup of tea, and open the shutters. The outside thermometer says 18°C, so it’s just warm enough still to sit out on the balcony and have breakfast. Make the most of it – it won’t last long now that October has arrived. The balcony’s looking a mess – a general clear-up is necessary.
10.00 : Things are starting to improve. I’ve got rid of a few annuals which were looking tatty, and re-organised the containers so that the plants which are still blooming are near the windows. I don’t think the zinnias are ever going to stop. They’ve been going for over three months now, and are still showing buds. 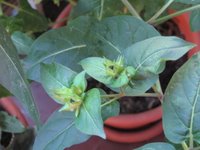 10.30 : Have spent the last half hour dead-heading and seed collecting. The mirabilis jalapa is still flowering, but is now covered with seeds. I’ve already collected enough to start a nursery, but I can always give them away. Every so often I drop one and it falls off the balcony onto the path below where the little kids play. They’re poisonous, so I go down and spend ten minutes hunting for them just in case.
11.00 : Get out my gardening books and magazines to find out what I need to be doing this month. Planting out the biennials and generally preparing for winter it seems. I’m out of compost and am going to need some for the re-potting I want to do later. Time for a quick walk to the garden centre. I’m lucky – garden centres in Milan are few and far between but ours is only two minutes away. Otherwise it’s a trip out of town, or wait and see what they’ve got at the weekly street market. Resist heroically the temptation to buy more plants.
11.40 : Two bleary teenage eyes peer round the door onto the balcony inquiring if we’re having lunch soon or if it’s worth having breakfast. Seeing me up to my elbows in stable manure, he opts for cornflakes. 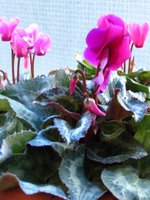 2.30 : Time for the weekend shopping. As we go in, a stand of plants catches my eye - cyclamen at ridiculously reduced prices. Look a bit closer and see why – they’re half dead. But there are three at the back that look all right. What the hell. I’ve got some coming on, but I’m not convinced they’ll bloom this winter. And mine are all red or white – these are violet. Add them to the trolley.
4.00 : Back home. Decide to sit down and blog for a while. While I’m doing it, my son wanders into the study to tell me about a video on organic produce called Grocery Store Wars which he saw at school. Says it’s funny. We watch it together and it is.
6.00 : It’s been a few days since I watered and today has been sunny, so I go out to do it. Remember that I’ve run out of liquid fertiliser. It can wait. Nearly time to stop, anyway. Just time to pot the cyclamen before dinner …

If you'd like to join in with Blast from the Past Tuesday (or Wednesday, or Thursday or whenever you like) just "revive" an old post from at least a year ago which you think people might like to see again, with a brief explanation of when it's from and that you're "reviving" it for BFTP Tuesday, and leave a comment below with a link to your blog so that people can find you.

Sue,
Here is my Blast from the Past. I chose a post close to the current date a year ago. I was on Blosgspot then. It contains one of my own poems which I had forgotten about and probably never would have seen again except for Blast from the Past suggestion. Thanks.
Goldfish

Ahhhh, a wonderful, fulfilling day you had! The day in the life of a gardener!