Blast from the Past Tuesday : Tree in a Cage

This post, in the Blast from the Past series, comes from May 2008. It was the third of a series of posts about a visit to Gardaland, a large theme park in the north of Italy. 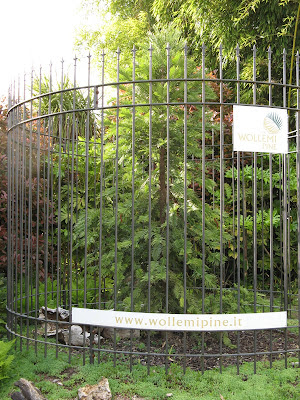 In the middle of Gardaland, there's a nine foot tree in a cage. One of the rides perhaps? Something like the Ents from Lord of the Rings or Harry Potter's Whomping Willow? Both good candidates for a theme park attraction I would have thought. But no, it's a real tree and it's not violent - it's a Wollemi Pine.

The Wollemi Pine is, in the wild, one of the rarest trees in the world. Only about a hundred trees remain (some sources say less), in a secret location in the Wollemi National Park, in Queensland Australia. Why so secret? For the same reason that this one was in a cage - to protect them from people. Who might inadvertently introduce disease, start fires and of course, rip off branches. Well, of course, if it's rare you've got to have a souvenir, haven't you?

It's also one of the oldest living plants. Fossil records date back 200 million years, and at the time the earth was covered by dense rain forest, it was found all over the world. But it was thought to have become extinct together with the dinosaurs.

When I saw the tree, my first thought was that it looked like a bright green Monkey Puzzle tree - it has the same long needles. And in fact, it's from the same family Araucariaceae (wow, I spelt that right first time.)

Discovered by chance in 1994 by one of the Wollemi Park rangers, David Noble (it has been given the official name of Wollemia nobilis), the tree is now the focus of a conservation attempt. While the original trees are being protected, they're now quite widely propagated and you can see them in various botanical gardens around the world. In Kew Gardens in London, for instance. And even in theme parks.

You can also get one for the garden if you want. You'll need a bit of space, as they grow to over a hundred feet, but one site also pushes them as good container plants, claiming that they "can be maintained in a pot almost indefinitely". Perhaps I'll get one for the balcony. Though as they were only discovered in 1994 and have only been commercially available for a couple of years, I'd like to know how they know. 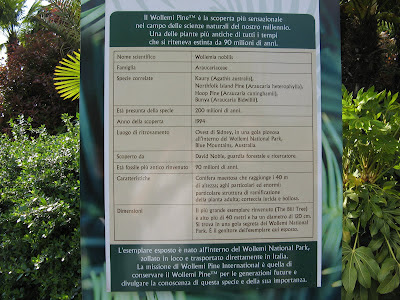 There's plenty on the web about them if you want to know more. Just Google Wollemi Pine. One of the most interesting sites has the tapescript of an Australian Broadcasting Corporation documentary on the trees, called A Green Dinosaur. It's well worth a look. Or click here for a list of botanical gardens where they can be seen, and for distributors in various countries. The site for North America is here.

It's a shame to let old posts go to waste. If you'd like to join in with Blast from the Past Tuesday (or Sunday or Monday, whenever you like), just "revive" one of your favourite old posts from at least a year ago and leave a comment below with a link to your blog so that people can find it.
Posted by Sue Swift at 7:46 pm

The Fern and Mossery said...

Wow that's amazing- thanks for sharing!

Oh what a harsh duality; to be so special and wonderous that you have to be protected, a cage put around you to keep everyone at a distance and are therefore terribly lonely.
Not that I am wonderous, but I put a cage around myself, to protect myself (from what?) and therefore I too am lonely. Thank goodness the internet can break down those barriers x

Gee, I'm glad you did it again.
Donna