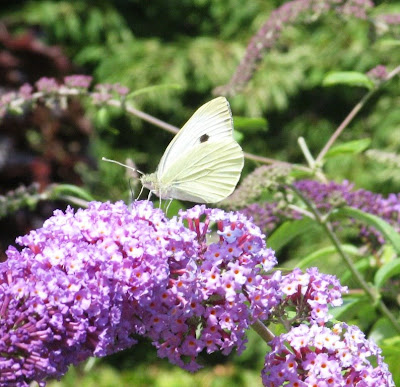 A couple of posts ago I wrote about the Mulberry tree in Charlton Park, reputedly the oldest in Britain. I wonder how many people know that behind what used to be the old stable block of Charlton House, the large Jacobean manor house that stands at the front of the park, there is a series of walled gardens. 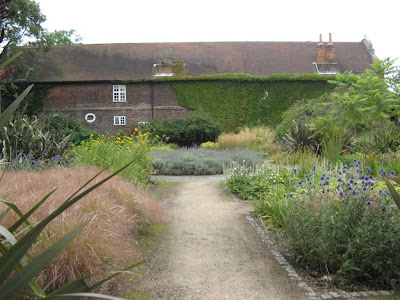 They're hidden away, behind trees and bushes, and you could easily never find them even if you walked through the main part of the park every day. I discovered them as a child - my grandparents used to take me there, and at the time one was a rose garden (which my grandmother loved) and another had a long rectangular goldfish pond with waterlilies, where I would watch the fish for what then seemed like hours (probably about five minutes!) 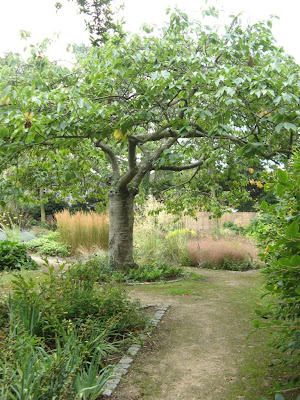 The rose garden and goldfish pond are long gone, and there are five gardens not two. In addition to the two large rectangular ones which I remember, there are also three smaller, square gardens. I don't think many people go there. There were a couple of elderly people sitting quietly in the sunshine, but they were almost deserted. 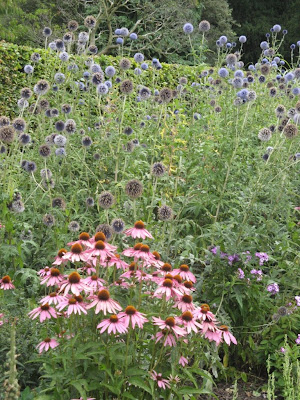 I could have stayed in the gardens all morning. Each one seemed more peaceful than the next. 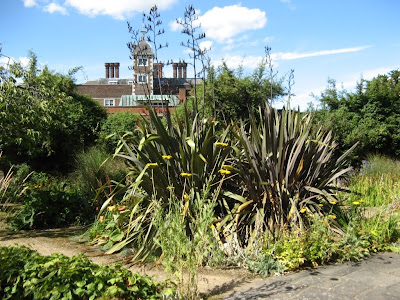 They are designed slightly differently one from the other. Some are quite formal, with neatly cut grass and shrubs. Others have huge swathes of large, dramatic looking plants and grasses. One has been designed as a butterfly garden. and in one, tucked in amongst the other plants, someone was growing their courgettes. 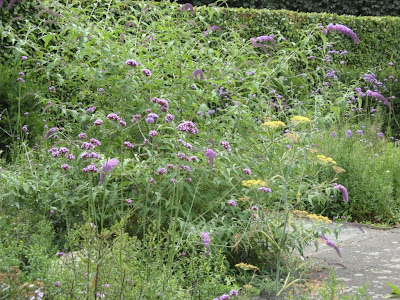 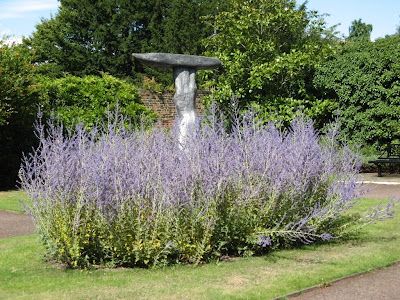 I loved this central bed with its anvil-like central sculpture and these wonderful tall lilac flower spikes. Can anyone identify them? 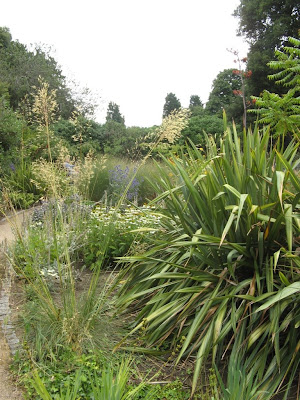 But my favourite was one of the smaller gardens which had this intriguing little gateway. I could have sat quietly in there for hours - except that you couldn't help but want to know what was on the other side .... 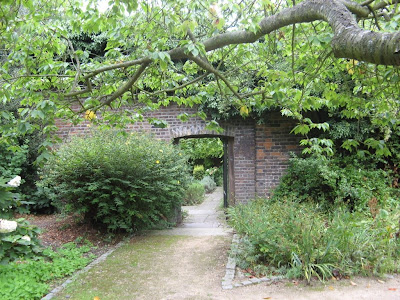 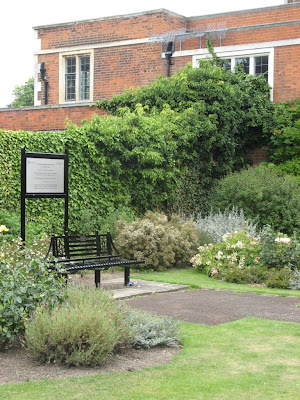 And that just about summed it up really. The gardens were a little oasis of peace and tranquillity where you could forget you were in the middle of London, forget you had work to to, and forget you had problems to solve. I'm glad I found them. 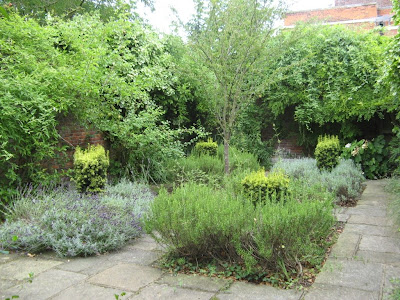 I am glad you found them too. Thanks for sharing!

The gardens look fantastic. I do like walled gardens, they're so secretive. Hope the work you're doing on that overgrown garden is coming along, and that your back's ok.

Sometimes we find that the best places are those which are least discussed or known. The whole look of the place is very serene and makes me wish that i could spend some time with myself there.

Heavenly, thank goodness for spaces like that! When things get too much there's nothing better than a peaceful commune with and a big hug from mother nature.

Lovely and so peaceful. I believe the purple flowers could be perovskia, Russian Sage.

How LOVELY! The gardens look beautiful and I would have had a very hard time pulling myself from them.

This looks a beautiful place in the middle of the city. Walled gardens have a peacefulness all their own.

I love that walled garden - and its even better that its off the beaten track!

Yes, Russian Sage. I have a couple and love love love it. It's fragrant, blows gently in the wind and is a great foil for basically any color and any plant!! I love these pics - very inspirational. I think I need to take a tip and reduce the NUMBER of different colors for a more soothing palate. Or at least that's what I'm thinking at this moment...

great pics specially cone flowers. the first one resembles so much like buddleia.

I was just looking through Google images to find some pictures of the gardens at Charlton House and found your blog. I designed the gardens 8 years ago and was wanting to update my website with some images as I rarely get to go there to take shots myself. Would you mind if I quoted you on my website, I just love the words you used and the experience you described of being in the gardens. In particular I love the image of the manor house with the gardens in the foreground, the second one on the page - would you mind if I used this? I hope you don't mind. Many thanks, Jen Herrington

Jen - You are more than welcome to quote me or use any of the photos you'd like to. I'd be honoured. I've tried to trace you back, but your google profile page doesn't lead to another website or e-mail address. I'm off to Google you, but if that doesn't work, I hope you see this.
Sue